You are here: History Lists · Art · ﻿List of 10 Most Famous Rembrandt's Paintings

Works of Rembrandt Harmenszoon van Rijn (1606-1669) are admired for an outstandingly realistic depiction of human emotions and feelings with all their nuances, and brilliant use of light and shadow. The Dutch painter produced a large number of paintings (over 300 in total) but many works that were attributed to the artist for centuries are now disputed because his many followers and imitators created nearly perfect copies of his style. Listed below are 10 most famous and most admired Rembrandt's paintings. 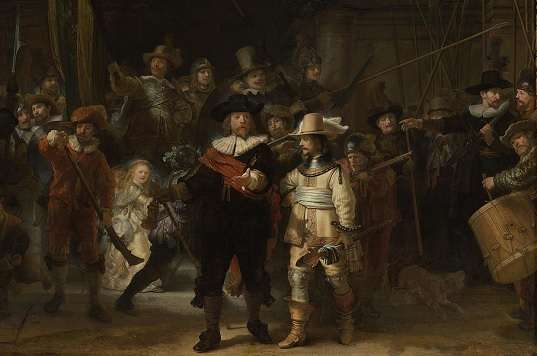 Without a doubt the most famous of all Rembrandt’s paintings, The Night Watch is a group portrait of the militia company of Captain Frans Banning Cocq and Lieutenant Willem van Ruytenburgh (in the center). Painted in 1642, The Night Watch isn’t a night scene as long believed. Cleaning in the mid-1940s revealed that it is set in daylight. During relocation in the 18th century, the most famous Rembrandt’s painting was trimmed, most notably on the left side which resulted in the loss of some characters but it also changed the composition of the painting by making the lightly clothed girl and Lieutenant the dominant figures of the scene. The Night Watch is housed in the Rijksmuseum in Amsterdam.

The Storm on the Sea of Galilee 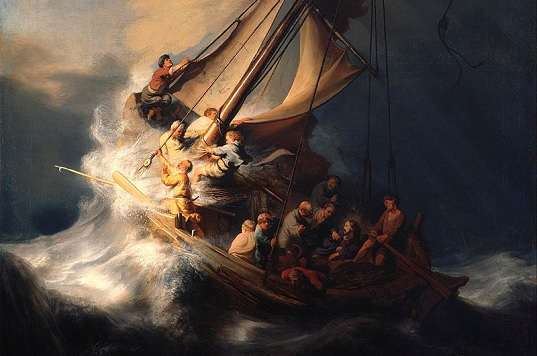 Painted in 1633, The Storm on the Sea of Galilee depicts the miracle of Jesus calming the storm. The only Rembrandt’s painting in a seascape setting has unfortunately been lost for more two decades. In 1990, it was stolen from the Isabella Stewart Gardner Museum in Boston by two thieves disguised in police officers. Besides The Storm on the Sea of Galilee, the thieves have also stolen Rembrandt’s Portrait of a Lady and Gentleman in Black and 11 other major artworks with a total value of $300 million. In 2013, the FBI announced that they know who stands behind one of the largest art heists in history but the frames that used to hold the masterpieces still hang empty. 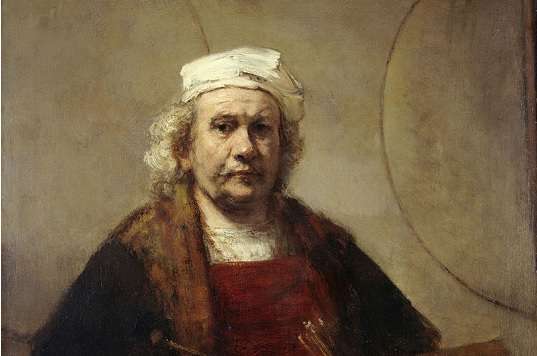 One of many Rembrandt’s self-portraits shows the artist at work. He is depicted holding his palette, brushes and maulstick with two enigmatic circles in the background. There are several theories about the meaning of the two circles, ranging from the map of the word to various symbolic meanings. However, we will probably never know why Rembrandt painted the two circles and what he is trying to communicate. Painted between 1665 and 1659, the Self-Portrait with Two Circles is considered as one of the greatest masterpieces of Rembrandt’s later years and one of the best self-portraits he ever created. The painting is today on public display in the Kenwood House in London. 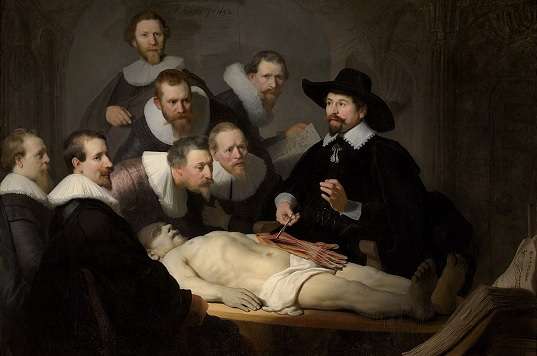 Painted in 1632, The Anatomy Lesson of Dr. Nicolaes Tulp depicts the Dutch surgeon and the later mayor of Amsterdam Dr. Nicolaes Tulp holding an anatomy lesson on the corpse of the executed criminal Aris Kindt. In the 17th century Holland, there was one public anatomy per year that was performed on the body of an executed criminal. The painting which was commissioned by the Amsterdam Guild of Surgeons for their board room is today housed in the Mauritshuis art museum in The Hague.

Bathsheba at Her Bath 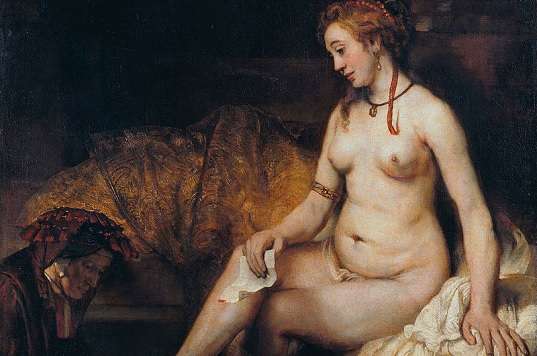 The Bathsheba at Her Bath (finished in 1654) depicts Bathsheba, wife of Uriah the Hittite at the moment she was seen by King David from the roof of his palace. According to the Biblical story, David had her then brought to him to sleep with her. Since she became pregnant, David recalled her husband from the army, hoping that he would sleep with his wife and think that he is the father of the child. But because Uriah didn’t consume his marriage, the King sent him to sure death by ordering his general to place him in the front lines. After Uriah’s death, David married the widowed Bathsheba. The painting is today displayed in the Louvre Museum in Paris. 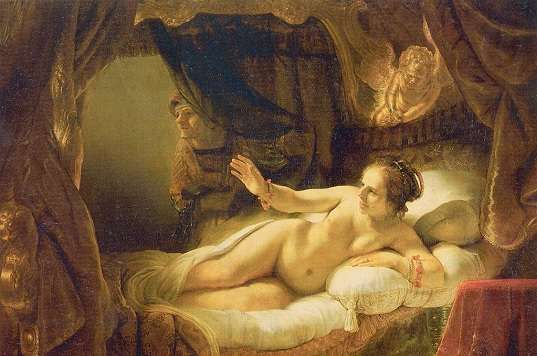 Danaë (finished in 1636) isn’t only one of Rembrandt’s best nude paintings but one of the greatest masterpieces of the celebrated Dutch artist. Just like the painting’s title suggests, it depicts Danaë, the mother of the ancient Greek mythological hero Perseus. The life-sized depiction of Danaë is thought to show her welcoming Zeus who came to her in the form of golden rain. In the 1770s, the painting was bought by Catherine II of Russia and has been housed in the Hermitage Museum in Saint Petersburg ever since.

The Conspiracy of Claudius Civilis 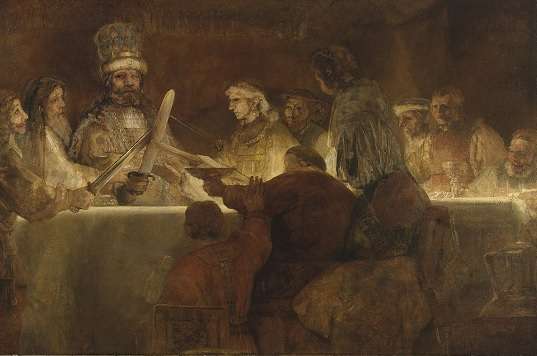 The last Rembrandt’s painting with a secular theme (completed in 1661-62) depicts the leader of the Batavian Rebellion (69-70 AD) Claudius Civilis and the Batavi chiefs promising to join the rebellion against the Roman Empire. The Conspiracy of Claudius Civilis was commissioned for the new Town Hall in Amsterdam but it was soon returned to Rembrandt who dramatically cut it down (to one quarter of the original size) and slightly modified it in order to make it easier to sell. In the 18th century, the painting was acquired by the Royal Swedish Academy of Arts that later deposited it in the National Museum in Stockholm where it has remained ever since. 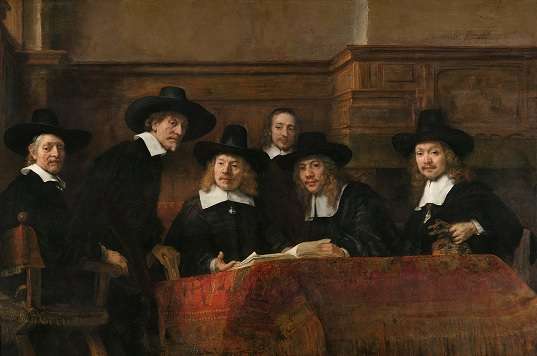 Also referred to as the Syndics of the Drapers’ Guild, this painting (completed in 1662) is a group portrait of the syndics of the Amsterdam Drapers Guild whose job was to evaluate the quality of fabric offered by weavers to the guild members. The exception is the man wearing calotte in the back who is a servant. The painting was commissioned by the Amsterdam Drapers Guild for their guild hall that housed it until the early 1770s. Today, The Sampling Officials is among the greatest treasures of the Rijksmuseum in Amsterdam.

The Return of the Prodigal Son 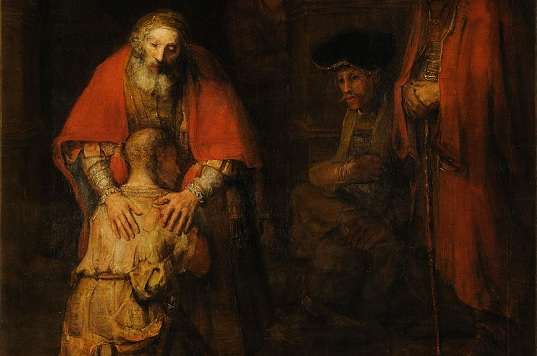 The Return of the Prodigal Son is among the last works of the celebrated Dutch painter and is believed to be completed shortly before his death. The life-sized painting depicts the Biblical story of the prodigal son at the moment he returns to his father, regretting his sins and begging for forgiveness. There is no agreement about who are the other figures in the painting, most notably who is the unforgiving older brother. According to some critics, it is the young man at the doorway in the back but according to others, it is the standing man on the right. The painting is one of the highlights of the Hermitage Museum’s Western European Art collection.

Jacob Blessing the Sons of Joseph 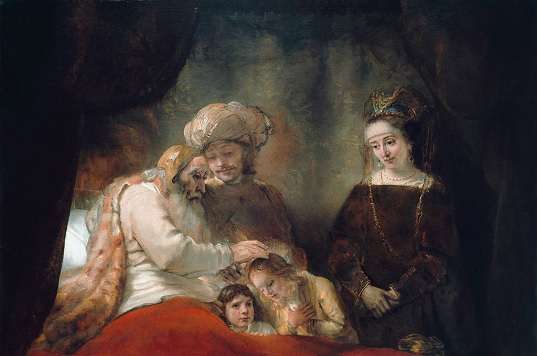 This painting (completed in 1656) depicts Joseph, the beloved son of Jacob bringing his sons Ephraim and Manasseh to his dying father to give them his blessing. But unlike in the Biblical story in which Jacob is blessing Ephraim and Manasseh simultaneously, he is blessing only the younger Ephraim. Rembrandt also added Asenath, Joseph’s wife and mother of his sons who wasn’t present in the Biblical account of the Jacob’s blessing of Joseph’s sons. This Rembrandt’s masterpiece is owned by and displayed in the Museumslandschaft Hessen Kassel in Germany.