The great painters of the Renaissance period, many of whom focused on religious themes were often commissioned by well-to-do patrons including the Pope himself. Religion was infiltrated in everyday life in this era, deeply resonating with both the painters and those they worked for. Many of these religious paintings are among the greatest works of Renaissance art as a whole.

Wedding at Cana by Paolo Veronese 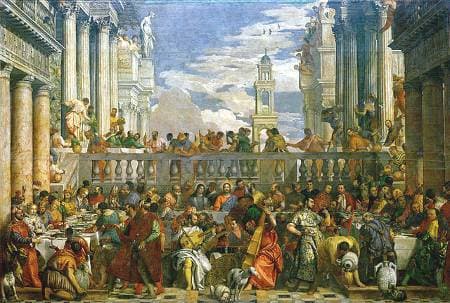 The Wedding at Cana (or The Wedding Feast at Cana) by Paolo Veronese is an oil on canvas that was painted in 1563 for the Benedectine Monastery of San Giorgio Maggiore in Venice. It depicts the Biblical Wedding Feast at Cana where according to the New Testament, Jesus performed his first miracle by turning water into wine. The Biblical story, however, is set into Veronese’s time although some figures are depicted wearing antique clothing. It is said that Veronese painted himself among the 130 participants of the wedding feast (clothed in white with a viol next to Titian and Bassano). The painting with dimensions of 666 cm x 990 cm (262 in x 390 in) is displayed in the Louvre Museum in Paris.

The School of Athens by Raphael 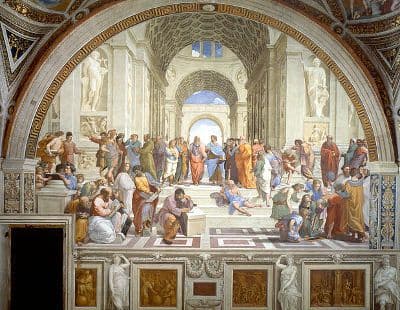 One of four frescoes by Raphael in the so-called Raphael Rooms in the Apostolic Palace in Vatican was painted by the Italian Renaissance artist between 1509 and 1511. The School of Athens revels Raphael’s interpretation of philosophy as a divine form of knowledge, with Plato and Aristotle placed in the center of the scene, just like Jesus is in the center of Paolo Veronese’s The Wedding at Cana. In total, twenty-one ancient Greek philosophers are painted, engaging in lofty discourse. Raphael’s fresco doesn’t have religious character as such but its location within a Greek cross-shaped building in Vatican has been interpreted as an attempt to reconcile Christianity and pagan philosophy. 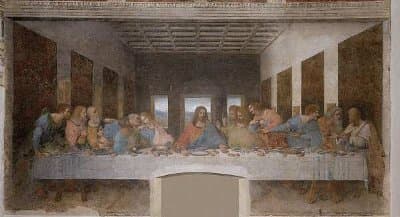 The mural on the back wall of the dining hall of the Dominican convent of Santa Maria delle Grazie in Milan, Italy, was painted from 1495 to 1498. It differed from other frescoes of the era in that da Vinci created it by using experimental pigments directly on the dry plaster wall. But even before it was finished, it suffered from paint flaking off the wall. Da Vinci repaired the damage but it continued to crumble and was inadvertently damaged over the years both by the effects of time and unfortunate events such as Napoleon’s troops using the wall for target practice and the 1943 bombing which destroyed the room’s roof and exposed the fresco to the weather elements. Not much of the original painting survived and what can be seen today are mainly repairs.

The Creation of Adam by Michelangelo 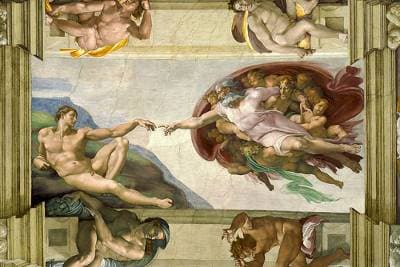 The famous fresco on the ceiling of the Sistine Chapel in the Vatican City was painted from 1511 to 1512. Unfortunately, Michelangelo’s masterpiece and one of the most famous works of both High Renaissance and religious art suffered from candle smoke damage, going back for centuries, which caused the fresco to darken and assume a gloomy shadow. In the 1980s, the ceiling of the Sistine Chapel went through an extensive restoration which revealed colors and details that were hidden for centuries. The restoration, however, has also caused a great deal of controversy among art historians. 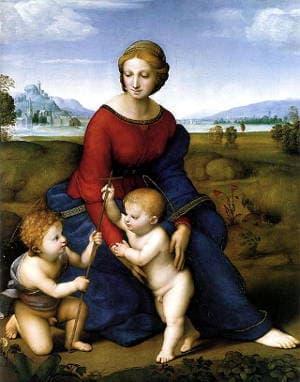 The artist painted this oil on board in 1505 whilst he was in Florence; though the painting is now housed in the Kunsthistorisches Museum in Vienna, Austria. Madonna del Prato, also known as Madonna of the Meadow depicts Virgin Mary looking down to baby Jesus and his cousin John the Baptist who is kneeling and offering a cross to Jesus. The painting was created for Taddeo Taddei and remained in the Taddei family until 1660s when it was sold to Ferdinand Charles, Archduke of Austria. 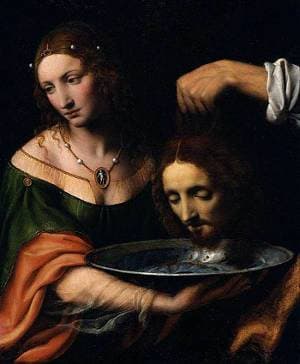 Salome with the Head of Saint John the Baptist was painted by Bernardino Luini in the first half of the 16th century. The painting depicts a scene from the Gospel of Mark, when Salome demands the head of John the Baptist for having danced before King Herod and his guests. The King who promised to give her anything she wants, reluctantly agreed and had John the Baptist beheaded in the prison. Luini’s painting shows the moment when her request is met. The painting is displayed in the Museum of Fine Arts Boston. 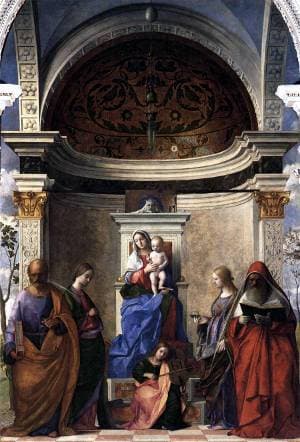 This oil on canvas was painted by Giovanni Bellini in 1505. It is one of the finest examples of the so-called sacra conversazione or “sacred conversation” which was developed by Renaissance Italian artists and replaced the rigid polyptych form of the earlier periods. Virgin Mary with the baby Jesus in the center are depicted with four Christian saints – St. Peter the Apostle and St. Catherine of Alexandria at the left, and St. Gerome and St. Lucy at the right - and an angel playing a violin at the foot of the altar. The painting is housed in the San Zaccaria church in Venice, Italy. 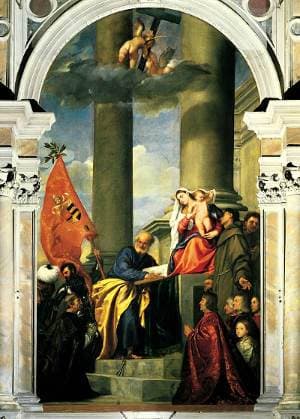 Created from 1519 through 1526, the painting depicts the Virgin and the Child on the top of a raised platform. The commissioner of the painting, Jacobo Pesaro is shown kneeling before the Virgin and presented to her by Saint Peter. The red banner with papal arms is held by an unknown knight who also holds two Muslin prisoners, probably symbolizing Pesaro’s success as the commander of the papal fleet. At the right is depicted Saint Francis of Assisi who presents five kneeling members of the Pesaro family to baby Jesus. Titian made the painting for Pesaro chapel in the Frari Basilica in Venice where it remains until today.

The Last Judgment by Hieronymus Bosch 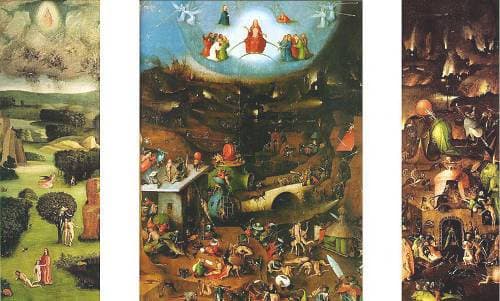 The triptych that was created by the Dutch painter sometime between 1505 and 1510 consists of three panels: the left panel depicts the Garden of Eden with Adam and Eve being tempted by the Serpent on the tree of the knowledge of good and evil, the central panel depicts the Last Judgment with Jesus on the throne as the judge of the world, while the right panel depicts the Hell which is thematically very similar to the central one. But instead of Jesus, it includes the Satan who receives the souls of the damned. Bosch’s triptych is currently owned and displayed in the Academy of Fine Arts in Vienna.

The Tower of Babel by Pieter Bruegel the Elder 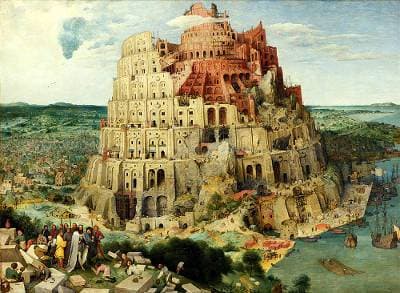 Like its name suggests, Bruegel’s painting depicts the Biblical Tower of Babel which was built by the unified humanity with an aim to reach the heaven. Angered by the building project, God decided to prevent it by scattering the people throughout the world and confusing their languages so that they were unable to return and continue from where they left off. The painting that was created in 1563 can be seen in the Kunsthistorishes Museum in Vienna.