The Flemish painter Peter Paul Rubens (1577- 1640) was one of the foremost figures of Baroque painting. A highly prolific artist who is credited with more than 1000 works was a master of drama and color which was used to create both contrast and harmony as well as to emphasize emotion, sensuality and tension. Apart from religious and allegorical themes for which he is perhaps best known, Rubens also painted landscapes, portraits and historical subjects. Some of his best works include: 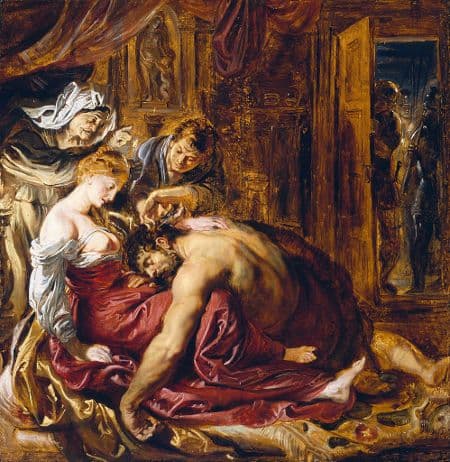 Measuring 185cm x 205cm (73in x 81in), this Rubens’ masterpiece was painted in 1609-10 for Nicolaas Rockox, an influential Antwerp lawyer, collector and patron of arts. The painting was obviously inspired by the Biblical story of Samson and Delilah and depicts the moment when Delilah’s servant is cutting the hair of Samson while asleep in his lover’s lap. The painting also includes a mysterious old woman who perhaps symbolizes the future and Philistine soldiers waiting outside the room. The painting can be seen in the National Gallery (London) that bought it in 1980 for over $5 million. 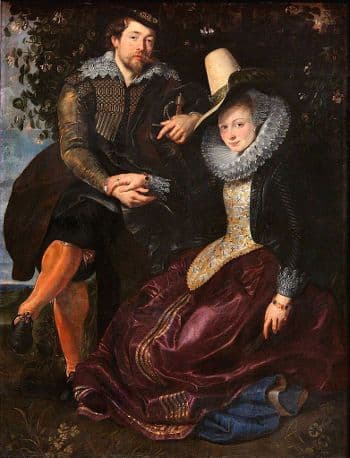 The Honeysuckle Bower is a self-portrait of the painter and his first wife. Measuring 178cm x 136.5cm (70in x 54in), the oil painting was painted soon after the couple’s marriage in 1609 and depicts the newlyweds sitting in a honeysuckle bower. It is full of symbolism but there are almost exclusively symbols of love. For example, honeysuckle is a traditional symbol of love, just like the surrounding garden. Likewise, the newlyweds are leaning towards each other which reflects their affection and devotion. The painting is owned and displayed by the Alte Pinakothek gallery in Munich.

The Descent from the Cross 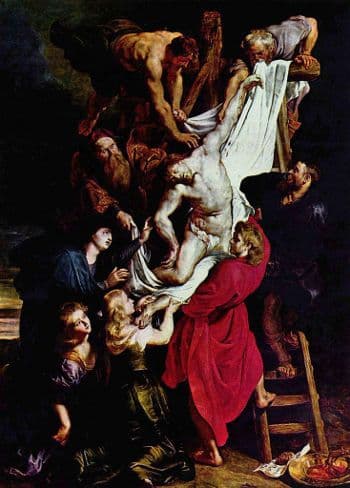 The Descent from the Cross is the middle piece of The Elevation of the Cross, a triptych that was painted by Rubens for the Confraternity of the Arquebusiers for their altar at the Cathedral of Our Lady in Antwerp. With the exception of a brief period in the late 18th and early 19th century, it has been located in the Antwerp’s Cathedral ever since. This particular panel was finished in 1614 and depicts lowering of the Christ’s body from the cross.

The Assumption of the Virgin Mary 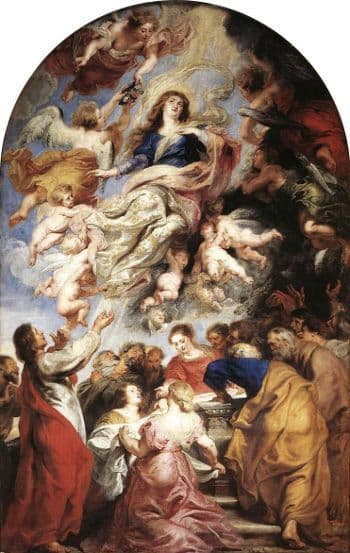 This is another Rubens’ masterpiece that can be admired in the Cathedral of Our Lady in Antwerp. Like the title suggests, the central theme is the ascend of Virgin Mary into Heaven. The actual Assumption is depicted in the upper half of the painting, while the lower part portrays Mary’s empty tomb which is surrounded by the 12 disciples and 3 women who are though to represent Mary Magdalene and the Virgin’s two sisters. The panel, which measures 490cm x 325cm (190in x 128in), was finished around 1626 as an altarpiece for the Antwerp’s Cathedral.

The Origin of Milky Way 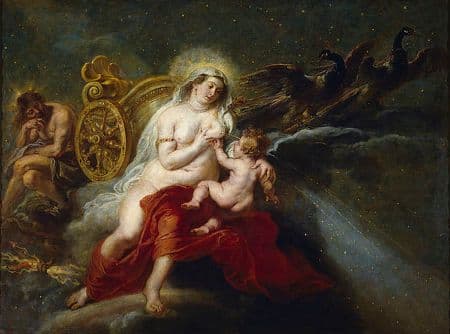 Finished around 1637, this painting was commissioned, along with a few others, by Philip IV of Spain to decorate Torre de la Parada, the former royal hunting lodge not far from Madrid. The painting, which measures 181cm × 244cm (71in x 96in), has been inspired by the Greco-Roman myth about the formation of the Milky Way and portrays Hera (Juno in Roman mythology) spilling her breast milk when pulling away from the baby Heracles (Hercules). The painting also includes Zeus (Jupiter) observing the scene in the background. It is now displayed at the Prado Museum in Madrid.

A View of Het Steen in the Early Morning 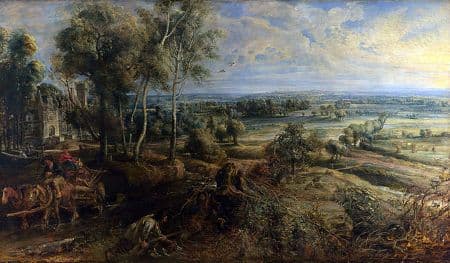 Also known simply as Het Steen, this landscape painting is one of the prime examples of Rubens’ late period and according to many art critics, one of the best landscape paintings of the Baroque era. Measuring 131cm x 229cm (52in x 90in), the painting depicts the landscape surrounding the artist’s estate Het Steen near Antwerp but it also includes his manor, a cart and a hunter. The masterpiece, which was finished around 1636, is today owned and displayed by the National Gallery (London) which acquired in the 1820s as a donation by Sir George Beaumont.

The Hippopotamus and Crocodile Hunt 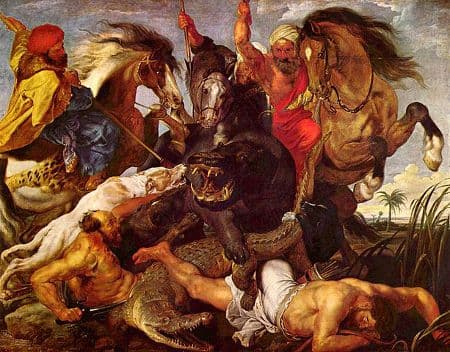 The Hippopotamus and Crocodile Hunt was commissioned by Maximilian I, Elector of Bavaria to embellish the old Schleissheim Palace. The painting, which measures 248cm x 321cm (98in x 126in), shows a group of hunters and hunting dogs attacking a hippopotamus and crocodile. Widely considered as one of the best Rubens’ works, the piece is also one of the prime examples of the artist’s mastery of drama, which is further highlighted by color, composition and texture. The famous hunting painting is today housed in the Old Pinakothek in Munich. 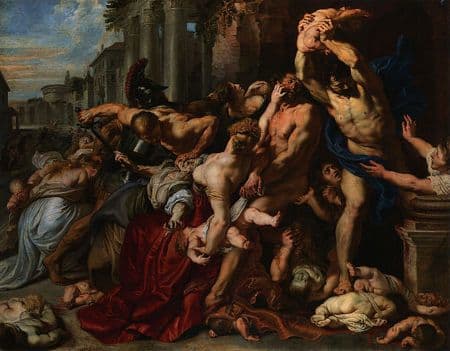 Rediscovered in 2001 and sold for $117 million at an auction one year later, the Massacre of the Innocents is the first of two Rubens’ paintings that were inspired by the same title Biblical story. The new owner, the Canadian businessman and collector Kenneth Thomson, 2nd Baron Thomson of Fleet (1923 - 2006) kindly made the painting available for public viewing by loaning it to the National Gallery in London and later donating it to the Art Gallery of Ontario (Toronto) where it remains on display to this day.

The Disembarkation at Marseilles 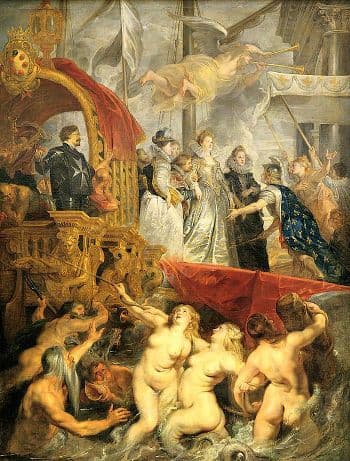 This painting is a perfect example of Rubens’ ability to turn an unremarkable event into something extraordinary. One of the 21 paintings that constitute the so-called Marie de Medici Cycle depicts the arrival of Marie as the new Queen of France. She is portrayed disembarking a ship escorted by her sister and aunt as well as various mythological figures who guarded her on the way to Marseilles. Commissioned by Marie de’ Medici herself, the painting can be seen in the Louvre, just like the other 20 pieces of the Cycle.

Consequences of War (Horror of War) 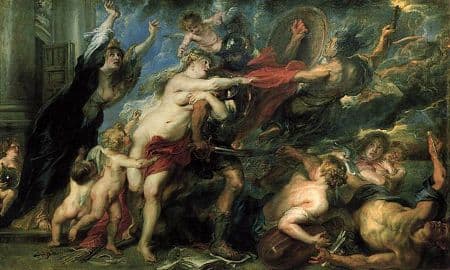 Painted in 1639 for Ferdinando II de’ Medici, the Grand Duke of Tuscany, this painting is thought to symbolize the horrors of the Thirty Years’ War (1618-1648) which was at the time at full swing. Everything in the painting is somehow related to war and its destruction, with the Roman God of War, Mars being placed in the very center of the painting. Also depicted is the Roman Goddess of Love, Venus who strives to halt Mars and prevent war but their bodily positions and facial expressions reveal that her pleas are in vain. The painting which measures 206cm x 345cm (81in x 136in) is housed in the Palazzo Pitti in Florence.