You are here: History Lists · Other · ﻿List of 5 Most Mysterious Underwater Structures

Hidden deep below the sea surface is a world which still awaits to be discovered. Less than 10 percent of the ocean floor and less than 1 percent of the ocean itself have been explored so far. Found in that tiny fraction of the world's oceans were amazing creatures that survive in seemingly unsurvivable environments but also found were submerged man-made structures, some of which seem to oppose everything we know about our ancient past.

Off the coast of the Yonaguni island, the most southern of the Ryuku Islands in Japan is located one of the world’s most mysterious underwater structures - the Yonaguni Monument. It was discovered by a local diver in the 1980s who was stunned by massive rectangular formations with perfect 90 degree angles, straight walls, steps, columns and what appears to be a human face carved in the rock. Soon, a team of scientists led by Masaaki Kimura visited the underwater structure and concluded that it had to be man-made. The only logical explanation is that the structure was built when the site was above sea level which was around 10,000 years BC or according to the latest findings, about 3,000 to 2,000 years ago when it was sunk by an earthquake. Not all, however, are convinced that the Yonaguni Monument was made by human hands.

The Bimini Road is a 0.5 mile (0.8 kilometer) long submerged structure in the shape of the letter “J”. The structure off the coast of the island of North Bimini in the Bahamas consists of huge rectangular and semi-rectangular blocks that are arranged in perfect geometric patterns. Most scholars believe that it is a natural formation but many believe that its scale and precision cannot be work of nature. If the Bimini Road, however, is man-made, it must have been built when the area was above the sea level which was thousands of years ago. The mysterious underwater structure is thought to be ruins of a harbor or a temple but it has also been suggested to be a potential site of the legendary Atlantis.

The Cuban Underwater City is another underwater structure that raises more questions than it answers. What appears to be ruins of a submerged city with corridors and buildings including massive granite complexes, pyramids and circular structures is located off the coast of western Cuba as much as 2,000 feet (650 meters) below the sea level. According to the scientists, it would take about 50,000 years for the alleged city to be submerged to its current depth. As a result, many expressed doubt that the researchers from a Canadian company really discovered a lost ancient city in 2001. Unfortunately, sonar and underwater video robot images are everything that the researchers have so far about the site. Until more is known, it is impossible to say what is down there although the possibility that it is really a lost ancient city cannot be ruled out either. 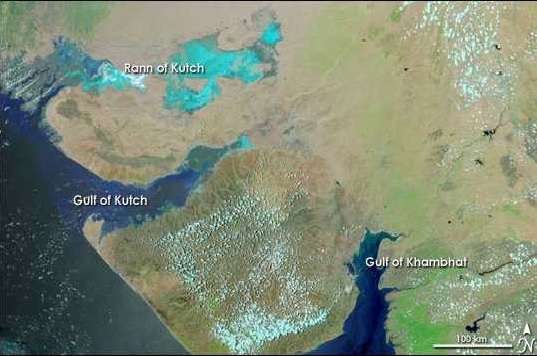 The Underwater City in the Gulf of Cambay, also known as the Gulf of Khambhat Cultural Complex is a huge submerged city off the western coast of India, 120 feet (36 meters) below the sea level. It was discovered accidentally in 2001 by Indian oceanographers who found enormous geometrical structures with a side-scan sonar. The site was soon investigated and identified as undoubtedly man-made. Marine archaeologists found construction material, sections of walls, sculpture, pottery and human remains. These were carbon dated and found to be about 9,500 years old. This corresponds with the end of the Ice Age some 9,000 to 10,000 years ago when the melting of the ice caps elevated the sea levels and probably also submerged the ancient city in the Gulf of Cambay. If the Underwater City in the Gulf of Cambay is really as old as it appears to be, it predates the earliest known cities in Mesopotamia for as much as 5,000 years.

A UNESCO World Heritage Site and officially the world’s oldest submerged town is located just off coast of southern Peloponnese region of Laconia, Greece, 10 to 13 feet (3 to 4 meters) below the sea level. It covers an area of 322,917 square feet (30,000 square meters) where have been found buildings, streets, courtyards, tombs and graves. Pavlopetri (named after the nearby islet of same name) was built about 5,000 years ago which means that it predates the golden era of ancient Greece for over two millennia. The city is believed to be submerged about 1,000 BC by an earthquake and according to some scholars, possibly inspired the Plato’s story about Atlantis.