You are here: History Lists · Other · 10 Greatest Love Stories in History

The stories of lovers who believed in each other and their love even if the whole world was against them still inspire and often, make us sad. A closer investigation of the greatest love stories in history reveals that many of the most famous lovers met a tragic end. They did, however, show us that true love is stronger than anything else in the world. And it is the love that they had we are all hopping to find someday. Of course, with a happier ending. 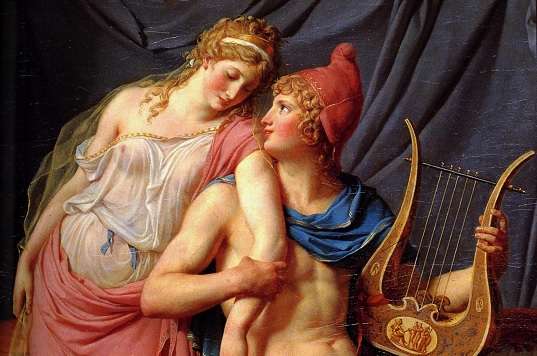 According to Greek mythology, the love between Paris and Helen provoked the downfall of Troy. The story begins with the Trojan prince Paris being chosen to decide which of three goddesses – Hera, Athena and Aphrodite – is the fairest. He chose Aphrodite because in return she promised him the most beautiful woman in the world. And the most beautiful woman was Helen of Sparta who, however, was married to King Menelaus. A few years later, Paris went to Sparta and took Helen to Troy by which he triggered the Trojan War. Paris was mortally wounded during the fall of Troy, while Helen returned to her husband in Sparta. 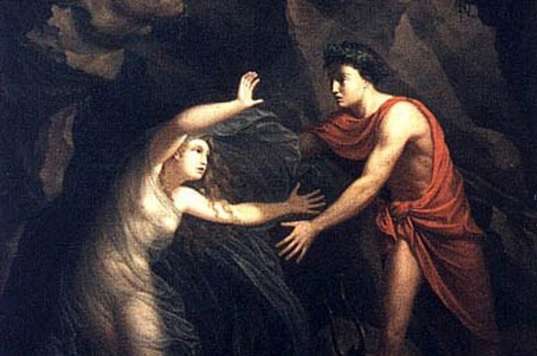 The ancient Greek mythological hero Orpheus is best known for his beautiful music which charmed everyone, even the stones and wild beasts. But he is also known for his deep love for his wife Eurydice. When she died from a snake bite, Orpheus decided to go to the Underworld and bring her back. With his music, he charmed the gods of the Hades and they allowed him to take Eurydice back with him. But he was told he must not look back until they escape the Underworld. When they reached the portals of Hades, Orpheus turned back to see if Eurydice is following him and she immediately disappeared back in the world of the dead. 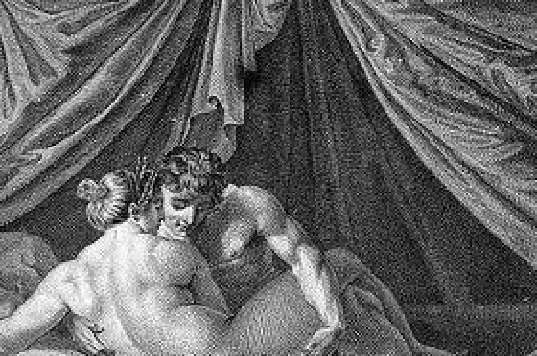 The love between the Egyptian pharaoh Cleopatra and Mark Antony went into history for their tragic end. Both committed suicide after they were defeated by the Romans under Octavian (the later Augustus) although Cleopatra hesitated. After Mark Antony’s suicide (he stabbed himself after receiving a false news that his lover was dead), Cleopatra tried to negotiate with Octavian. According to most sources, she killed herself by inducing an asp to bite her when she realized that she cannot “charm” Octavian. Cleopatra and Mark Antony are said to be buried together but the location of their tomb remains a mystery. 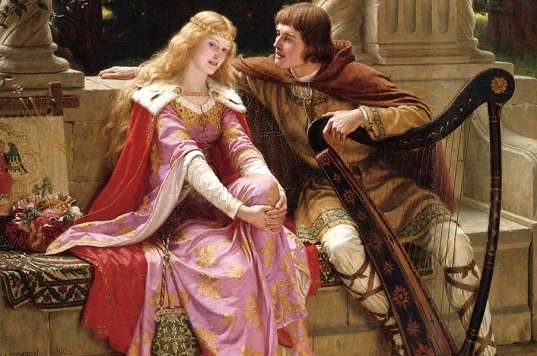 Love story of Tristan and Iseult has been popularized in the 12th century France. It is thought to be inspired by an older Celtic legend. There are several versions of the story about the adulterous lovers but they all more or less follow the same outline. Tristan and Iseult who is supposed to marry Tristan’s uncle King Mark ingest a love potion and fell madly in love on their way to Cornwall. Iseult marries King Mark but the love potion makes the lovers unable to resist each other. They pursue their affair until they are finally caught by Iseult’s husband. They manage to escape death but Iseult is forced to return to Mark. Tristan leaves Cornwall and marries another woman named Iseult. But when he is mortally wounded by a poison lance, he calls for his only true love. The story ends with Tristan dying of despair, convinced that Iseult does not want to come to him, while Iseult dies of grief after finding her lover dead. 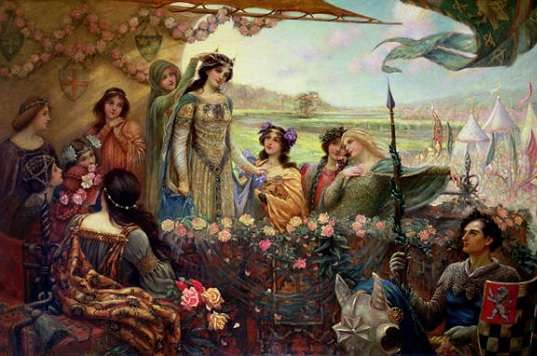 The story of Lancelot and Guinevere is a part of the Arthurian legend. It is thought to have been inspired or influenced by that of Tristan and Iseult. Just like the latter, Lancelot and Guinevere are adulterous lovers. Guinevere is married to King Arthur who, just like King Mark does not suspect anything at first. He eventually finds out about his wife being unfaithful to him with one of his most loyal knights. The Knights of the Round Table split into two groups, supporting either Arthur or Lancelot. After several fierce battles between the two men, Guinevere returns to King Arthur but the destruction of the Round Table enables Mordred to challenge Arthur. The legendary king kills his rival but he is mortally wounded. Guinevere, devastated for being responsible for the destruction of the Round Table and subsequent Arthur’s downfall enters a convent. Lancelot enters a hermitage and eventually becomes a priest. Both spend the rest of their lives in repentance. 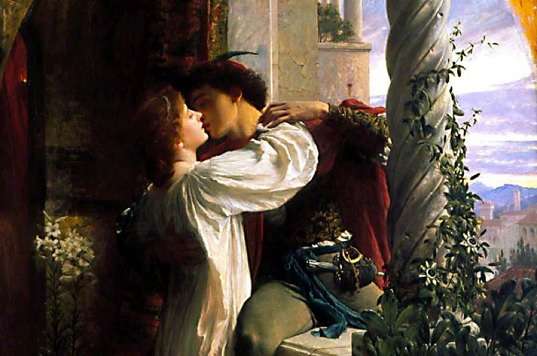 Probably the most famous love story of all was written by the celebrated English poet and playwright William Shakespeare sometime in the 1590s. Shakespeare’s story of the tragic love between Romeo and Juliet is probably based on Arthur Brooke’s poem The Tragical History of Romeus and Juliet that was published in the 1560s. The latter is believed to be an English translation of a novella of Italian writer Matteo Bandello. But even his Romeo and Juliet are not original. The story reveals a major influence of ancient tragic love stories, most notably of the Roman story of Pyramus and Thisbe whose families despise each other and prevent the lovers to be together. Just like Pyramus kills himself, falsely believing that Thisbe is dead, Romeo also commits suicide for mistakenly believing that Juliet is dead. Thisbe follows her lover in death upon discovering his dead body which is exactly what Juliet does when she finds Romeo dead. Both Thisbe and Juliet stab themselves but Romeo, unlike Pyreus who stabs himself with his sword, drinks a poison. 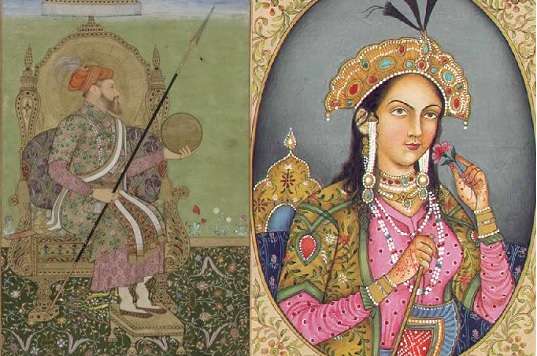 Their names may largely be unfamiliar to most people in the West but their love produced a monument that is famous all over the world – Taj Mahal. Shah Jahan and Mumtaz Mahal were Mughal Royal couple who shared a loving marriage until Mumtaz died while giving birth to their 14th child. Shah Jahan was devastated by his wife’s death and plunged into deep grief that affected him both emotionally and physically. But his grief inspired him to build one of the world’s greatest architectural masterpieces to serve as the final resting place of his beloved wife. Shortly after completing Taj Mahal, Shah got ill and was overthrown by his eldest son. He spent the rest of his life in house arrest and was buried next to his wife. The legend has it that he planned to build an exact copy of Taj Mahal in black marble on the opposite bank of the river Yamuna but the works never started. 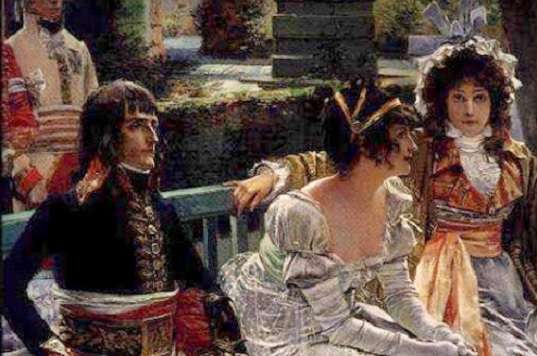 The relationship between Napoleon and Josephine, a six years older widow with two children was turbulent from the very start. Only two days after their wedding day, Napoleon left on a military campaign in Italy. Josephine who stayed behind in Paris soon started an affair with lieutenant Hippolyte Charles. Napoleon was infuriated when he found out about his wife’s infidelity and soon started an affair on his own. No further Josephine’s affairs have been recorded but Napoleon’s love for Josephine was no longer the same. And when it became clear that Josephine is unable to have children, Napoleon decided to divorce her. He thereafter married Marie-Louise of Austria who gave birth to the long-awaited heir. But despite Josephine’s infidelity, divorce and remarriage, Napoleon’s last words are said to be “France, the Army, the Head of the Army, Josephine.”

Alexander I of Serbia and Draga Mašin 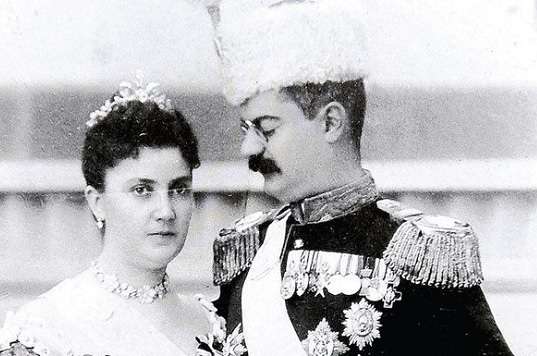 The love between Alexander I of Serbia and Draga Mašin appears to had been stronger than themselves. The relationship between the young King and 12 years older widow and lady-in-waiting to his mother caused an outrage in the country. But nothing could stop Alexander from marrying Draga and making her queen, not even his mother who was banished from the country for opposing the marriage. Eventually, the opposition slightly subsided but the situation worsened rapidly for the royal couple after the false pregnancy scandal. The latter seriously undermined the country’s international reputation and infuriated a group of military officers who began to conspire against the royal couple. And when rumors appeared that one of the Queen’s unpopular brothers will be proclaimed the heir to the throne, the conspirators decided to take action. In 1903, a group of military officers invaded the Royal Palace and assassinated the couple. 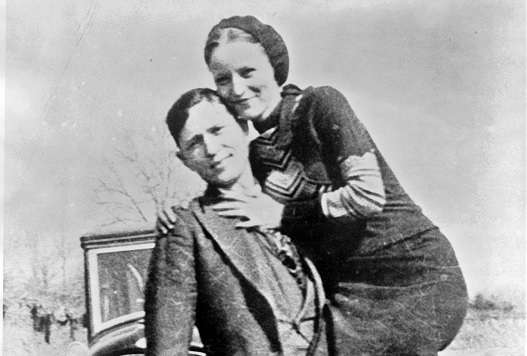 Bonnie and Clyde, lovers and criminals who traveled the Central United States during the Great Depression were not considered as romantic back then as they are today. Their gang was responsible for at least nine police officer and several civilian deaths. It is unsure how the couple met but it is thought that it was love at a first sight. When Bonnie and Clyde met (probably in 1930), the latter already had a criminal record but that obviously did not bother Bonnie. She decided to join him in his criminal undertakings and stayed with him until the very end. They were ambushed by the police in Bienville Parish, Louisiana in 1934 and killed. The couple wanted to be buried together but Bonnie’s family did not allow it.