You are here: History Lists · Events · ﻿List of 10 Major Events of the French Revolution

The French Revolution was a major event in modern European history. The causes of the French Revolution were many: the monarchy's severe debt problems, high taxes, poor harvests, and the influence of new political ideas and the American Revolution, to mention only a few. Starting as a movement for government reforms, the French Revolution rapidly turned radical and violent, leading to the abolition of the monarchy and execution of King Louis XVI. Though the monarchy was eventually restored, the French Revolution changed France and the rest of Europe forever. It inspired a number of revolutionary movements of the nineteenth and early twentieth centuries that made the final end to institutions such as absolutism, feudalism, class privilege and legal inequality, and spread the principles of natural right, equality and freedom throughout the world.

Meeting of the Estates General 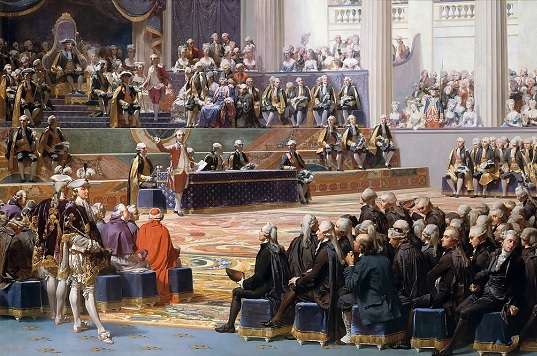 The Estates General were reluctantly summoned by King Louis XVI in May of 1789 with an aim to solve the monarchy’s financial crisis. There were three classes represented by the Estates General: the nobles, clergy and the rest of the population or the so-called Third Estate. Each estate had only one vote. As a result, the nobility and clergy could always overrule the Third Estate. Fearing they would be forced to bear the burden of the financial crisis, the members of the Third Estate decided to form their own National Assembly. After being locked out of the meeting of the Estates General, they moved to an indoor tennis court where they pledged the so-called Tennis Court Oath, vowing to remain there until a new constitution had been written.

Fall of the Bastille 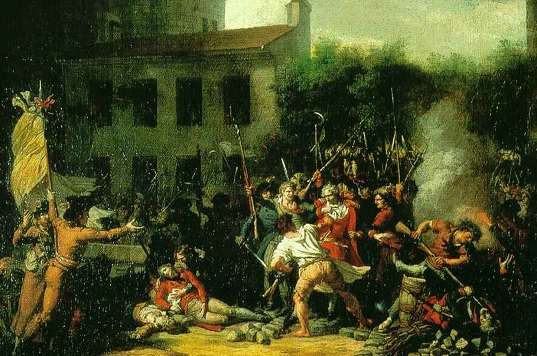 On July 14, 1789, an angry crowd marched on the Bastille, a medieval fortress in east Paris that was mostly housing political prisoners. To many people in France, it was considered as a symbol of the much hated Louis’ regime. Angry, unemployed and hungry Parisians saw it as a place to vent their frustrations. The commander of the Bastille, Marquis de Launay and his troops resisted for a few hours before they surrendered to the mob. After learning about the fall of the Bastille, King Louis XVI withdrew the royal troops from the French capital and recalled finance minister Jacques Necker whom he dismissed just three days earlier. However, he could no longer reverse the Revolution, while the National Assembly (from July 9 formally called the National Constituent Assembly) became de facto the French government. 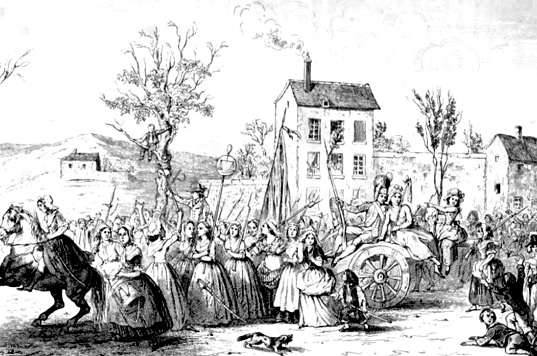 Many people in Paris and the rest of France were hungry, unemployed and restless. In October, a large crowd of protesters, mostly women, marched from Paris to the Palace of Versailles, convinced that the royal family and nobility there lived in luxury, oblivious to the hardships of the French people. They broke into the quarters of Queen Marie Antoinette who as an Austrian was particularly despised. The crowd demanded bread and wanted to bring the King and his family back to Paris to “live among the people”. Louis conceded to their demands and agreed to go to Paris with the mob, believing it would only be a temporary inconvenience. As they left Versailles the crowd chanted that it was “bringing back the baker, the baker’s wife and the little baker’s apprentice!” 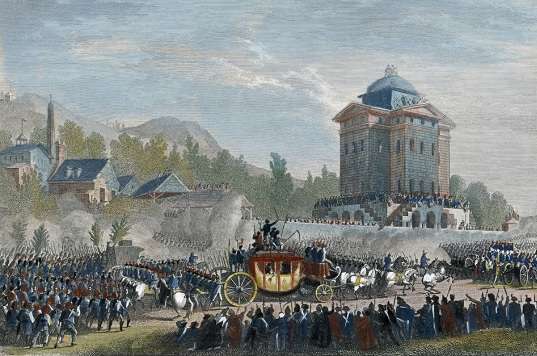 The National Assembly continued working on a new constitution for France. After much debate, members of the Assembly decided to impose limits to the King’s authority. The King would have veto power but the National Assembly could overrule his veto. These restrictions appalled Louis XVI and Marie Antoinette. They also felt like prisoners in their Tuileries Palace in Paris. They decided to leave France and seek refuge in Austria, hoping to eventually be reinstated on the throne as absolute monarchs. Before leaving, Louis wrote a manifesto denouncing the Revolution. On June 20, 1791, the royal family quietly left Paris. They managed to get within a few miles of the border before being recognized in the town of Varennes and forced to go back. The incident was devastating for the National Assembly. The King’s attempt to flee and his denouncement of the Revolution came just as the new constitution was about to be implemented. Now they had to deal with a monarch who was against the constitution and very unpopular with the people.

Dissolution of the National Assembly 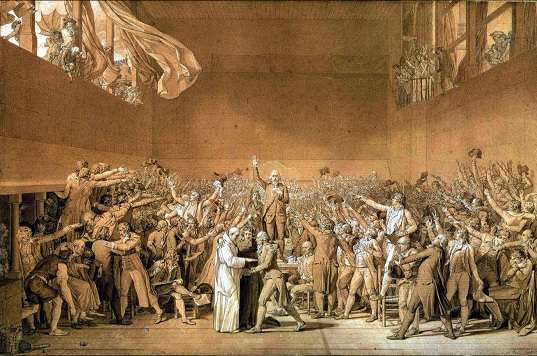 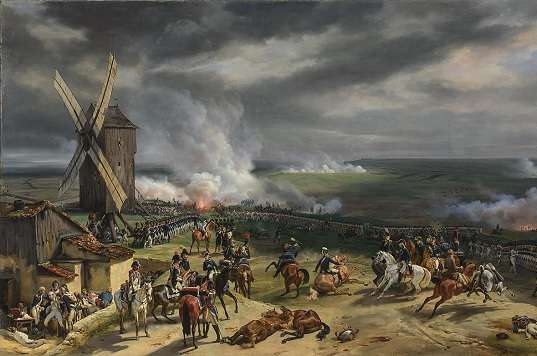 The issue of war dominated the debate in the new Legislative Assembly. Tensions with the rest of Europe continued to rise. Revolutionary France was viewed with both fear and anger by the European monarchies, especially by the neighboring Austrian monarchy. In France, the support for war was growing as well. Louis XVI and hard line monarchists wanted war because they believed that foreign armies would easily overthrow the new government. The revolutionaries, on the other hand, pushed for war because they thought it would unify the nation and spread the ideas of the Revolution to the rest of Europe. On April 20, 1792, France declared war on Austria.

Attack on the Tuileries Palace 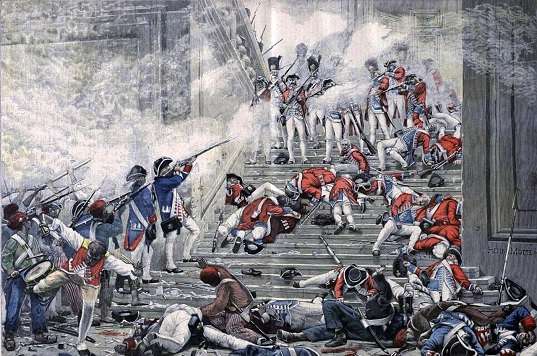 In spring and summer of 1792, the French government found itself in a very difficult situation. The Austrian army and its Prussian allies started advancing into the French territory. Economic stagnation continued throughout the country. The King was widely viewed as a traitor for trying to flee the country. The Legislative Assembly was divided and Paris was getting increasingly radicalized. On August 10, a crowd of about 20,000 people attacked the Tuileries Palace. The King and Queen had escaped the Palace and placed themselves under the protection of the Legislative Assembly. Fearing further violence, the Assembly placed them under arrest. The Revolution was moving into a more radical phase. Over the next month, hundreds of suspected royalists were executed in what became known as the “September Massacre”. Many French men and women fled for their lives.

Declaration of the Republic and the Trial of Louis 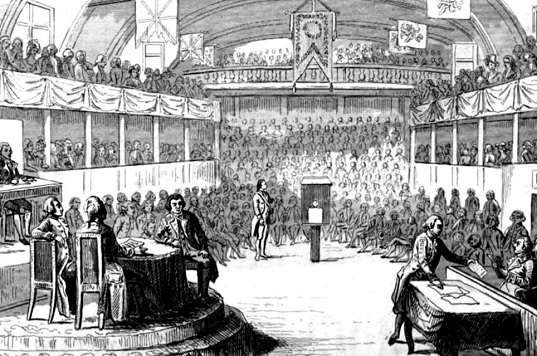 Following the arrests of Louis XVI and Marie Antoinette, the Legislative Assembly disbanded and replaced itself with a new political body named the National Convention. The first act of the latter was to declare France as a republic on September 21, 1792. Meanwhile, the French military had halted the foreign invasion and pushed back the Austrians and Prussians. Louis was charged with treason. The vote at the end of the trial was unanimous: Louis was guilty. The vote on the death penalty was much closer but it passed. On January 21, 1793, Louis was driven through the streets of Paris to a guillotine and decapitated. Marie Antoinette had a short trial next. She was accused of numerous crimes, many of them based on rumors. On October 16, she too was found guilty and guillotined the same day. 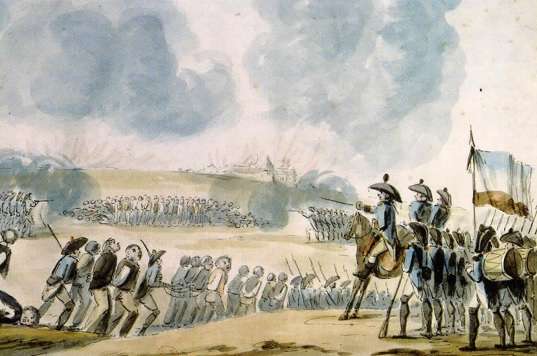 The new National Convention was dominated by the Committee of Public Safety. One man in particular, Maximilien Robespierre came to dominate the Committee and established himself as the leader of the so-called Reign of Terror. Robespierre wanted to rid France of all enemies of the Revolution and to protect the “virtue” of the nation. From September 1793 to July 1794, an estimated 16,000 people were guillotined. Many radicals were executed along with moderates. Most leaders of the French Revolution were now either dead or had fled the republic. Opposition to Robespierre grew both in the Committee of Public Safety and within the National Convention. The execution of popular Committee member George-Jacques Danton and Robespierre proclaiming himself as the leader of a new religion of the Supreme Being caused much resentment. On July 27, 1794, Robespierre was arrested. He was guillotined the following day.

Directory and the Rise of Napoleon 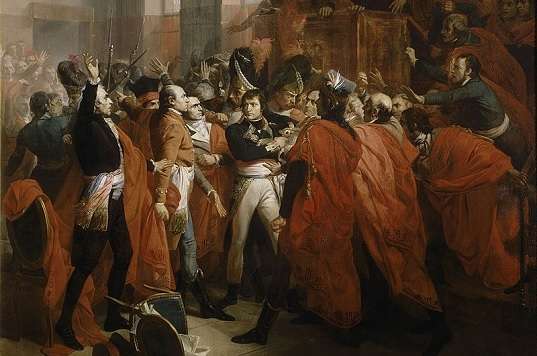 After the dramatic fall of Robespierre, the National Convention created a new constitution for France that was implemented in 1795. Leading the new government was the Directory consisting of an executive council of five members. Almost from the start, the Directory became mired in corruption, political conflict, financial problems and depended on the army to remain in power. In 1799, a successful military commander named Napoleon Bonaparte returned from a military expedition in Egypt and ousted the Directory. Napoleon established what he called the Consulate and himself as the First Consul.