You are here: History Lists · Events · List of 10 Greatest Battles of the Pacific War

The Pacific War, also referred to as the Asia-Pacific War was fought during World War II between the Empire of Japan, Thailand and Japanese puppet states on the one side and the United States, Britain, Australia and other Allied states on the other. The beginning of the Pacific War is traditionally dated to December 8, 1941, when the Japanese launched an attack on Thailand, Malaya, Hong Kong and Pearl Harbor (in Japan, it was already December 8 when the U.S. naval base in Hawaii was attacked). Until the formal surrender of Japan on September 2, 1945, which ended both the Pacific conflict and World War II, a number of battles were fought both on sea and land. Here is a list of 10 greatest battles of the Pacific War: 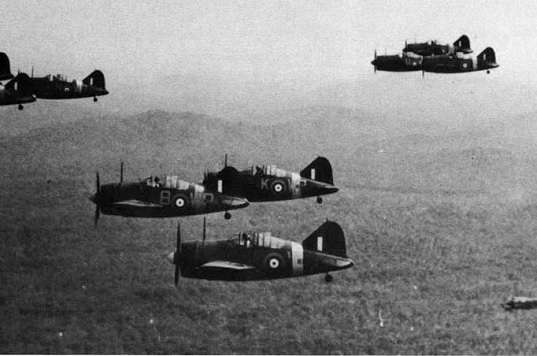 On February 8, 1942, the Japanese launched an attack on British-held Singapore that was defended by some 90,000 Commonwealth troops stationed on the island. Arthur Percival, the commander of the Commonwealth forces expected the attack but he left Singapore’s landward side virtually undefended, convinced that the thick jungle and mangrove swamp on the Malay Peninsula were impassable and that the attack will come from the sea. The Japanese, however, choose to move through the very same jungle and mangrove swamp that supposed to be impenetrable. After just 7 days of fighting, the Commonwealth forces surrendered. Over 60,000 troops including their commander became prisoners of war.

Battle of the Java Sea 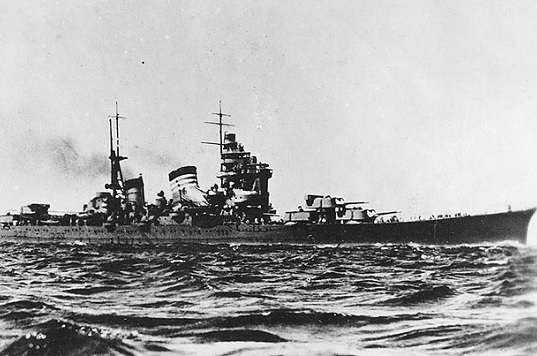 The Battle of the Java Sea was fought between the American-British-Dutch-Australian (ABDA) and Japanese navies on February 27, 1942. On that day, the ABDA forces intercepted the invading Japanese in the Java Sea with an aim to halt their advance in the Dutch East Indies (today’s Indonesia). But by the end of the day, the Japanese humiliated the ABDA forces, sinking 3 destroyers and 2 cruisers, and killing 2,300 men including the ABDA commander Karel Doorman without losing a single ship. The Battle of the Java Sea thus only postponed the Japanese invasion of Java for one day.

Battle of the Coral Sea

Fought from May 4 to 8, 1942, the Battle of the Coral Sea was the first combat between the Japanese and American aircraft carriers in World War II. However, the battle was fought exclusively by aircraft – none of the ships involved in the battle shot at the enemy ship. The Japanese aircraft was more successful in locating enemy carriers and on May 8, the combined U.S. and Australian fleet was forced to withdraw. But the Japanese, worried that there might be more U.S. carriers in the area, canceled the Operation MO the goal of which was to capture Port Moresby (New Guinea) and Tulagi (the Solomon Islands). The strategic victory in the Battle of the Coral Sea thus went to the combined U.S. and Australian forces. 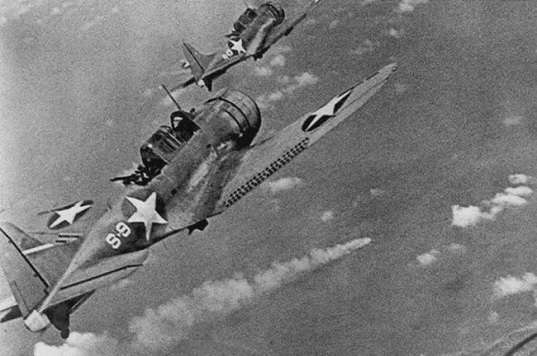 Although the Battle of Midway was one of the first major encounters between the U.S. and Japanese forces in the Pacific, it had a major influence on the future course of the conflict. On June 3, 1942, the Japanese launched an attack on the Aleutian Islands with an aim to divert the attention away from their true target – the Midway Atoll. But the Americans broke the Japanese naval code and knew exactly what the Imperial Combined Fleet was planning. They clashed with the Japanese on June 4 and after three days of fighting, forced the enemy to give up the attempt to invade Midway. But most importantly, the U.S. forces inflicted a serious blow to the Japanese naval and air power. The Imperial forces lost all four carriers that participated in the battle and about 250 aircraft. After the Battle of Midway, the immediate threat to the United States virtually came to an end. 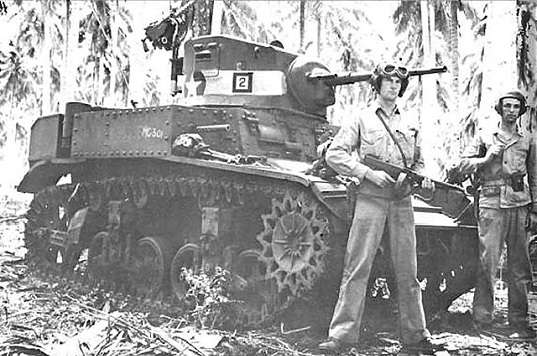 Also referred to as the Guadalcanal Campaign, the Battle of Guadalcanal was actually a series of battles fought both on land and sea for the largest of the Solomon Islands. On August 7, 1942, the Allied forces (consisting mainly of U.S. troops) launched an attack on the island of Guadalcanal with an aim to make an end to the Japanese threat to supply and communication lines between the United States and Australia. The Allies succeeded to capture the island but they needed more than six months to break the Japanese resistance. After losing about 30,000 men, over 600 aircraft and 24 warships, the Japanese decided to evacuate some 10,000 men who survived until February 9, 1943. The Allies suffered heavy losses as well - over 600 aircraft destroyed, 25 warships sunk and about 7,500 men killed in action. But the route between the United States and Australia was from then on secure. 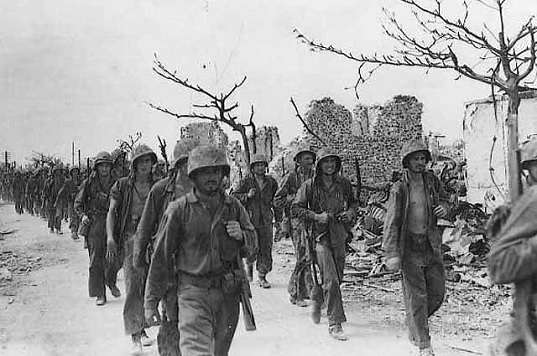 The Battle of Saipan began on June 15, 1944, when the U.S. forces launched an attack on the island of Saipan in the Mariana Islands to gain an air base within a direct striking distance of mainland Japan. However, the Japanese refused to surrender even when it became clear that they are in a lost position. By July 9 when the U.S. troops raised a flag in victory, approximately 30,000 Japanese troops were either killed or committed suicide, including all four commanders. Fewer than 1,000 Japanese were captured as prisoners of war. The Battle of Saipan also claimed thousands of civilian deaths, many of which were suicides. The Americans suffered about 13,500 casualties of which 3,500 were deaths.

Battle of the Philippine Sea 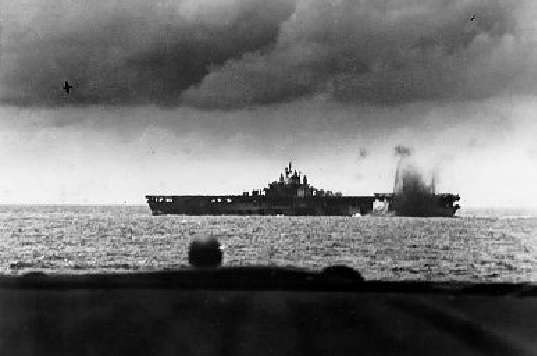 The Battle of the Philippine Sea was fought between the U.S. and Japanese carriers off the coast of Saipan just four days after American landings on the island. On June 19, 1944, the Japanese navy launched an attack with an aim to inflict a decisive defeat to the U.S. fleet. But by the late afternoon of June 20, the Japanese were retreating, sustaining a decisive defeat themselves: 3 carriers sunk and about 400 aircraft destroyed. The Imperial fleet was seriously weakened, while the Japanese air force was “beyond repair”. 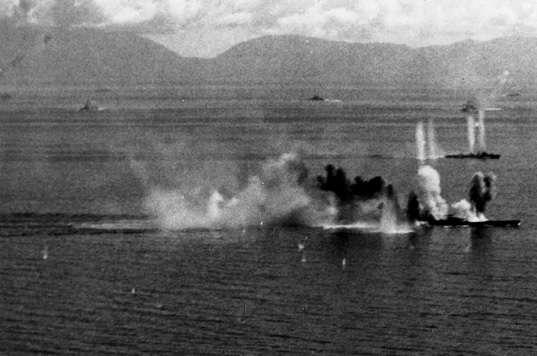 The Battle of Leyte Gulf, sometimes also referred to as the Second Battle of the Philippine Sea was the largest naval battle in World War II and according to some historians, the largest naval battle in history. The battle which involved over 270 warships (64 Japanese, 216 American and 2 Australian) was fought off the Philippine islands of Leyte, Luzon and Samar from October 23 to 26, 1944, and ended as a disaster for Japan as the Imperial fleet was virtually destroyed. The Japanese lost all 4 carriers, 11 destroyers, 10 cruisers and 3 battleships, and 12,000 men. The Allies lost 3 destroyers, 2 escort carriers and 1 light carrier, and suffered about 2,500 human casualties. 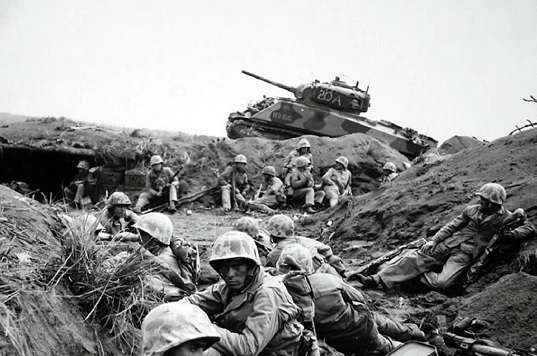 The Battle of Iwo Jima is one of the most famous battles of the Pacific War not only for the iconic flag raising photo by Joe Rosenthal but also because it in many ways symbolized the Pacific conflict. It was fought from February 19 to March 26, 1945, over a tiny island measuring just 5 x 2.5 miles. Like in many other battles in the Pacific theater, the U.S. Armed Forces had a superiority in both men and arms but the Japanese fiercely defended their positions virtually until the last man. Of about 22,000 Japanese defenders, 21,000 were killed. The American victory had a high cost as well - about 20,000 wounded and 6,800 killed. 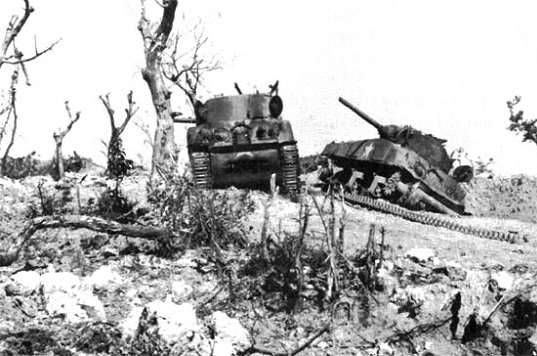 One of the bloodiest battles of the Pacific War was fought from April 1 to June 22, 1945, for the island of Okinawa. The Americans wanted the island at the southern tip of Japan to create a base for air raids on Japan as well as to “rehearse” for the planned invasion of Japan’s main islands. However, they met a fierce resistance. By June 22, the U.S. troops suffered nearly 50,000 casualties of which approximately one quarter were deaths. The Japanese, on the other hand, lost about 100,000 of 110,000 men. The largest amphibious campaign of the Pacific War also claimed heavy civilian casualties as an estimated 100,000 civilians were killed by the end of the campaign. According to many historians, the Battle of Okinawa had a major influence on the US decision to drop atomic bombs on Hiroshima and Nagasaki as it clearly revealed that the invasion of Japan would claim huge casualties on both sides.