Paradiso (English: "Heaven", "Paradise") is the third and the last section of Dante's epic poem of Divine Comedy. In it, the Italian poet describes his journey through Heaven, the things he sees and people he encounters on the way to the so-called Empyrean, the true home of God, saints, angels and the souls of the faithful. He is accompanied by Beatrice, identified as Dante's love of life Beatrice Portinari (1266-1290) who guides him through the 9 Spheres of Heaven. 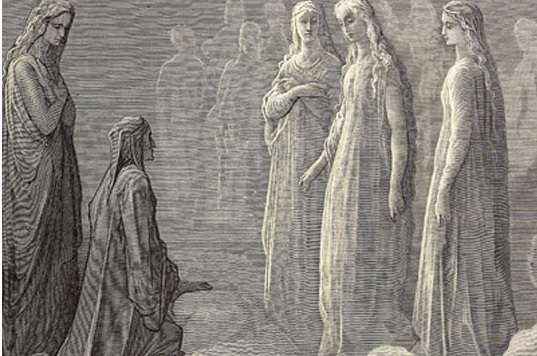 When entering the “Realm of Heaven”, Dante and Beatrice enter the First Sphere of Heaven or the Moon. Here, they see the souls of those who failed to keep their vows including the sister of Dante’s friend Forese Donati, Piccarda Donati and Queen Constance of Sicily, both of whom were forced from their convents. Beatrice explains to Dante why their souls were “punished” by being allocated to the lowest Heaven for something that wasn’t their fault, adding that all souls actually live in the Empyrean. She also explains to him the reasons for the dark marks on the Moon. 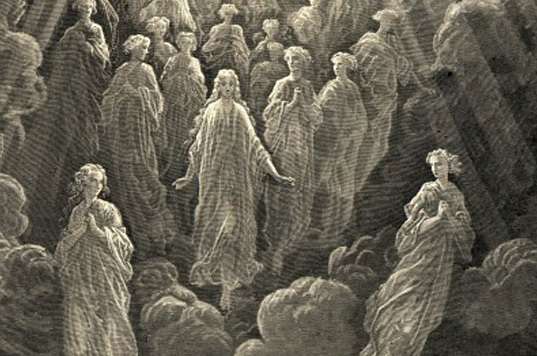 In the Second Sphere of Heaven or Mercury, Dante and his guide Beatrice meet the souls of those who were just and righteous during their earthly lives but were primarily driven by ambition. The poet speaks to the Byzantine Emperor Justinian who tells him the history of the Roman Empire, speaking, among other things, about Julius Caesar, Augustus, Jesus’ crucifixion and the destruction of Jerusalem. Before moving forward, Dante and Beatrice discuss the original sin and redemption as well as the controversial idea of the responsibility of the Jews for Jesus’ death. 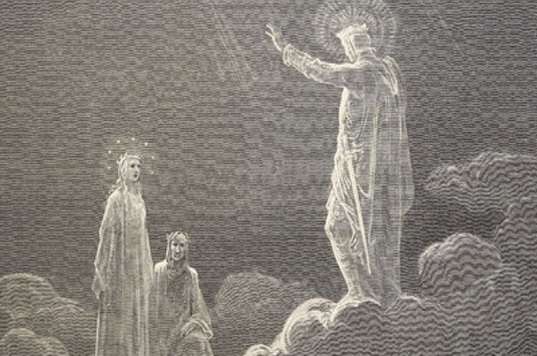 The Third Sphere of Heaven or Venus is home to the souls of lovers who “earned” their place in heaven with their love for God and humanity. Here, Dante meets the young prince Charles Martel of Anjou who speaks about the influence of factors other than heredity on an individual’s character and qualities. The Italian poet also meets the soul of Cunizza da Romano whose brother he encountered in the Seventh Circle of Hell, and troubadour Folquet de Marselha who later became the Bishop of Toulouse. 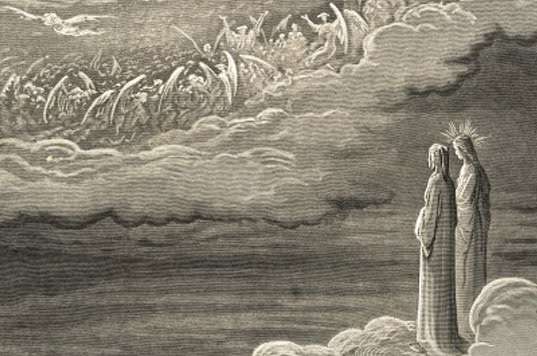 When reaching the Fourth Sphere of Heaven or the Sun, Dante and Beatrice are surrounded by a crown consisting of St. Thomas Aquinas and eleven other souls of wise men who also include Boethius, King Solomon, Peter Lombard and the Venerable Bede, to mention some of the most famous ones. Then a second crown of twelve wise men appears with St. Bonaventure as their main spokesman. Similarly as St. Thomas who tells Dante the story of life and work of St. Francis, St. Bonaventure presents the story of St. Dominic. 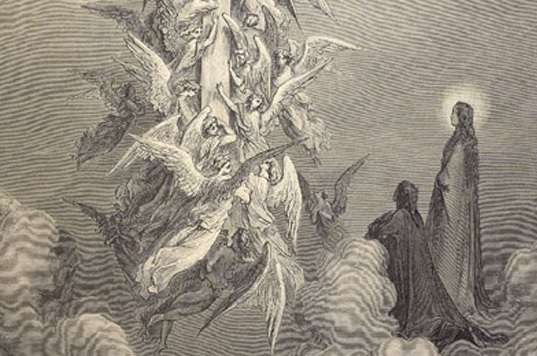 The Fifth Sphere of Heaven or Mars is home to holy warriors, whose souls are forming the shape of a cross. Here, Dante is approached by the soul of his great-great-grandfather Cacciaguida who was killed during the Second Crusade. He speaks about Florence’s glorious (and very idealized) past and criticizes its later decline. Also, he (correctly) predicts Dante’s exile from the city-state. Holy warriors who appear in this sphere of Dante’s Paradiso also include Joshua, Roland, Charlemagne, Judas Maccabeus, Robert Guiscard and others. 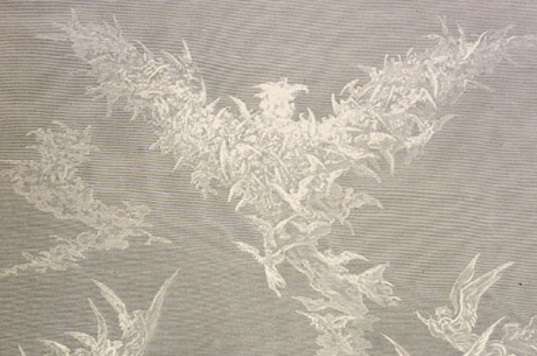 The Sixth Sphere of Heaven or Jupiter is “inhabited” by the souls of just rulers. They spell out the Latin phrase “diligite iustitiam qui iudicatis terram” (English: “cherish justice, you who judge the earth”) and then form a giant eagle that speaks to Dante about divine justice and inscrutability. Rulers who are identified to form the eagle include the Biblical kings David and Hezekiah, Constantine, Trajan, William II of Sicily and Ripheus, a Trojan hero and pagan who was saved by God for his righteousness. 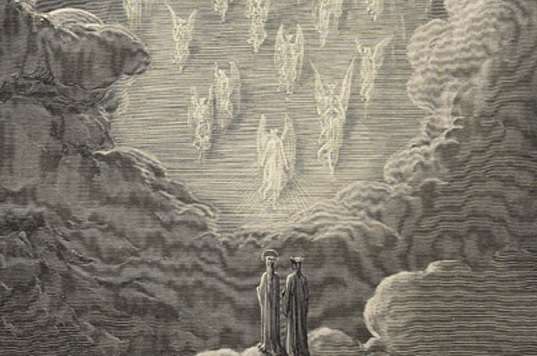 In the Seventh Sphere of Heaven or Saturn, Dante encounters the spirits of people who dedicated their lives to prayer, climbing up and down a golden ladder. In this sphere, the poet speaks to St. Peter Damian who points out to the corruption of the Church but he also meets St. Benedict who is infuriated with the Church’s moral decline as well. St. Benedictine also tells Dante that the golden ladder is reaching up to the very Empyrean and explains the latter’s nature. 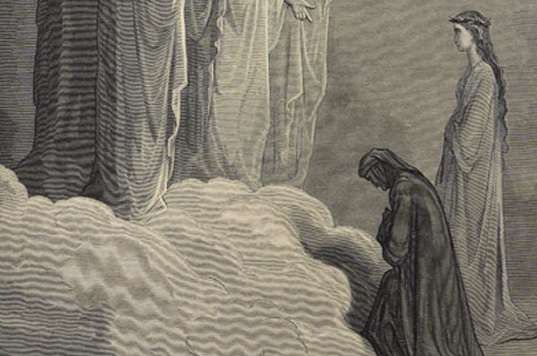 Dante and Beatrice enter the Eighth Sphere of Heaven or Fixed Stars in the constellation of Gemini. Here, the poet and his guide see the Virgin Mary and other Biblical saints including the apostles of Peter, John and James who test Dante on faith, love and hope. Then Dante sees Adam who tells him how old he is, how long he lived in Eden, why God got angry at him and what was his original language. Before moving forward, Dante and Beatrice also witness Peter’s anger with the papacy and in particular, Pope Boniface VIII. 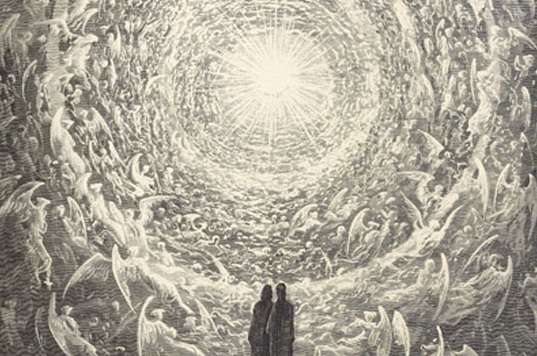 The last of the 9 Spheres of Heaven or the Primum Mobile is also the last stop before the Empyrean and the last of the physical Heavens as the Empyrean is beyond space and time. After a brief discussion with Beatrice on the place they’ve come to, Dante sees an intensely bright light surrounded by nine circles which, as he soon learns, are the nine orders of angels surrounding God in the center. As they are slowly ascending to the Empyrean, Beatrice tells Dante the story of creation and history of the angels.