Purgatorio ("Purgatory" in English) is the second section of the Divine Comedy, which is an epic poem written by the great Italian poet, Dante. It follows after Inferno and tells the story of his climb up Mount Purgatory, accompanied by another Italian poet by the name of Virgil, who serves as his guide. The climb is supposed to teach him lessons about Christian life and God's love and purify him of his sins before continuing on his journey to God. 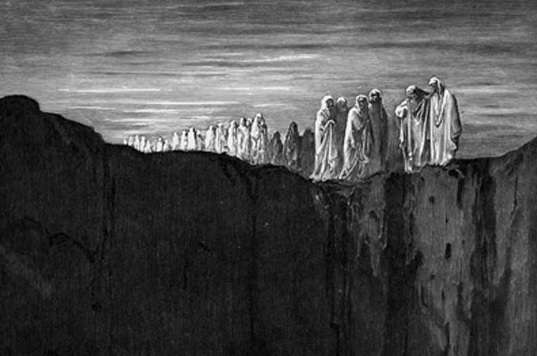 This stage is at the very base of the mountain and is part of what is known as Ante-Purgatory. In it, the two poets encounter the souls of those who delayed their Christian life because of their stubbornness to obey God’s laws. They are to remain in here for a time period that is thirty times longer than the period which they exhibited stubbornness. They run into Manfred of Sicily who tells them that a soul’s time in Purgatory can be reduced with prayers from Christians who are in good standing with God in the world of the living. 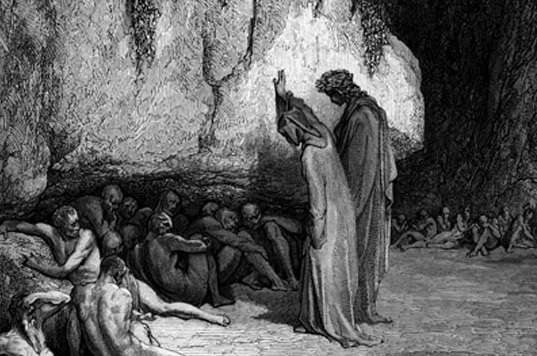 This is the last part of Ante-Purgatory. In this terrace, they encounter deceased kings who were negligible during their rule, people who never repented while alive, and people who suffered violent deaths but managed to repent at the last minute. That following evening, Dante falls asleep and wakes up at the gates of Purgatory Proper, after having a dream that an eagle carried him during the night. The gates are guarded by an angel, and he carves Dante’s forehead with the letter “P” seven times. The angel informs Dante that he is about to go through the seven terraces of Purgatory (each representing a sin among the seven deadly ones) and one of the P’s will be erased as he progresses through each terrace as he climbs Mount Purgatory. He then opens the gates. 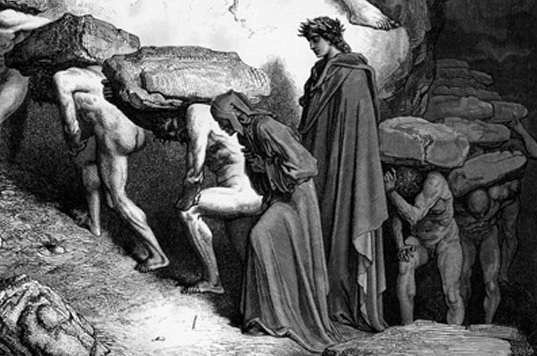 This terrace that the poets enter first is full of those that were prideful during their earthly lives. The walls of the terrace have sculptures with examples of humility, which is the opposite of pride. The prideful never get a chance to see these sculptures, since their backs are arched due to the huge weights they must carry using their backs as their sins get purged. Dante bends over to converse with the souls and learns lessons from them. When Dante reaches the exit of the terrace, an angel removes the first “P” from his forehead, and the poets move on to the 2nd terrace. 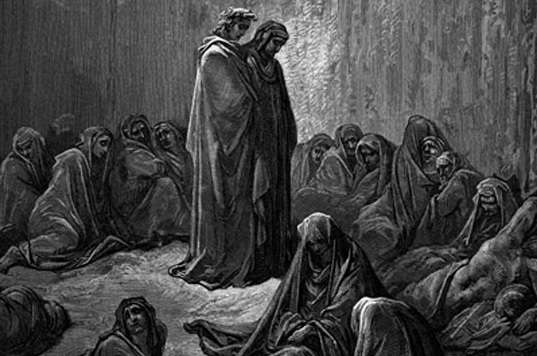 This terrace is filled with the souls of envious penitents. Their earthly lives were spent desiring what made other people happy to the point they would even harm them in order to deprive them of this. Soon as they enter the terrace, they hear voices that speak examples of generosity, which is the opposite of envy, and later on, they also hear the voices speak examples of envy. The penitents wear gray cloaks and cannot see where they are going because their eyes have been closed and sewn with iron wire. As they leave the terrace, the second “P” is removed. 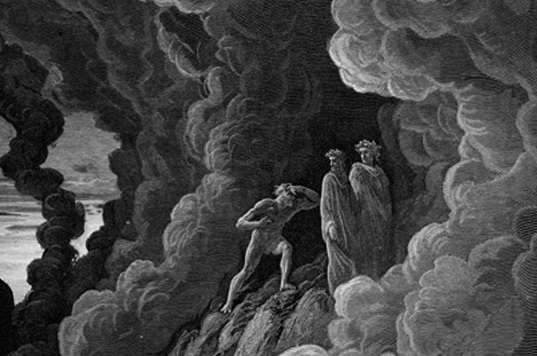 Next, the poets enter the third terrace, which is filled with souls of wrathful penitents. Dante begins to have visions of gentleness, which is an example of the opposite virtue of wrath. The wrathful forever wonder in a cloud of black smoke, which is a manifestation of the anger that clouded their mind and blinded them when they were alive. The souls in this part of the poem do not shout out any examples, but Dante does have a conversation with Marco Lombardo about free will. Dante also has visions about punished wrath. When they meet an angel, another “P” is removed and Dante and Virgil exit the terrace. 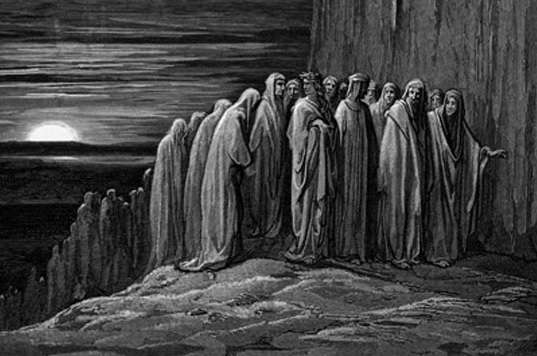 The next terrace contains the souls of those who were slothful in their earthly lives. Virgil explains Purgatory’s structure to Dante and how it is determined by love. The wrathful are forever preoccupied with running around the terrace without rest, since they never had zeal (the opposite of sloth) in their earthly lives, especially when it came to acting out of love. All example given in this terrace from the voices is the air are of zeal. Later that evening, when Dante falls asleep, he is haunted by nightmares of a siren, a manifestation of gluttony, lust, and greed. On the next day, the fourth “P” is removed and the poets leave the terrace. 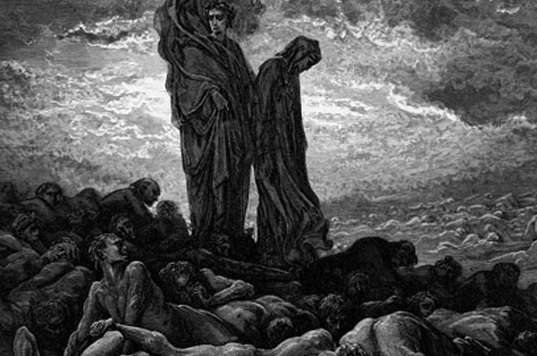 Dante and Vergil enter the terrace of the Avaricious and Prodigal. Their punishment is to lie on the floor, face down, with their hands and feet bound together. The souls are being punished and purged for desiring material goods with extravagance, greed, or ambition. As the poets travel through the terrace, it is shaken by a mysterious tremor, but Dante does not ask Virgil about it, even though he is curious. They run into the Roman, Statius, and he explains the mysterious tremor to Dante: it happens when a soul is ready to move on from purgatory, and he, Statius, was the soul that caused the tremor. He joins them on their journey. It also turns out that Statius is an admirer of Virgil’s work. The next angel they run into removes the fifth “P” from Dante’s forehead. 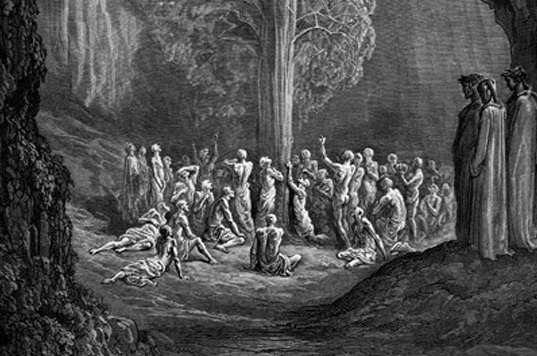 The next terrace contains the souls of the gluttonous, and the poets witness their painful punishment: they experience excruciating hunger and thirst while there are plenty of trees with fruit around them. The souls experience this because they can never reach the trees. The voices in the trees give examples of temperance, which is the opposite of gluttony. Dante runs into his friend Forese Donati and his predecessor Bonagiunta Orbicciani (who turns out to be poetic and has nothing but kind words for one of Dante’s poems, “La Vita Nuova”). As the three poets exit the sixth terrace, an Angel removes the sixth “P”. 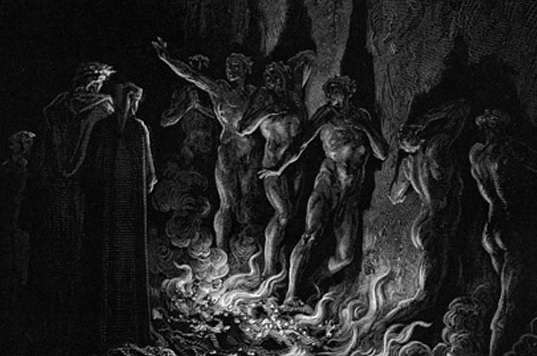 As they continue to climb Mount Purgatory, Dante contemplates how the penitents in the terrace of the Gluttonous can be so thin but yet be souls. Statius takes this opportunity, and Virgil gives him the go-ahead, to explain how the body and soul are related. In the terrace of the lustful, the penitent souls must run through a great wall of flames. As they run through it, they call out examples of chastity, which is the opposite of lust. Everyone must run through the wall before they leave, including Dante. Dante is hesitant because he is afraid. Virgil tells him that Beatrice, the love of his life, is waiting for him in the Earthly Paradise. This is enough to convince Dante, who goes through the flames. They all fall asleep shortly after that and in the morning, they all proceed to the Earthly Paradise and the final “P” on Dante’s forehead is removed.