The celebrated American architect Frank Lloyd Wright (1867-1959) designed and built hundreds of houses that had a major influence on the 20th century residential architecture in the United States. Today widely admired for the outstanding harmony of human habitation and the environment, however, not all Wright's houses were positively received by his contemporaries as his designs were well ahead of his time. Nevertheless, the architect received much recognition while alive both in the United States and abroad even though the magnitude of his work was truly realized only after his death. The vast majority of his buildings including residential ones have been inscribed to the U.S. National Register of Historic Places or declared National Historic Landmarks, or both, while 10 works have also been proposed for the inscription to the UNESCO World Heritage Sites list. Listed below are only 20 of many outstanding Frank Lloyd Wright houses. 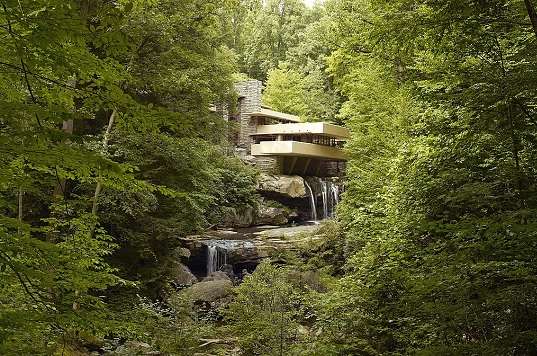 Also known as the Kaufmann Residence, the Fallingwater is by many regarded as the most beautiful of all Frank Lloyd Wright houses. And it isn’t hard to understand why. The spectacular house was built between 1936 and 1938 over a small waterfall in Fayette County, Pennsylvania. It served as a summer retreat of Edgar J. Kaufmann and his family until 1963 when it was bestowed to the Western Pennsylvania Conservancy which shortly thereafter opened it to the public. 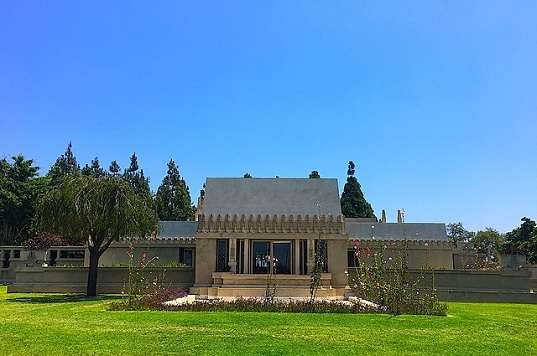 Also known as the Aline Barnsdall Hollyhock House, this Wright’s home was designed for the American oil heiress Aline Barnsdall in Hollywood, Los Angeles. Constructed between 1919 and 1921, the Hollyhock House was conceived as a part of a larger project but the planned arts and theater complex was never completed. In 1927, Barnsdall donated her home and property to the city of Los Angeles to be used as a public art park. In 1997, the Mayan Revival style house was designated as a National Historic Landmark. It was later also added to the Frank Lloyd Wright Buildings that have been nominated for the inclusion to the World Heritage Sites list. 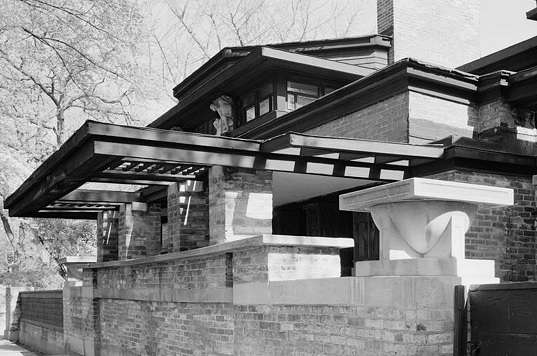 The Frank Lloyd Wright Home and Studio, located at Chicago Avenue in Oak Park, Illinois, was the famous architect’s residence and studio. He lived and worked here for two decades (from 1889 until 1909) during which he designed over 150 buildings, largely residential ones. In 2012, the architect’s former home and studio was acquired by the Frank Lloyd Wright Preservation Trust, a non-for-profit organization dedicated to preservation of the architect’s masterpieces and presenting his legacy to the public. 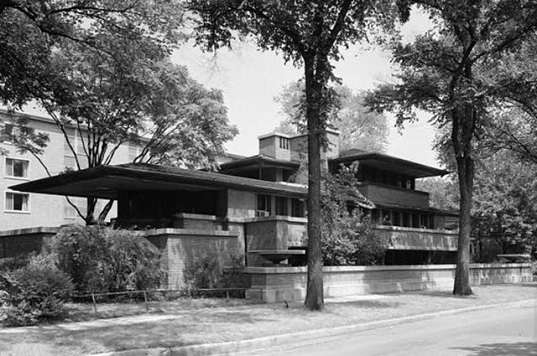 Listed in the U.S. National Register of Historic Places, designated as a National Historic Landmark and added to the Frank Lloyd Wright Buildings that are nominated for inclusion to the UNESCO World Heritage Sites list, the Robie House is considered to be the finest Wright’s Prairie style house. Located in Hyde Park, Chicago, the house was built between 1908 and 1910 for the Robie family who, however, didn’t enjoy their new home for long. The house changed its owners several times before it was in 1997 acquired by the Frank Lloyd Wright Preservation Trust that had it restored and opened to the public. 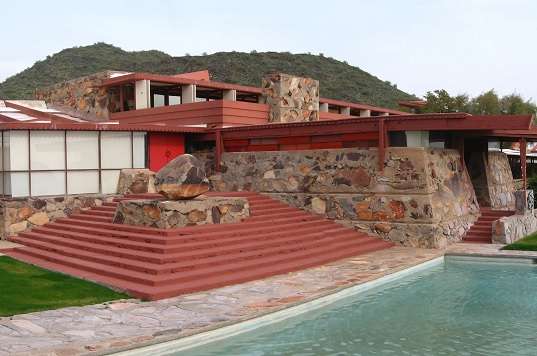 Wright built the Taliesin West in 1937 as his winter residence, studio and architectural school but the original building continued to be changed and expanded with new structures, many of which were designed by the architect’s students. Today, the Wright’s winter residence in Scottsdale, Arizona, is home to the Frank Lloyd Wright Foundation and the campus of the Frank Lloyd Wright School of Architecture but it is also open to public viewing. 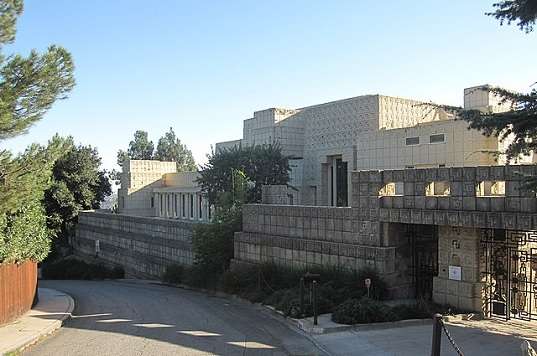 Built for Charles and Mabel Ennis in 1924, the Ennis House is the last of four Wright’s textile block houses. The house reveals a strong influence of the ancient Mayan architecture and is often cited as one of the finest examples of the Mayan Revival style that was popular in the 1920s and 1930s. Since 2011, the Ennis House has been owned by the American businessman Ron Burkle. But before the ownership was transferred from the Ennis House Foundation, Burkle agreed to open his new home in Los Angeles for public viewing 12 days a year. 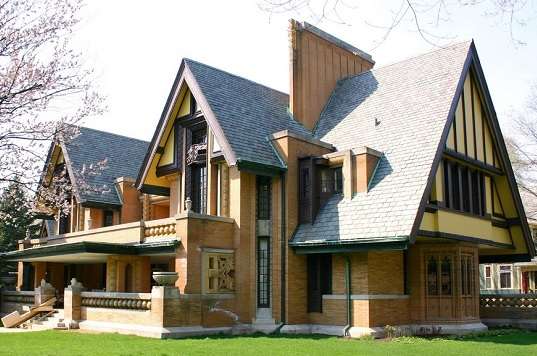 The Nathan G. Moore House or the Moore-Dugal Residence was built twice by the famous architect. In 1895, Wright built the house in Tudor Revival style as asked by its owner Nathan G. Moore. After it had been damaged by a fire almost three decades later, he was asked to rebuilt it. While incorporating elements of the Tudor style, this time the architect also added his own distinct touch. The house not far from the Frank Lloyd Wright Home and Studio in Oak Park, Illinois, is currently home to the Dugal family. 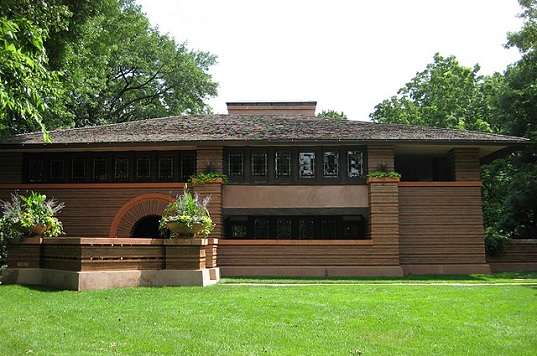 The Arthur Heurtley House, located in Oak Park, Illinois, is one of the first Wright’s Prairie houses. Built in 1902 for the Heurtley family, the house changed several owners who kept on altering it. In the late 1990s, its current owners Ed and Diana Baehren had it restored to its original appearance. In 2000, when the $1.2 million restoration works were nearing the end, the house was inscribed to the U.S. National Register of Historic Places and designated as a National Historic Landmark. 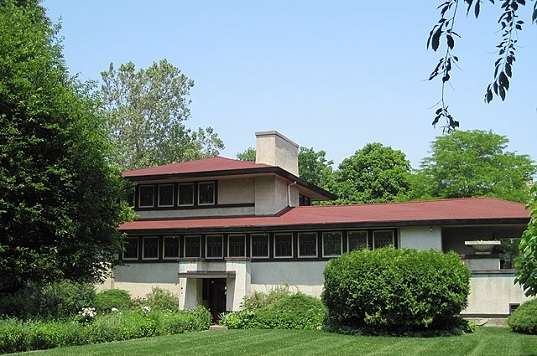 The F. F. Tomek House, also referred to as the Ship House is an early example of Frank Lloyd Wright Prairie houses. Built for Ferdinand Frederick and Emily Tomek in 1906 (designed in 1904), the house in Riverside, Illinois, changed several owners (the Tomeks sold it in 1924) but it remained beautifully preserved thanks to an extensive restoration in the 1970s. In 1999, it was designated as the U.S. National Historic Landmark. 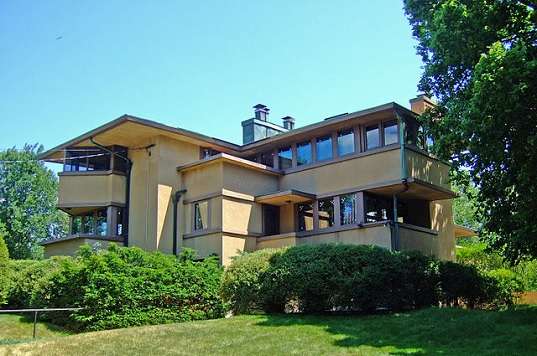 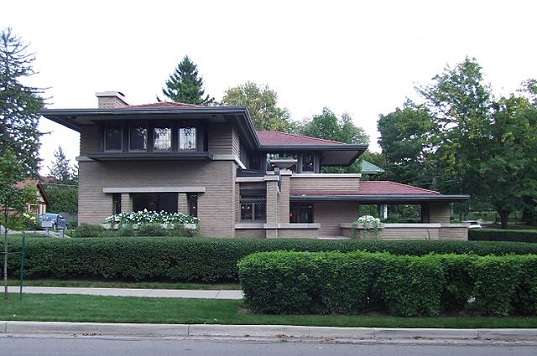 Built for Meyer S. May in 1908-09, the Meyer May House is another Wright’s Prairie School masterpiece. The house which is located in the Heritage Hill Historic District in Grand Rapids, Michigan, was in the mid-1980s bought by the Steelcase company that had it restored to its 1909 appearance and opened to the public. In 1986, it was added to the Michigan State Register of Historic Sites. As a part of the Heritage Hill Historic District, the Meyer May House is also inscribed in the U.S. National Register of Historic Places. 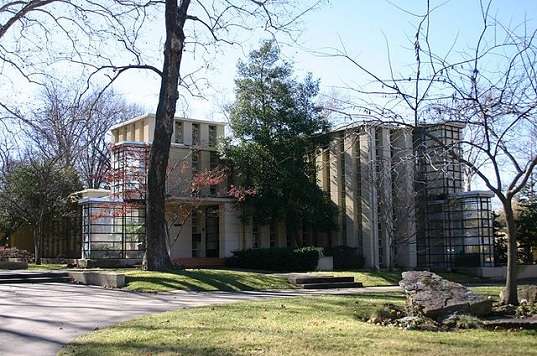 Westhope or the Richard Lloyd Jones House was designed by the famous architect for his cousin Richard Lloyd Jones. Built in 1929, the 10,000 square feet Prairie style house is since 1975 listed in the U.S. National Register of Historic Places. It is located at South Birmingham Avenue in Tulsa and is one of only three Frank Lloyd Wright houses ever built in Oklahoma. 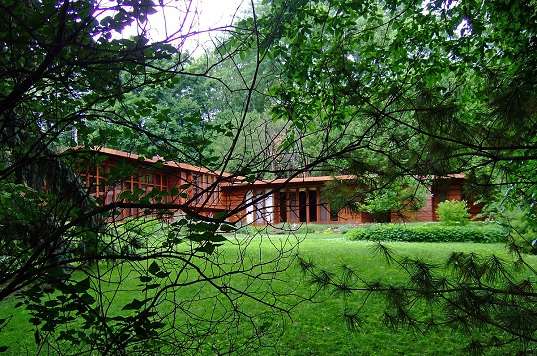 Also known as Jacobs I, the Herbert and Katherine Jacobs First House was designed by Wright for Madison journalist Herbert Jacobs and his wife Katherine. Built in 1937 in Madison, Wisconsin, the house is often cited as Wright’s first of about 60 Usonian houses he designed for middle-income families. Added to the U.S. National Register of Historic Places in 1974 and designated as a National Historic Landmark in 2003, Jacobs I is currently available for monthly rents but it is also open for tours. 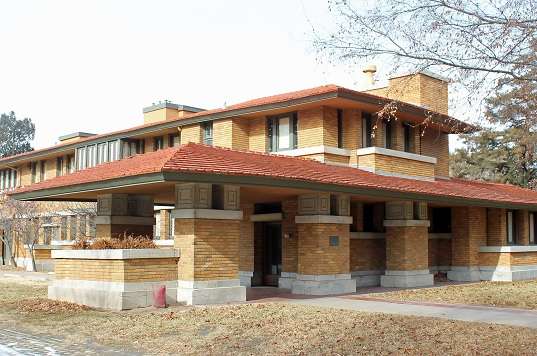 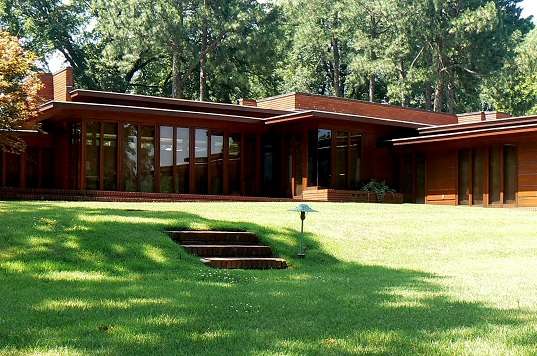 The Rosenbaum House is one of the first Wright’s Usonian style homes and according to many, one of the finest examples of the architect’s vision of the middle-income family houses. It was built in 1940 for Stanley Rosenbaum and his wife Mildred, and remained in possession of the Rosenbaum family until 1999 when Mildred went to a nursing home. In the same year, the only Wright’s house in Alabama was bought from the Rosenbaums by the City of Florence that had it restored and opened to the public as a museum. 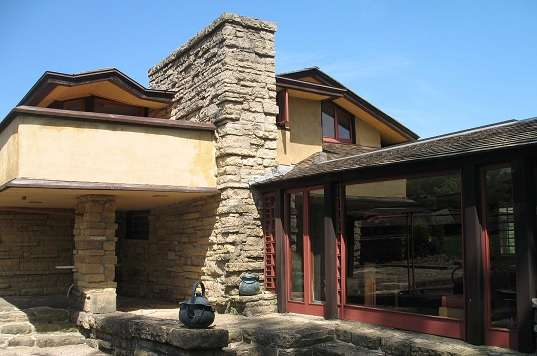 Also known as Taliesin East, Taliesin is the architect’s former home and studio in Spring Green, Wisconsin. It was built in Prairie style in 1911 but the current structure is a third version as both the first and second version were damaged heavily by two major fires. Just like Taliesin West, Taliesin was after Wright’s death conferred to the Frank Lloyd Wright Foundation that was founded by the architect and his third wife Olgivanna in 1940. In 1976, the Wright’s home in Spring Green was added to the U.S. National Register of Historic Places and designated as a National Historic Landmark District. Taliesin is currently also being considered for the inclusion to the UNESCO World Heritage Sites as a part of the Frank Lloyd Wright Buildings. 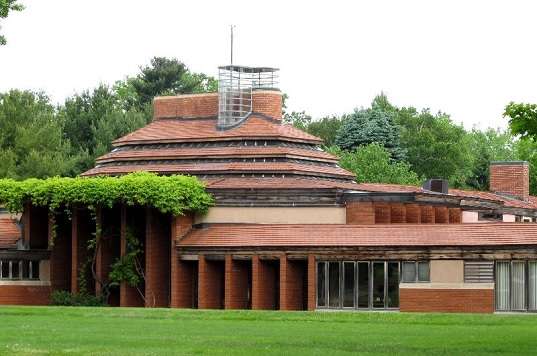 Wingspread or the Herbert F. Johnson House was designed for Herbert F. Johnson, Jr. and completed in 1939. Widely considered to be one of Wright’s most beautiful houses, Wingspread was used by the Johnsons as a residence until 1959 when the family donated their home to The Johnson Foundation. Ever since, the property in Wind Point village in Wisconsin has been used as a conference facility. Like many other Wright’s buildings, Wingspread was also inscribed to the U.S. National Register of Historic Places and declared a National Historic Landmark. 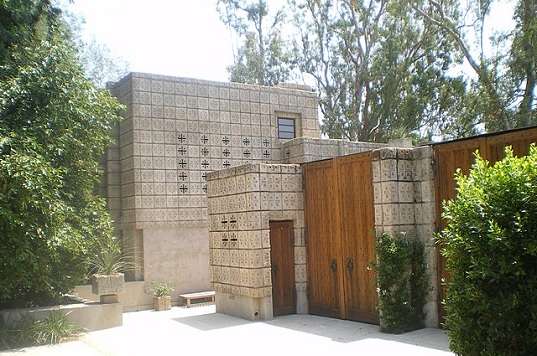 Also referred to as La Miniatura, the Millard House is the so-called textile block house, the first of only four designed by the architect in 1923-24. It was built for rare book dealer Alice Millard for whom Wright had already designed a home in Illinois in the early 1900s. Even though the Millard House is today one of Wright’s most famous and most admired houses, it initially wasn’t well received by the critics. Located in Pasadena, California, the house is still used as a private residence. In 2011, it was offered for sale at nearly $4 million. 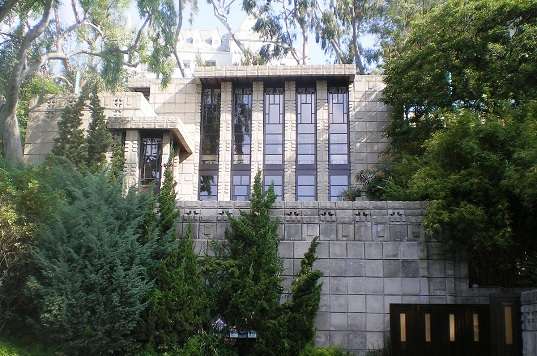 The Storer House is a Mayan Revival textile block house which was built in 1923 in Hollywood Hills, Los Angeles, for Dr. John Storer. Just like the first Wright’s textile block house – La Miniatura, the Storer House came to be regarded as one of the architect’s finest works only in the second half of the 20th century. In the 1980s, it was bought by the American film producer Joel Silver who had it restored with the aid of Eric Lloyd Wright (the architect’s grandson). Silver sold the house in 2002 for a little less than $3 million. In 2013, it was put on the market again at the asking price of just below $7 million. 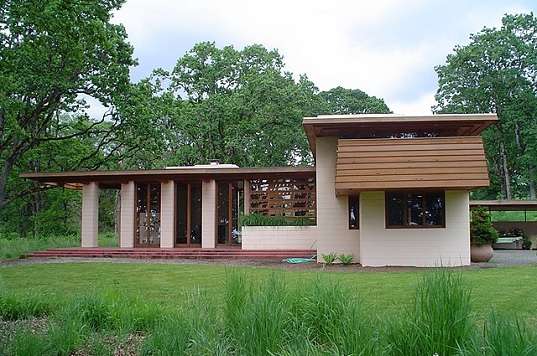 The Gordon House is among the last Usonian style houses designed by the celebrated architect for the middle class families. It was designed for Conrad Gordon and his wife Evelyn in 1957 but it was completed only in 1963, four years after its designer’s death. In 2001, it was moved to its current location in Oregon Garden in Silverton by the Frank Lloyd Wright Conservancy in order to save it from destruction as its owners decided to demolish it. In 2002, reassembled and restored Wright’s masterpiece was opened to the public. Two years later, it was added to the U.S. National Register of Historic Places.