Byzantine architecture refers to the architectural style that flourished between the 4th and 15h century on Byzantine-held territories although its influence reached far beyond the Empire's borders. Unfortunately, many of the most spectacular buildings and monuments have been demolished or fell into ruins, while the majority of those that survived the downfall of the Byzantine Empire went through innumerous alterations and modifications. But there are a few that stand as lasting reminders of the former splendor and glory of the Byzantine Empire and its unique architectural style. 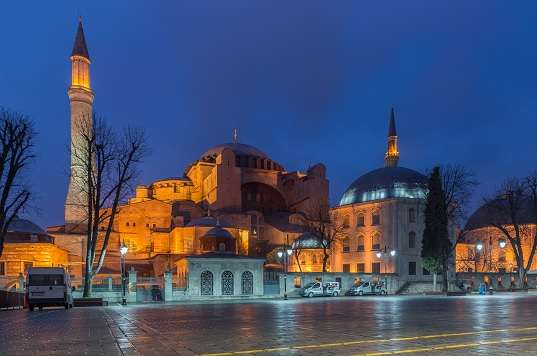 Hagia Sophia, the most famous and most spectacular example of Byzantine architecture, was built between 532 and 537 to replace an early 5th century church that was destroyed by a fire during the Nika riots in 523. When completed, it was the largest and most imposing church in the world, holding the prestigious title until the Ottoman conquest of the Byzantine capital. After the fall of Constantinople in 1453, the basilica was converted into a mosque and was used for religious services until 1931 when it was closed. Since its reopening in 1935, Hagia Sophia has been open to visitors as a museum. 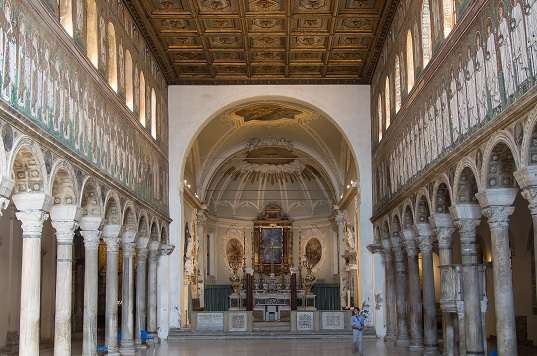 The Basilica of Sant’ Apollinare Nuovo in Ravenna, Italy, was built as an Arian church by Theodoric the Great, King of Ostrogoths (475-526) in the early 6th century. When Italy was conquered by the Byzantines during the Gothic War of 535-554, Justinian I had it converted into an Orthodox church and dedicated it to Saint Martin of Tours. The basilica was named Sant’ Apollinare Nuovo in the mid-9th century when it became home to the relics of Saint Apollinaris. Also home to splendid early Byzantine mosaics, in 1996 the basilica was inscribed on the UNESCO World Heritage Sites list as a part of the site of “Early Christian Monuments of Ravenna”. 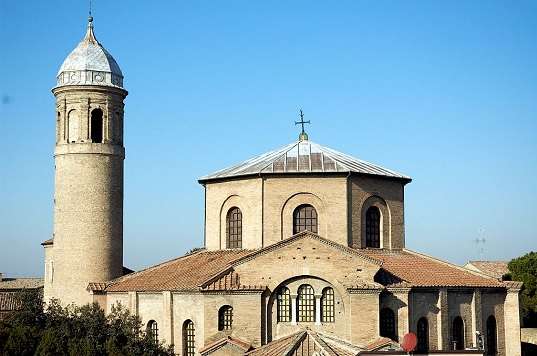 The Basilica of San Vitale is also a part of the UNESCO World Heritage Site of the “Early Christian Monuments of Ravenna”. It too was built by the Ostrogoths (but completed by the Byzantines) and just like the Basilica of Sant’ Apollinare Nuovo, it is decorated with spectacular mosaics which are widely considered as the finest and most beautifully preserved example of Byzantine mosaic art outside Constantinople. Built on what is believed to be the site of martyrdom of Saint Vitalis (also known as Vitalis of Milan), the basilica was consecrated in 547. 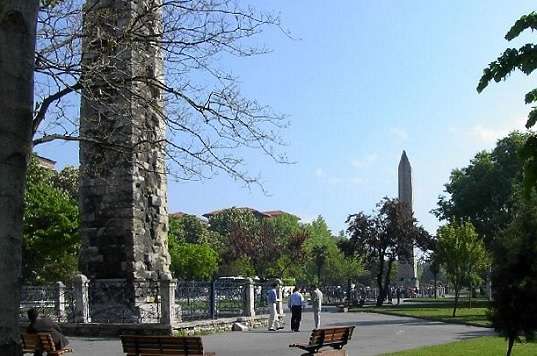 Originally a host to chariot races and related activities including betting, the Hippodrome of Constantinople was also the site of a series of political upheavals and social unrest, some of which escalated into widespread riots and violence. Unfortunately, much of the once richly decorated hippodrome is long gone but many statues, obelisks and other features that used to adorn it have been quite well preserved: the Serpent Column, Walled Obelisk, Obelisk of Thutmose III and Porphyrios statues, to mention only a few. 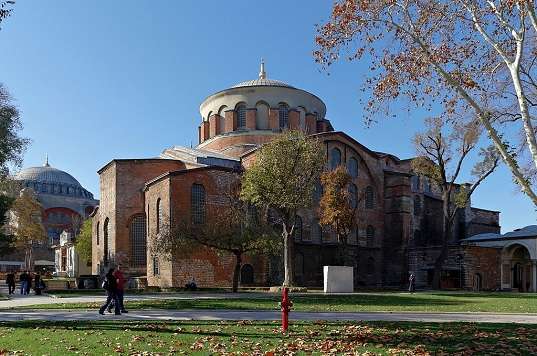 Hagia Irene or Hagia Eirene is one of the earliest churches built in the Byzantine capital. It was commissioned by Constantinople’s founder, Roman Emperor Constantine the Great (r. 324-337) but unfortunately, the original church was destroyed during the Nika riots in 532. Emperor Justinian I had it rebuilt in the mid-6th century but the church suffered severe damage during an earthquake two centuries later. Much of the today’s appearance of the church thus dates to the 8th century. Hagia Irene is now a museum but it is also used to host various musical events. 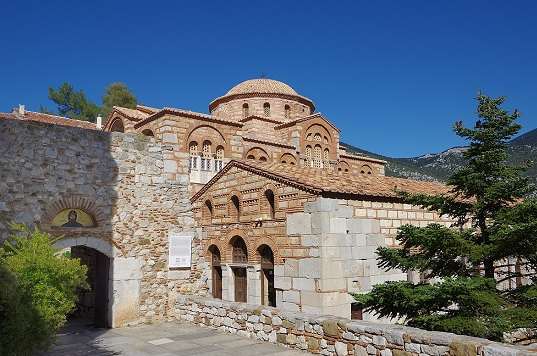 Hosios Loukas is a 10th century monastery at the Greek town of Distomo (near Delphi) and one of the finest examples of Byzantine architecture from the so-called Second Golden Age or Middle Byzantine Period, which roughly corresponds to the rule of the Macedonian dynasty (from the mid-9th to the early 11th century). Designated as a UNESCO World Heritage Site in 1990, the monastery was famous throughout the Empire for its splendid decoration including lavish mosaics, frescoes and marble works. These, just like cross-in-square church plan, were typical for the Middle Byzantine Period. 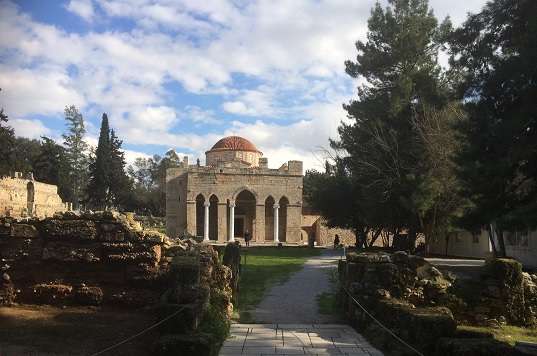 A part of the UNESCO World Heritage Site of “Monasteries of Daphni, Hosios Loukas and Nea Moni of Chios”, the Daphni Monastery is another outstanding example of the so-called cross-in-square plan (the principal church) and the Middle Byzantine Period. The current monastery and church were built in the 11th century on a site of an earlier monastery (deserted in the 7th and 8th centuries due to the Slav invasions) which in turn was built on a site of an ancient Greek temple that was demolished in the late 4th century. The monastery complex is currently undergoing restoration and is closed to visitors. 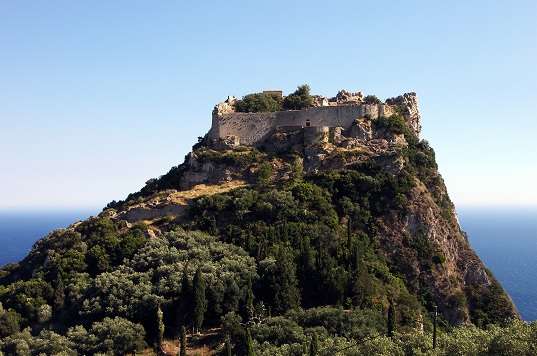 Situated on the top of a 1,000 feet tall hill on the island of Corfu, Greece, Angelocastro was one of the most important Byzantine strongholds in the Ionian Sea. The castle played the key role in the island’s defense and successfully withstood as many as three sieges of the Ottoman Turks. It remains unknown when the imposing castle was built but it is thought to have been erected sometime in the 13th century, probably during the rule of Michael I Komnenos Doukas, Despot of Epirus (r. 1205-1215) and his immediate successors although some also date it to the late 12th century. 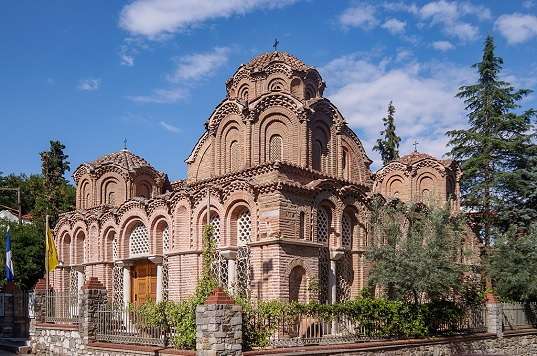 The Church of Saint Catherine in the old town of Thessaloniki, Greece, is one of the most beautifully preserved Byzantine churches even though it served as a mosque for much of its existence. The exact time of its construction is unknown but it has been dated to the period of the Palaiologos dynasty that ruled the Byzantine Empire from 1261 until its downfall in 1453. The new Ottomans rulers didn’t convert it to a mosque immediately but it didn’t take long for it to meet the fate of Hagia Sophia and many other Byzantine churches. In 1988, it was declared a UNESCO World Heritage Site as a part of “Paleochristian and Byzantine monuments of Thessaloniki”. 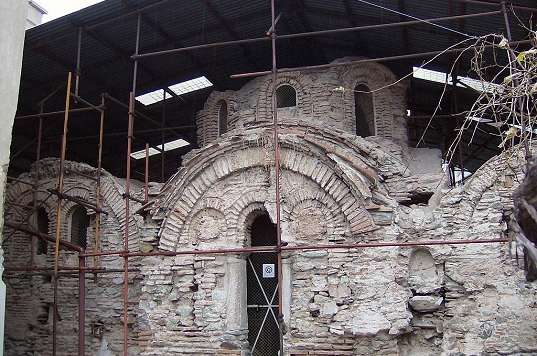 Another masterpiece of Byzantine architecture that was added to the UNESCO World Heritage Site of “Paleochristian and Byzantine Monuments of Thessaloniki” was built at the end of the 13th and beginning of the 14th century, and remained in use for as long as seven centuries. The only surviving Byzantine bath in Greece was used by both men and women, both during the Byzantine era and the later Ottoman period. However, the Ottomans divided it into two separate sections, one for men and one for women. During the Byzantine period, men and women used the bath alternately.