In ancient times, when people looked up at the sky, they thought they lived in a dome because they didn't know about the laws of nature. Early philosophers were pre-scientific scientists; they were asking questions about the cosmos and what its basic constituents are and its origin and what the place of humanity is within it. Here is our list of top 10 famous philosophers that laid the foundations for the modern world. 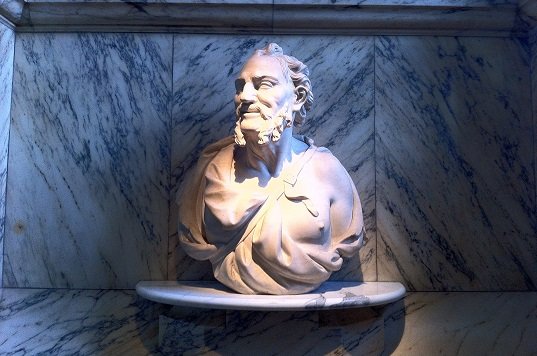 Happiness resides not in possessions, and not in gold, happiness dwells in the soul.

Nothing exists except atoms and empty space; everything else is opinion.

Do not trust all men, but trust men of worth; the former course is silly, the latter a mark of prudence.

Everything existing in the universe is the fruit of chance and necessity.

I would rather discover one scientific fact than become King of Persia.

By desiring little, a poor man makes himself rich.

It is greed to do all the talking but not to want to listen at all.

Our sins are more easily remembered than our good deeds.

If thou suffer injustice, console thyself; the true unhappiness is in doing it.

Democritus was an ancient Greek philosopher, and one of the first atheists in history. He offered a materialistic explanation of the world and did not refer to gods or spirits. Democritus and his teacher Leucippus, are credited with the development of the atomic theory. They had absolutely no scientific reason for thinking so but proposed all matter was made of invisible particles, known as atoms. 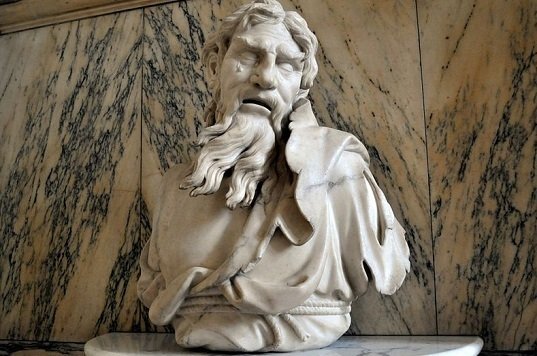 There is nothing permanent except change.

Nothing endures but change.

You could not step twice into the same rivers; for other waters are ever flowing on to you.

A man's character is his fate.

Much learning does not teach understanding.

The road up and the road down is one and the same.

Man is most nearly himself when he achieves the seriousness of a child at play.

All is flux, nothing stays still.

Heraclitus was known as the weeping philosopher supposedly because of his melancholic view of life. He had a reputation for being obscure and misanthropic and is well known for his aphoristic sayings such as ‘You can never step into the same river twice’ because Heraclitus held that the cosmos was in a constant state of flux; the notion that everything in the world flows and compares the universe to a river. 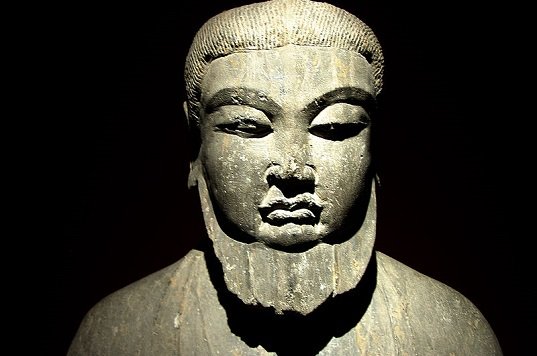 Being deeply loved by someone gives you strength, while loving someone deeply gives you courage.

Nature does not hurry, yet everything is accomplished.

A good traveler has no fixed plans, and is not intent on arriving.

When I let go of what I am, I become what I might be.

Mastering others is strength. Mastering yourself is true power.

If you do not change direction, you may end up where you are heading.

Music in the soul can be heard by the universe.

To the mind that is still, the whole universe surrenders.

Despite the otherwise impressive record of meticulous chronicles and lists of rulers, officials and other dignitaries of archaic China, almost nothing is known about Laozi. Even the meaning of his name is uncertain; the most likely interpretation is ‘old master.’ In the western world, Laozi is usually understood as an ancient Chinese philosopher and is considered the founder of Taoism, which is one of the three teachings of Chinese philosophy and belief with Confucianism and Buddhism. 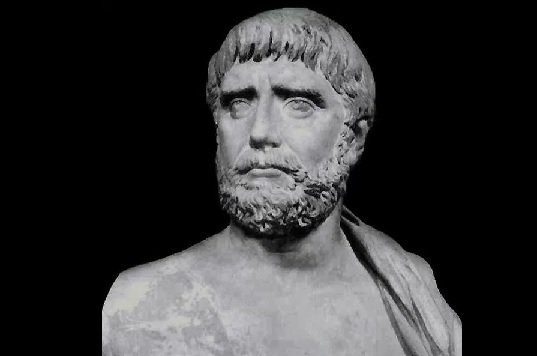 The most difficult thing in life is to know yourself.

Hope is the only good that is common to all men; those who have nothing else possess hope still.

Nothing is more active than thought, for it travels over the universe, and nothing is stronger than necessity for all must submit to it.

Water is the first principle of everything.

Time is the wisest of all things that are; for it brings everything to light.

A multitude of words is no proof of a prudent mind.

Avoid doing what you would blame others for doing.

Necessity is the strongest of things, for it rules everything.

Nothing is more ancient than God, for he was never created.

Place is the greatest thing, as it contains all things.

Thales was a pre-Socratic natural philosopher, geometer, and astronomer born in Miletus. Thales argued against the mythological way of explaining life; he had the incredibly optimistic idea that human beings can uncover the true workings of nature, with our mind and senses. According to the philosopher Edmund Husserl, philosophy began with individuals, such as Thales, who lived the philosophical life. It inspired others to do the same and led to new forms of communication which spread across the borders. 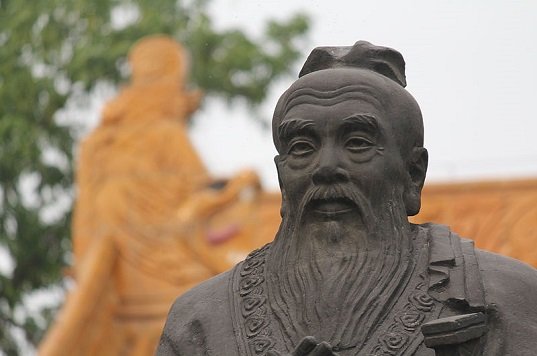 I hear and I forget. I see and I remember. I do and I understand.

It does not matter how slowly you go so long as you do not stop.

Choose a job you love, and you will never have to work a day in your life.

Everything has its beauty, but not everyone sees it.

Our greatest glory is not in never falling, but in rising every time we fall.

Wheresoever you go, go with all your heart.

I want you to be everything that's you, deep at the center of your being.

Before you embark on a journey of revenge, dig two graves.

The man who moves a mountain begins by carrying away small stones.

Real knowledge is to know the extent of one's ignorance.

His name was Kong Qiu and respectfully called Kongzi (Master Kong.) Latinized the name is Confucius. Confucious is considered to be the father of the Eastern style of thought. His philosophy of morality, correct social relationships, justice, and honesty, became official teaching during the Han Dynasty and known as Confucianism. When asked to summarize his teachings in a single phrase, Confucious said, ‘what you do not wish for yourself, do not do to others.’ 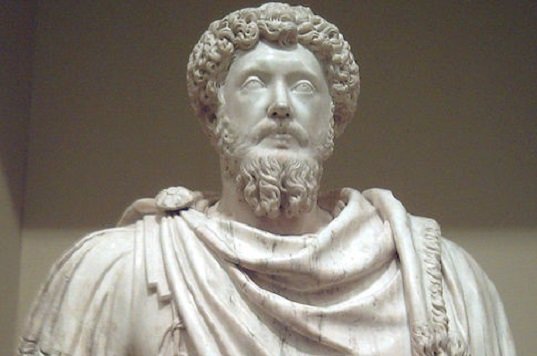 When you arise in the morning, think of what a precious privilege it is to be alive - to breathe, to think, to enjoy, to love.

You have power over your mind - not outside events. Realize this, and you will find strength.

Very little is needed to make a happy life; it is all within yourself, in your way of thinking.

Death smiles at us all, but all a man can do is smile back.

The soul becomes dyed with the color of its thoughts.

Waste no more time arguing about what a good man should be. Be one.

The universe is change; our life is what our thoughts make it.

A man's worth is no greater than his ambitions.

The object of life is not to be on the side of the majority, but to escape finding oneself in the ranks of the insane.

Marcus Aurelius Antoninus Augustus better known simply as Marcus Aurelius was a Roman Emperor and a Stoic philosopher. Marcus was influenced by the writings of Epictetus and believed the Stoic idea that all events in the universe will recur in future world cycles. The Meditations; a series of personal writings by Marcus was written without any intention of publication but is considered a literary monument to the Stoic philosophy. 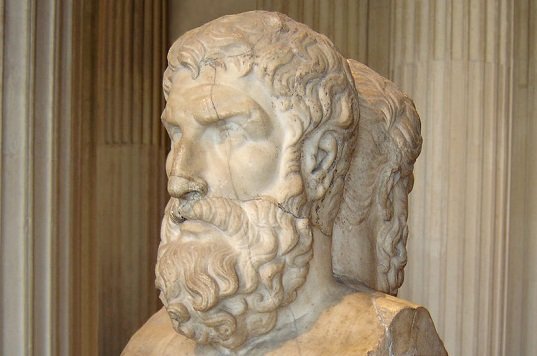 Death is nothing to us, since when we are, death has not come, and when death has come, we are not.

Not what we have But what we enjoy, constitutes our abundance.

Death does not concern us, because as long as we exist, death is not here. And when it does come, we no longer exist.

You don't develop courage by being happy in your relationships everyday. You develop it by surviving difficult times and challenging adversity.

If thou wilt make a man happy, add not unto his riches but take away from his desires.

It is not so much our friends' help that helps us as the confident knowledge that they will help us.

The art of living well and the art of dying well are one.

Nothing is enough for the man to whom enough is too little.

Of all the things which wisdom provides to make us entirely happy, much the greatest is the possession of friendship.

Epicurus was a Greek philosopher, a follower of Democritus and founder of Epicureanism, which is teaching focused on the search for happiness and wisdom. Epicurus was perhaps the earliest radical believer in human equality, certainly in the western world. He allowed women and slaves to attend his school because he saw no distinction. 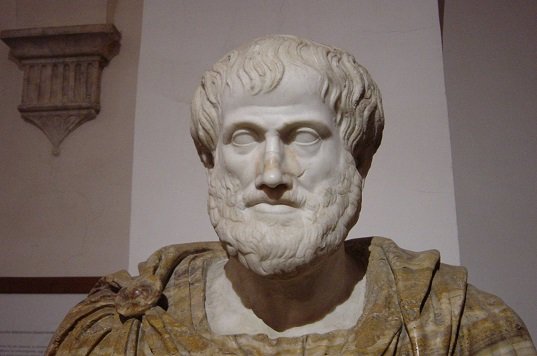 We are what we repeatedly do. Excellence, then, is not an act, but a habit.

It is the mark of an educated mind to be able to entertain a thought without accepting it.

The whole is more than the sum of its parts.

Man is by nature a political animal.

The roots of education are bitter, but the fruit is sweet.

Happiness is the meaning and the purpose of life, the whole aim and end of human existence.

What is a friend? A single soul dwelling in two bodies.

Happiness depends upon ourselves.

Pleasure in the job puts perfection in the work.

Aristotle is one of the most famous and influential philosophers and naturalists in history. A student of Plato, and later tutor to Alexander the Great. Aristotle was an empiricist focused on the A Posteriori routes to knowledge, that is, we gain knowledge by looking at the world and understanding it. Famously Aristotle worked out that an eclipse was caused by the moon moving between the Earth and the Sun or by the Earth itself moving in front of the Sun, and a shadow is cast across our field of vision. Therefore, the Earth must be spherical. 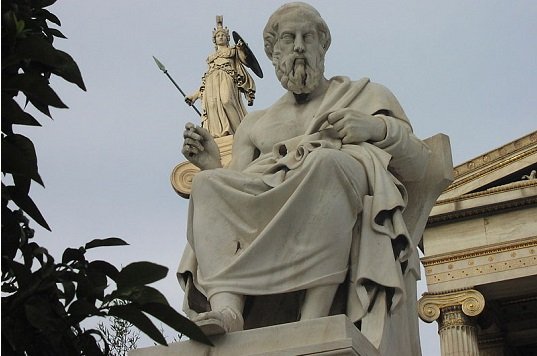 Only the dead have seen the end of war.

Be kind, for everyone you meet is fighting a hard battle.

The measure of a man is what he does with power.

Love is a serious mental disease.

Music is a moral law. It gives soul to the universe, wings to the mind, flight to the imagination, and charm and gaiety to life and to everything.

You can discover more about a person in an hour of play than in a year of conversation.

At the touch of love everyone becomes a poet.

One of the penalties for refusing to participate in politics is that you end up being governed by your inferiors.

Plato was the prime pupil of Socrates, and in fact, a lot of what Socrates is said to have written may belong to Plato. He was a rational philosopher or rather a priori, which means you try to work out knowledge logically, you don’t gain it from your senses. Plato founded the Platonic Academy, the oldest institutional school of philosophy in Greece, from which Platonism spread through the ancient world. 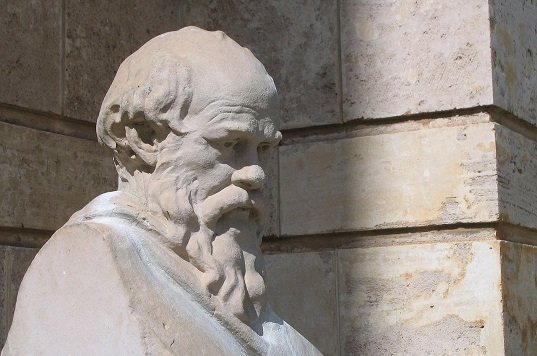 An unexamined life is not worth living.

True knowledge exists in knowing that you know nothing.

Beware the barrenness of a busy life.

When the debate is over, slander becomes the tool of the loser.

I cannot teach anybody anything, I can only make them think.

There is only one good, knowledge, and one evil, ignorance.

Education is the kindling of a flame, not the filling of a vessel.

All the information about Socrates has come to us through his pupils Plato and Xenophon because Socrates himself could not read or write. His death sentence and his frequent presence in his disciple’s dialogues helped to make him one of the most famous philosophers of all time. Socrates outstanding significance is shown above all in its lasting effect within the history of philosophy, but also in the fact that the Greek thinkers before him today are called pre-Socratic.