You are here: History Lists · Other · Top 10 Pirate Flags from the Golden Age of Piracy

Top 10 Pirate Flags from the Golden Age of Piracy

Sailors who lived in the Golden Age of Piracy knew that when they saw a ship that dawned a pirate flag (or Jolly Rodger), they had to prepare to either fight or surrender. Although not all pirate ships used Jolly Rogers to warn other ships of their impending doom (others used normal flags to trick ships into lowering their guard), some captain pirates flew their flags up high as a symbol of terror. In the following list, we take a look at 10 famous pirate flags whose sight would strike fear into the hearts of sailors from the Caribbean Sea to the Atlantic Ocean. 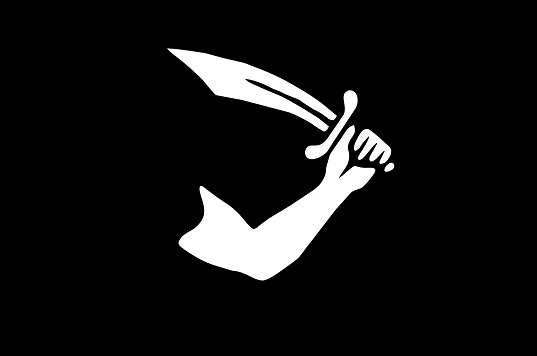 Tew was a 17th century English pirate who was famously known as the Rhode Island Pirate, and before his career in piracy begun, he was a privateer. He is most known for embarking on two major pirate cruises; he met his demise on the second cruise. The flag he flew on his ship was black and had an arm on it that was holding a cutlass. Although the sword signaled that violence was imminent, the black background was meant to signal that there was no need for bloodshed; pirates who wanted to show that violence was unavoidable used a red background. 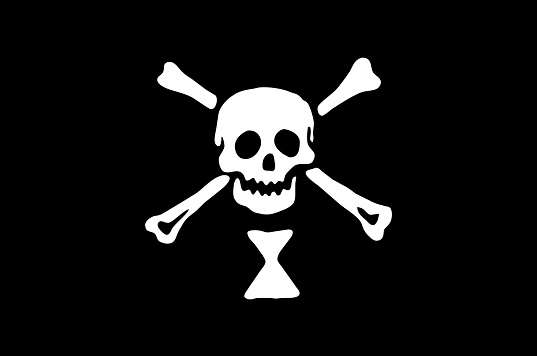 Wynn is an 18th century French pirate who was known for raiding Spanish and English ships that sailed in the Caribbean Sea. He is also famous for being among the first pirates to use the Jolly Roger design. According to eye-witness accounts, Wynn’s design had two crossed bones with a skull and an hour glass beneath them on a black background. The hour glass meant that time was running out for any ship he and his crew attacked. 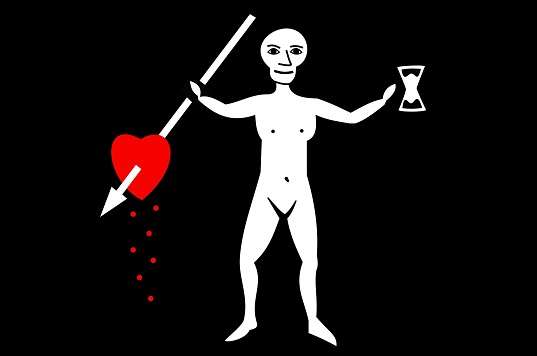 John Quelch was an English pirate who had a short but very lucrative career that only lasted a single year. His Jolly Roger depicted a figure holding an hour glass in the left hand and a spear in the right hand. The spear was piercing a red heart dripping with blood, meaning death was surely coming. Another famous pirate that is rumored to have used this design, which is also known as “Old Roger,” is John Phillips. The evidence that Quelch ever used this design is lacking, but it is still attributed to him. 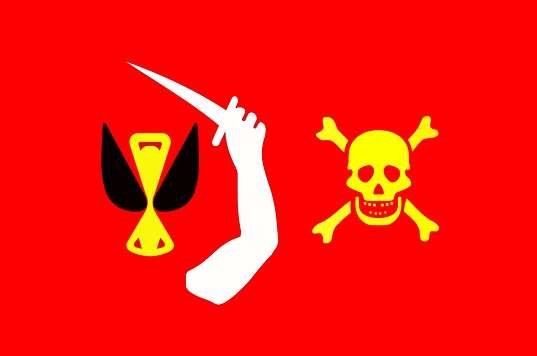 Christopher Moody was a former member of Bartholomew Roberts’ crew and is known for his savage “no quarter” policy, which meant no lives will be spared on the ships he attacked. His raiding grounds where believed to be North and South Carolina. His flag was is notable for being a little more different than those of other pirates. It was red and featured gold painted skull and bones on one side, a golden hour glass with black wings on the other, and a white hand holding a cutlass in the middle. The wings on the hour glass meant that time is flying away, and cutlass together with the red background meant he will definitely enforce his policy. 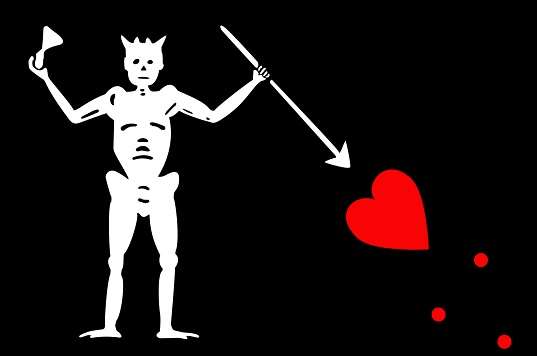 Teach’s other more famous name was Blackbeard, and he was well known for his theatrics and commandeering ships using fear rather than force. According to legend, he used to put fuses in his beard and light them during a battle in order for the smoke to give him a demonic appearance and instill fear in his enemies. His flag had a horned skeleton making a toast in one hand and holding a spear in the other and pointing it to a red heart dripping with blood. The horns were meant to give it a devilish appearance, and the dripping heart meant a very slow and torturous death was coming to those he attacked. 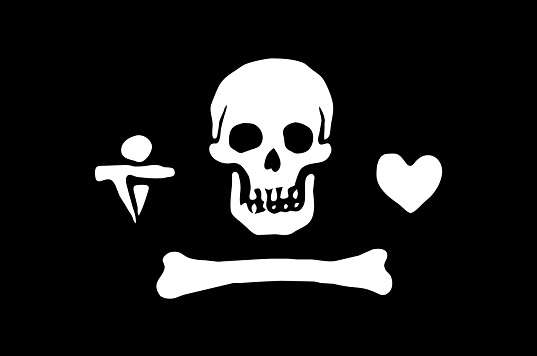 Bonnet was a wealthy English landowner before he decided to turn to piracy in the early 18th century. He usually attached ships in the Caribbean Seas and the Atlantic Ocean. Because of his former status as a high-ranking member of society, he was sometimes referred to as “The Gentleman Pirate”. His Jolly Roger had a skull and a single bone underneath it with a knife (violence) on one side and a heart (life) on the other; it was meant to represent the scale of pirate justice. 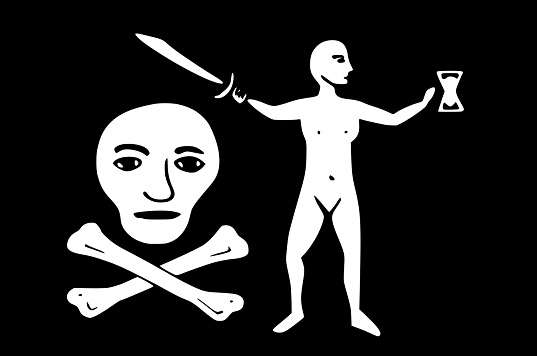 Kennedy was another English pirate that was once a member of Bartholomew Roberts’ crew. After Roberts left him in charge of one of his ships, the Royal Rover, Kennedy saw this as an opportunity be his own captain and left Roberts’ crew; taking the ship with him. His Jolly Roger had a face with two crossed bones underneath it, and standing next to it was a naked figure holding a sword in one hand and an hour glass in the other. The naked figure represented Kennedy’s lack of shame. 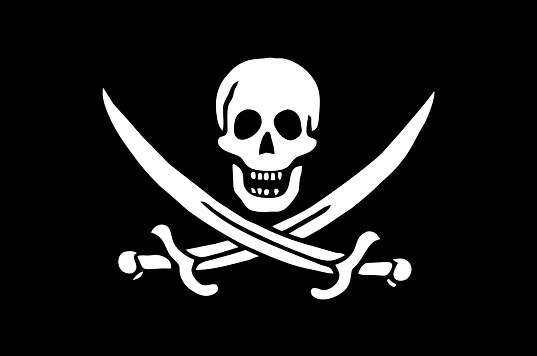 Infamously known as Calico Jack, this English pirate’s career was more active as the Golden Age of Piracy was coming to an end. Calico Jack terrorized the Caribbean Sea with his crew. His flag is more notable because it is one of the more famous Jolly Roger variations. While the original Jolly Roger is a black flag with a white skull and two crossed bones underneath it, Rackham’s version replaced the bones with swords. The swords were meant to signal the pirate and his crew were ready and willing to get violent if the ship being attacked did not surrender. 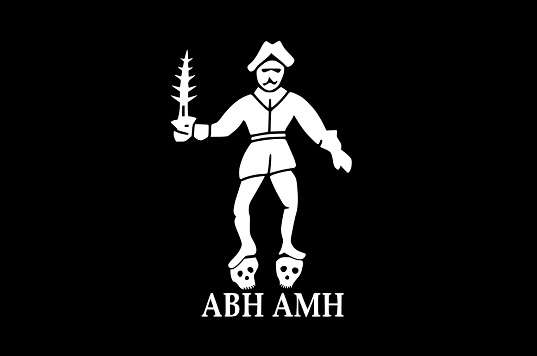 Also known as Black Bart, Bartholomew Roberts was a Welsh pirate and, arguably, one of the most successful pirates ever. Throughout his pirate career, which was active during the Golden Age of Piracy, he managed to capture 400 ships along the Americas and West Africa. His flag was a representation of himself holding a holding a sword while standing on two heads and the initials ABH (A Barbadian’s Head) and AMH (A Martiniquan’s Head) written underneath him. Initials that appear on a pirate flag refer to either the captain or his enemies. 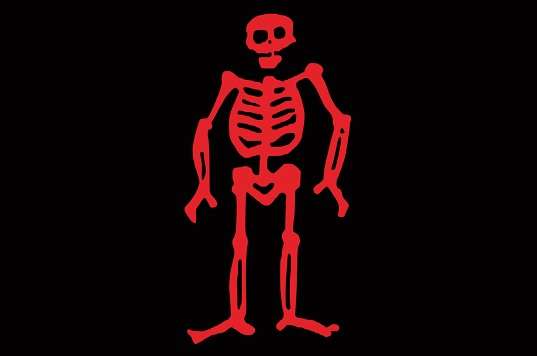 Edward Low is another 18th century English pirate who rose to prominence towards the end of the Golden Age of Piracy and had a brief career. Low is mostly famous for his cold-blooded and brutal nature; he was the very definition of a vicious pirate. The sight of his flag signaled to the people on other ships that their deaths will be extremely painful ones. Low’s flew a black Jolly Rodger with a red skeleton on it, which was meant to represent the sheer evil and anger of Low and his crew and that a very violent and bloody death was imminent.