You are here: History Lists · Other · List of 9 Fascinating Medieval Creatures

Legendary creatures such as dragons and unicorns hold a special place in the popular culture of our time. Images of horrifying beasts we can meet in epic and high fantasy books and movies rely heavily on the descriptions of beings that were depicted in medieval bestiaries. Medieval beings are surprisingly diverse in form - some of them are animal hybrids, animal-human hybrids, while some are largely humanoid creatures - but they all have something in common. Each and every legendary being from The Middle Ages fascinates us by their distinct story. 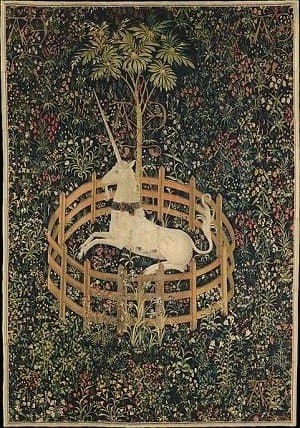 The least scary mythological creature on this list, Unicorn is traditionally described as a white horse-like or goat-like animal with a long spiraling horn on his forehead. It has a power to heal sickness and purify poisoned water. It is mystically associated with young women - only a maiden can subdue a unicorn. In Physiologus, the ancient Greek bestiary, which all medieval bestiaries ultimately are derived from, the unicorn is portrayed as a tough, aggressive animal that can be trapped only if there is a virgin maiden present. Medieval writers associated the unicorn to Christ. Its single horn signifies the unity of God and Christ, while its small size symbolizes Christ’s humility. Dragons are well-known creatures from folklore and different mythologies across the globe, but their descriptions are not always the same. Almost every nation has its own version of how these creatures look like and how menacing they are. Dragon’s blood is believed to have magical properties. In Europe, the dragon is usually described as a large fire-breathing creature, with wings, legs, and a powerful tail. The typical dragon looks after a castle or cave and some hidden treasure. In legends, individual dragons are linked to heroes who fought them. In ancient time, dragons were typically depicted as serpents. In the Middle Ages, it has become widespread to illustrate them as a lizard with legs. In Christian mythology, the dragon, as the greatest of all serpents, is associated with Satan. 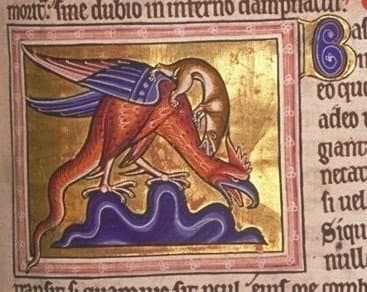 Basilisk means “little king” in Greek (the Latin name is Regulus, which means the same). This legendary creature is the king of the serpents. It is a small serpent that is depicted as a crested snake or as a rooster with a snake’s tail. A basilisk is hatched from a male bird’s egg, and only the weasel can kill it. Basilisk is an extremely venomous and deadly creature - it can kill other snakes by its smell, and a man with a single glance. It can even kill with its voice, by hissing, which is why it is also called the Sibelius. Basilisk has been mentioned numerous times in literature - from Bible, the works of Shakespeare, Richardson, Swift, Browning, Pope, and Dickens - all the way to “Happy Potter”. 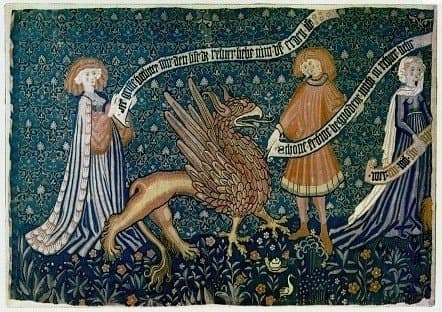 The griffin (also: griffon, or gryphon) is a legendary beast with the body, tail, and back legs of a lion; the head and wings of an eagle. Closely linked with the lion, the king of animals, and the eagle, the king of all birds, the griffin is the king of all creatures. Just like dragons, griffins are known for protecting treasures. In ancient time, the griffin was a symbol of divine power and a protector of gods. In the Middle Ages, it also became a symbol of fidelity, because these creatures mated for life and if either partner died, the other would continue the rest of its life alone. The origin of the griffin is from Hyperborean mountains or Ethiopia. It feeds its young with men’s meat and it is strong enough to overpower an entire live ox. The arch-enemy of this creature is the horse. 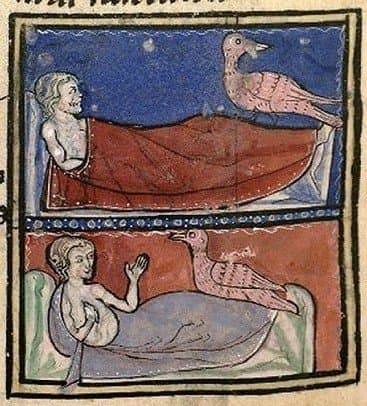 Caladrius is a mythological bird, as white as snow, which resides in the houses of kings. It has the power to heal the sick by taking the illness into itself and flying away, diffusing it towards the sun. It also has prophetic powers. If it gazes into the face of an ill person, it means that he will survive, but if this bird looks to the other side, the sick person will die. In medieval Christian mythology, the caladrius represents Christ, its whiteness symbolising Christ’s purity from sin. Christ took away the sins of the others, and Caladrius has the ability to take sickness away. 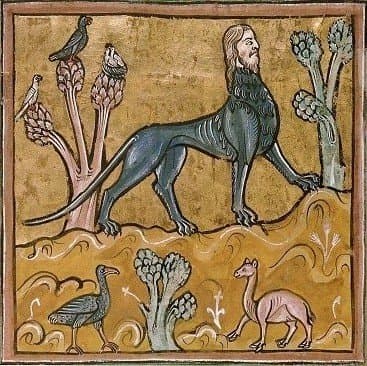 The manticore is a legendary creature from Persian mythology. It was widely known in the Middle Ages because it had been described in Pliny’s book, which was very popular at that time. Pseudo-etymologically, the word manticore was believed to mean “mantiger”. The manticore has the body of a red lion and a human head. It has three rows of teeth, wings of a bat, and the voice that resembles the sound of a trumpet. The most powerful weapon of the manticore is its tail. It looks like a tail of a scorpion (according to some sources, it is like a tail of a dragon). It eats its victims completely and leaves no traces such as clothes, bones, or belongings. 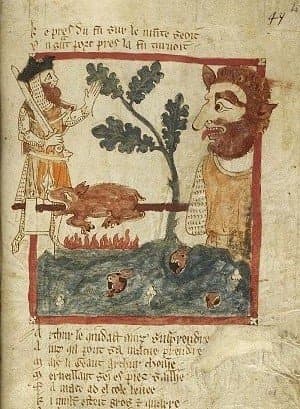 Ogres and ogresses are medieval European legendary beings, mythic humanoids, which were depicted in various legends and fairy-tales. An ogre is a typically described as an enormous, extremely ugly, human-like creature. It has excessively large head and a robust body. It eats people, mainly babies and young children. 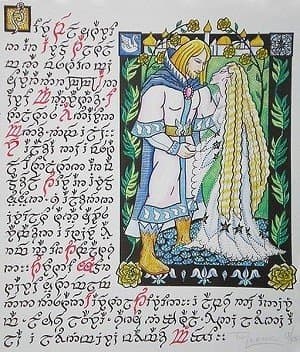 Elves are miniature creatures that originally appeared in German, English, Scottish, and Icelandic folklore. They resemble diminutive human beings and are menacing pagan divinities. They were believed to cause diseases, give bad dreams, and even seduce people into sexual affairs. Elves were also believed to steal healthy children and substitute them with deformed or week elf children. In rare occasions, they were benevolent and willing to help people. The perception of these creatures has evolved through the medieval time. Gradually, they have become females rather than males. They were linked with fairies from medieval romance traditions, and sexual attraction became one of their predominant attributes. Elves are also connected with the obscure knowledge of alchemy. 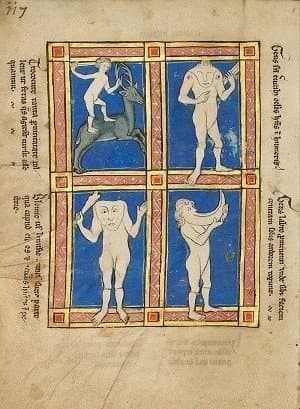 According to an ancient belief, headless men (Greek: akephaloi; Latin: Blemmyae) live in remote parts of the world. They don’t have heads and their faces are positioned on their chest, while some of them have eyes on the shoulders. The headless people have also been depicted on medieval maps, such as The Hereford Mappa Mundi.