You are here: History Lists · Other · List of 15 Most Worshiped Ancient Egyptian Gods and Goddesses

List of 15 Most Worshiped Ancient Egyptian Gods and Goddesses 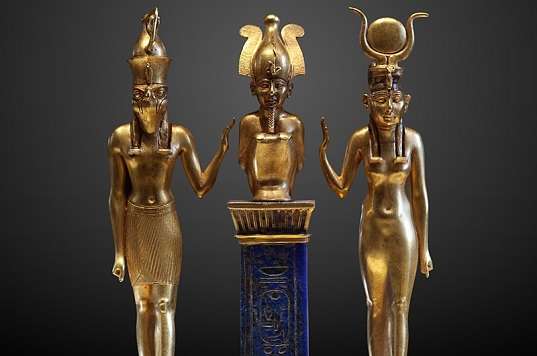 Osiris was a wise king who was married to his sister Isis. When he was murdered by their evil brother Seth, she used magic to bring him back to life to conceive a son, Horus who revenged his father’s death and killed his uncle. His son became the king of Egypt, while Osiris became the king of the dead and the judge of the underworld. Egyptians thus saw him as triumphant over death; every pharaoh would be Osiris after death whilst he was the embodiment of Horus when alive. Osiris was also the god of vegetation and was often painted with green skin, symbolizing new growth and renewal. 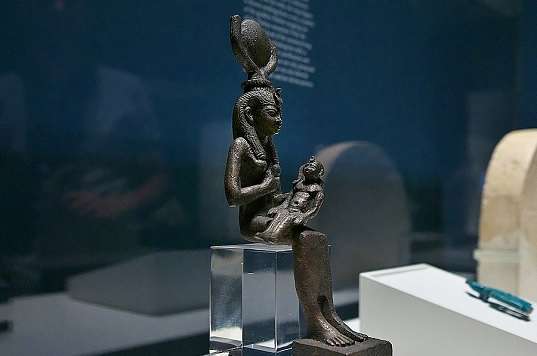 Isis was the ultimate goddess for she was the mother of Horus and both wife and sister of Osiris. When her beloved husband was murdered by their brother Seth, she collected the dismembered parts of Osiris’ body and put them together with bandages, laying the foundation for the ancient Egyptian practice of mummifying their deceased. By bringing Osiris back to life, Isis also introduced the concept of resurrection that profoundly influenced other religions as well, including Christianity. Isis, portrayed as a woman holding an Ankh in her hand and sometimes with a female body and cow’s head or cow’s horns was also worshiped as goddess of fertility. 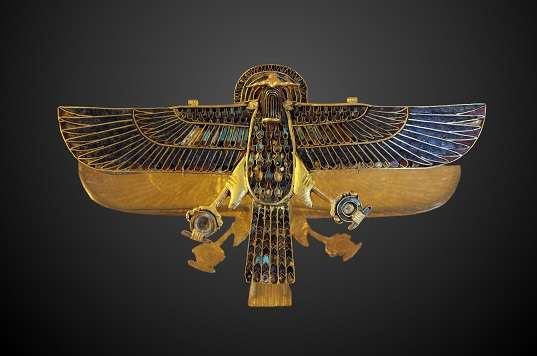 One of the most important ancient Egyptian gods was the son of Osiris and Isis. According to the famous myth, he revenged his father’s murder and killed his uncle Seth by which he established himself as the new king of Egypt. The early Egyptian pharaohs therefore legitimized their rule by presenting themselves as incarnated Horus. Also worshiped as the god of light and sky, Horus was usually depicted as a falcon-headed male creature wearing a white and red crown. 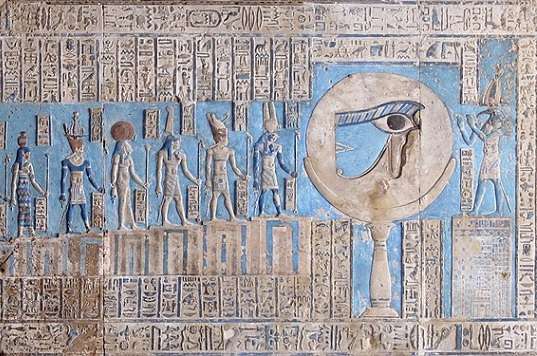 The god of wisdom, writing and magic was most often portrayed as an ibis-headed man. Thoth was the scribe of the underworld who recorded the verdict on the deceased in the Hall of Maat, maintained the library of the gods, authored the spells in “The Book of the Dead” and wrote “The Book of Thoth” (containing the secrets of the universe). But he also played an important role in many ancient Egyptian myths, acting as an arbiter between the forces of good and evil. 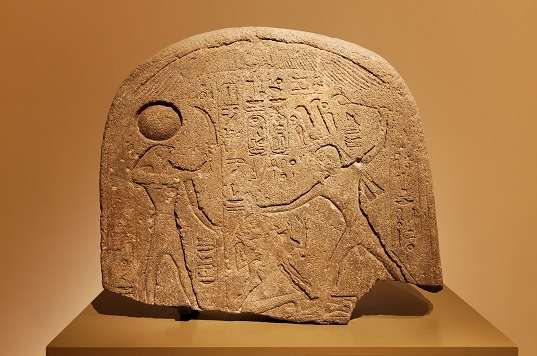 Ra or Re was the sun god and one of the most important ancient Egyptian deities. He was also associated with pyramid building and the resurrection of the pharaohs. Symbolically born every morning with sunrise, Ra symbolically died with every sunset after which he began his journey into the underworld. In the later period, Ra became closely associated with Horus and just like the latter, he was usually portrayed as a falcon-headed man. However, rather than with white and red crown, Ra was depicted wearing a solar disc on his head.. 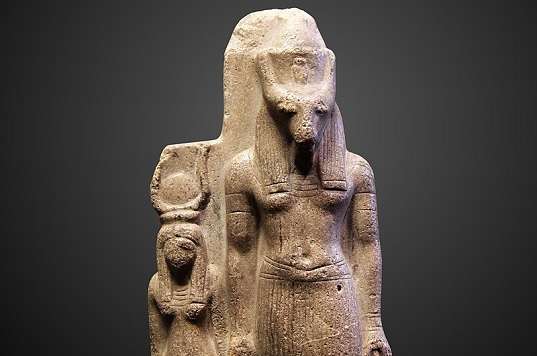 Seth or Set was the god of desert and storms who later also became associated with chaos and darkness. He was painted as a man with the head of a dog with a long snout and forked tail but he was sometimes also depicted as pig, crocodile, scorpion and hippopotamus. Seth is also one of the leading characters of the legend of Osiris and Isis, and as a result of the growing popularity of the Osiris cult, Seth became demonized and his images were removed from the temples. In some parts of ancient Egypt, however, he continued to be worshiped as one the chief deities. 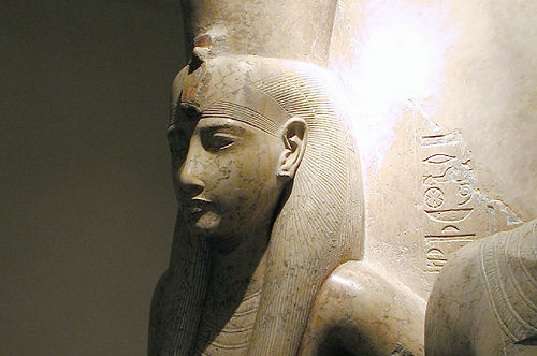 As the wife of Amon and mother of Khons, Mut was one of the chief Theban gods. Venerated as the great divine mother, Mut was usually depicted as a woman wearing a white and red crown but she was sometimes also portrayed with the head or body of a vulture and as a cow because in the later period, she merged with Hathor, another great divine mother who was usually depicted as a woman with cow horns and as a cow. 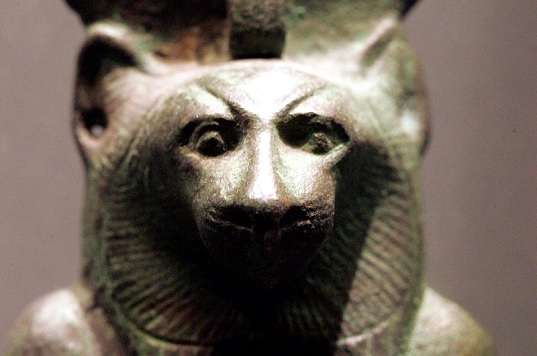 Bastet was a feline goddess who was depicted either as a cat or woman with the head of a cat. She was the daughter of the sun god Ra and was closely associated with domesticated cat. Bastet was worshiped for her maternal, protective nature and was often painted surrounded by kittens. But she was also believed to be ferocious when necessary for cats were able to kill snakes - one the most deadly creatures in ancient Egypt. 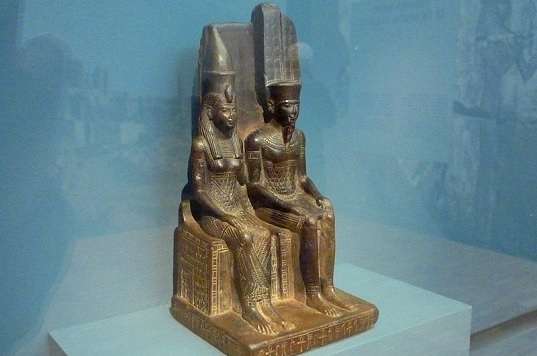 Amun or Amon which translates into “The Hidden One” was the head of the Theban pantheon of gods and goddesses. Worshiped as the king of gods (similarly as Zeus by ancient Greeks), Amun was usually painted in a human form but he was sometimes also portrayed with the ram’s head. Like many other ancient Egyptian gods and goddesses that were eventually assimilated with their local/regional versions, Amun was later merged with Ra into Amun-Ra which remained the chief god throughout the period of ancient Egypt. 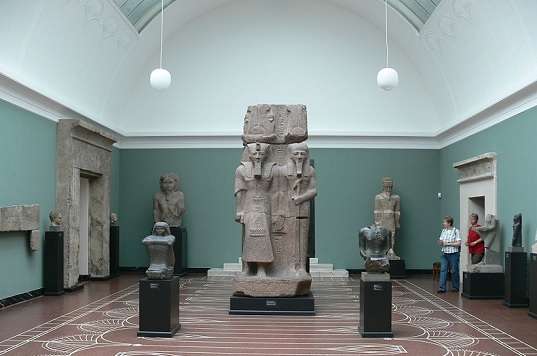 Ptah began as a local god in Memphis but as the influence of Memphis expanded over Egypt, he became popular elsewhere as well. He was the creator-god and the patron deity of crafts and craftsmanship. Ptah was usually depicted as a mummified figure with his hands protruding through the bandaging to hold a staff with the symbols of dominion and stability. 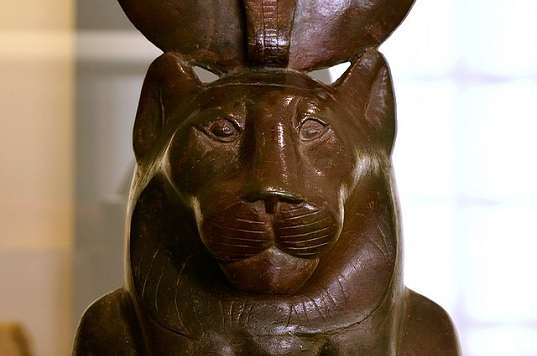 Wadjet was worshiped as a cobra and was often included in royal insignia as a symbol of sovereignty over Egypt. She was seen as the protector of the living Horus – the pharaoh. Wadjet was painted as poised and ready to strike at any potential enemy of the pharaoh. She was sometimes also depicted as a woman with two snake heads. Depiction of Wadjet with a sun disc is known as the uraneus, a popular emblem adorning the crowns of ancient Egypt rulers. 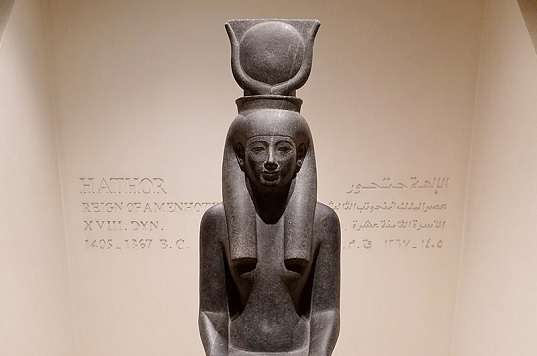 Hathor was the cow goddess who was associated with dancing and music but she was also known as the Lady of Heaven, Earth and the Underworld. She was very popular among ancient Egyptians and was seen as wise, gentle and affectionate to both the living and dead. She protected women during pregnancy and childbirth, and was also worshiped as goddess as fertility. Hathor was most often portrayed as a woman with cow horns featuring uraneus (Wadjet and sun disc). 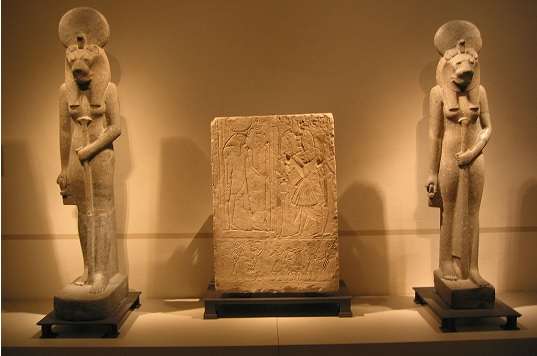 Sekhmet was the goddess of war who was depicted as the lion-headed goddess. She was the “Powerful One” and destroyed the enemies of Ra but she also helped kings against their opponents. Sekhmet was also associated with medicine and both disease and health. Her portrayal as a lioness or lion-headed woman often included the uraneus, a symbol of royalty and divine authority of the Egyptian pharaohs. 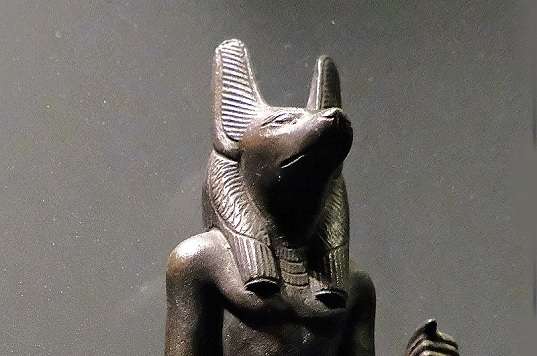 Anubis was a jackal-headed god, the divine embalmer who was closely associated with mummification and the afterlife; he was the custodian of the dead on their journey into the afterlife. Anubis’ black skin (a color associated with the dark Nile deposits that made farming in ancient Egypt so successful) was a symbol of rebirth. He also attended the “Weighting of the Heart” ceremony in the afterlife. 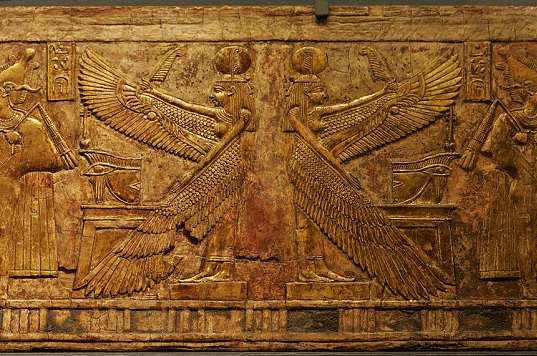 Maat was the personification and goddess of truth, morality, justice, order, and harmony. She symbolized the natural equilibrium of the universe; she was the opposite of chaos and therefore the highest attainment of Egypt. The “Weighing of the Heart” ceremony as depicted in the Book of the Dead took place in the Hall of Maat. She was typically portrayed as a woman with an ostrich feather on her head.