You are here: History Lists · Other · List of 10 Dante Inferno Books

As a cornerstone of Western literature, Dante's The Divine Comedy, and especially it's first part, Inferno, is being read critically by numerous scholars through ages, producing everlasting debates on the meaning of the Comedy and Dante's intentions. Dante completed the Comedia in 1320. Hundreds of notable books on this subject were published since then.

This list contains the best critical readings of Inferno, and the Comedy in whole, which are appealing to contemporary readers of Dante. The oldest book on this list was originally published in 1953, and the newest in 2016. Some are suitable for beginners and general readers, while some require previous literary knowledge - and this is not the most important difference between these titles.

No book from this list can be replaced with another. Written mostly by scholars who invested a lifetime in studying Dante, they all offer different approaches to Inferno and the Comedy. And it can be read in so many ways.

While some authors, through exegesis, emphasize the theological aspect of Dante's work, the others, with equal eloquence and authority, propose "detheologization" of reading. Some authors are focused on the political background of Inferno, some on the geography of Hell, and some on the language and narrative of the Comedy. They all know the work of their predecessors very well, and they offer new facts and interpretations. While the position of items on this list can be argued, each of these books deserves to be on it.

Danteworlds: A Reader's Guide to the Inferno by Guy P. Raffa (2007) 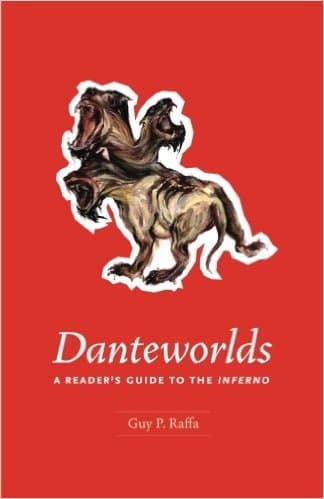 Ideal for a broad audience and first-time readers of Inferno, this book, serves as a guide through Dante’s underworld circle by circle and gives concise information on all the major persons, deities, and creatures encountered by Dante in the course of his journey.

Dante: The Story of His Life by Marco Santagata (2016) 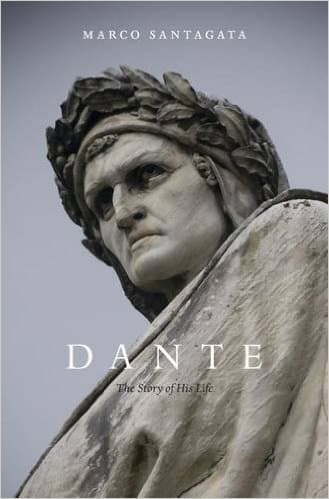 The newest biography of Dante shows how the composition of the Commedia, especially Inferno, was influenced by local and regional politics. Having in mind unspeakably cruel conflicts between Guelfs and Ghibellines in Florence, it would be hard to miss the continuity between history and the Inferno. “Reading Marco Santagata’s fascinating new biography, the reader is soon forced to acknowledge that one of the cornerstones of Western literature [The Divine Comedy], a poem considered sublime and universal, is the product of vicious factionalism and packed with local scandal.” (Tim Parks, London Review of Books) 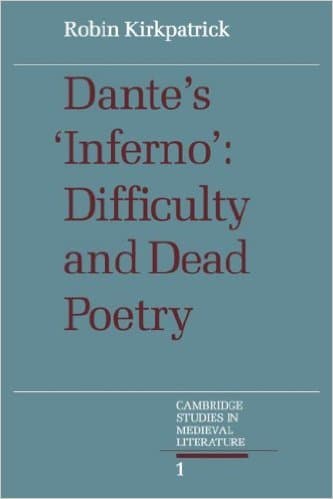 Written in the accessible language of interpretative criticism, this study argues that Dante’s thinking and poetry are subject to far greater internal tension than is commonly supposed. Dr. Kirkpatrick is particularly concerned with features of language and structure which scholars have tended to overlook in emphasizing the philosophical character of Dante’s poetry. 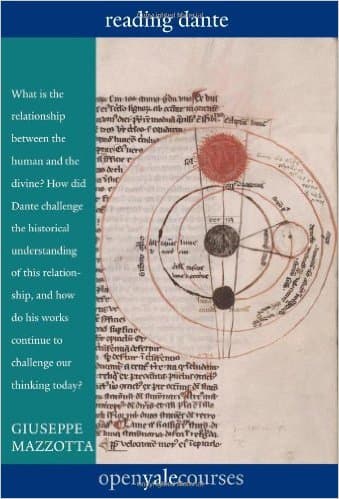 Based on Mazzotta’s Yale course, this book offers an introduction and a critical reading of The Divine Comedy. Professor Giuseppe Mazzotta situates the three parts of the poem - Inferno, Purgatory, Paradise - within the intellectual and social context of the late Middle Ages, with special attention paid to political, philosophical and theological concerns.

The Cambridge Companion to Dante by Rachel Jacoff (2007) 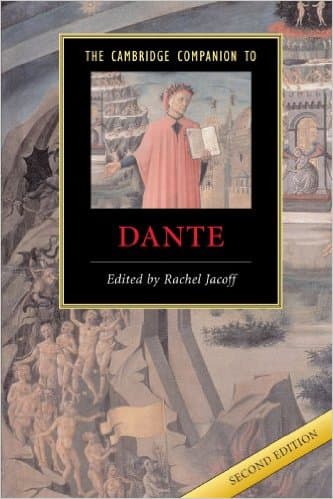 The Cambridge Companion to Dante is a collection of scholarly essays written by various academics, and it is particularly useful for those readers of Inferno and the complete Divine Comedy who want more information on specific allusions. The first three essays in this valuable textbook give the overall structure of the three parts of the Comedy: Hell (Inferno), Purgatory (Purgatorio), and Paradise (Paradiso), while the rest of the book serves as a guide to the literary, intellectual and historical background to Dante’s writings, his other works, and his reception.

Dante: Poet of the Secular World by Erich Auerbach (2007) 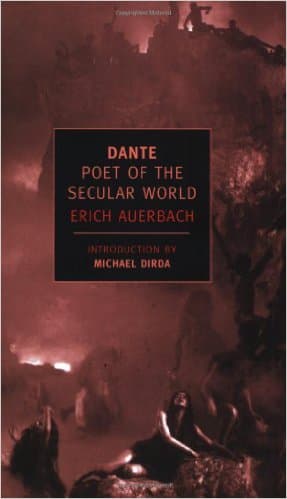 According to Auerbach, Dante was the first to describe “man … not as an abstract or anecdotal representative of an ethical type, but man as we know him in his living historical reality, the concrete individual in his unity and wholeness after Dante myth and legend also became history” (Auerbach). This particularly applies to Inferno, while in Paradise “the more universal and impersonal become the souls that appear”. One of the greatest scholar-critics of twentieth-century insists that Dante is our first great realist. In this classic study, he claims that the secular world of the modern novel ?rst took artistic form in the poetry of Dante.

The Metaphysics of Dante's Comedy by Christian Moevs (2008) 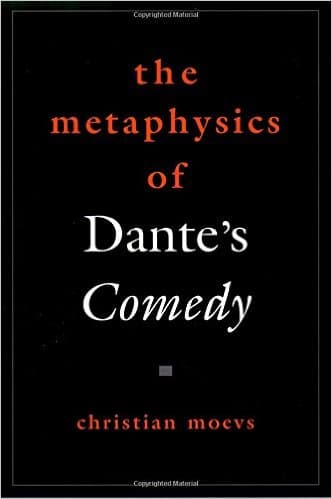 Considered by some as a dangerous book, Moevs’s study is elegantly clear prose that expresses the most complex ideas. Magnifying the mystical and metaphysical side of Dante, Moevs tries to resolve the central problem in the interpretation of the Comedy. While rejecting to present Dante’s ideas within the context of post-Enlightenment presuppositions, Moevs finds the key to the Comedy’s metaphysics and poetics in the concept of creation.

The Undivine Comedy by Teodolinda Barolini (1992) 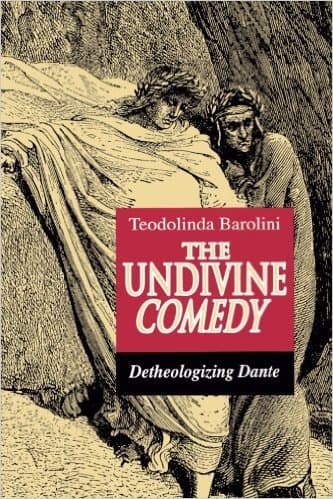 Through a “detheologized” reading of Inferno, Purgatory, and Paradise, Teodolinda Barolini focuses on the narrative techniques that enabled Dante to create an authentic work of fiction. She focuses on Ulyssean elements of his poetic journey, as well as on subjects such as the visionary and the poet, the One and the many, narrative and time.

Reading Dante: From Here to Eternity by Prue Shaw (2015) 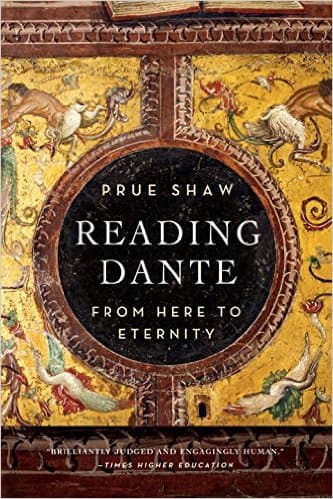 Just as accessible to a general reader as it would be a source of wonder to scholars, this book makes modern readers comfortable in Dante’s world. Having abandoned a chronological or teleological approach to Inferno and the Comedy, Shaw manages to dispel any reader’s cultural anxieties as well as prejudices one might have against Dante or medieval culture. In chapters on “Friendship”, “Power”, “Life”, “Love”, “Time”, and “Words”, this book shows us that Dante’s questions are the questions of our time too.

Farinata and Cavalcante from Mimesis: The Representation of Reality in Western Literature by Erich Auerbach (2003) 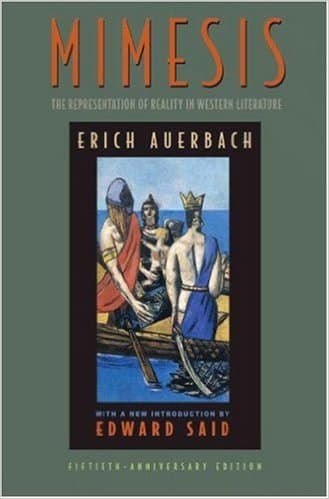 This classic study is the most influential reading of Dante’s Inferno and, at the same time, it is one of the great moments in modern critical literature, “a masterly … embodiment of Auerbach’s ideas about Dante: that the Divine Comedy synthesized the timeless and the historical because of Dante’s genius, and that Dante’s use of the demotic (or vulgar) Italian language in a sense enabled the creation of what we have come to call literature.” (Edward W. Said). Originally published in 1953, Auerbach’s Mimesis remains an irreplaceable source for any literature scholar in the world.