All of total 6 manned moon landings to date were a part of the NASA's Apollo program. Running from 1961 to 1972, the objective of the program was to gather as much data as possible from close orbits and manned landings, and of course, get to the Moon before the Soviets and take the lead in space exploration. Below is a list of all 6 manned moon landings with a brief summary of each of the missions. 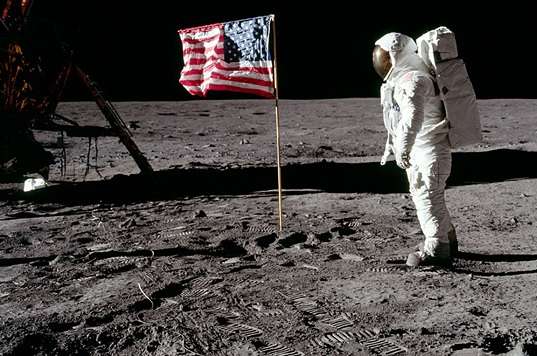 On July 20, 1969, the lunar module of Apollo 11 became the first manned spacecraft to land safely on the Moon in the area named Mare Tranquillitatis, commonly known as the Sea of Tranquility. The module was manned by Commander Neil Armstrong and pilot Edwin “Buzz” Aldrin. Upon landing, Armstrong called Houston base and reported “The Eagle has landed”. A few hours later, Armstrong stepped onto the surface and reported “that’s one small step for man, one giant leap for mankind”. Aldrin followed minutes later. After a stay of 21 hours and 36 minutes during which the astronauts took photographs, conducted experiments and collected samples of rock and soil, they lifted off. The lunar module then docked with the orbiting command module that was piloted by Michael Collins. On July 24, the craft splashed down safely in the Pacific Ocean. The astronauts were recovered by the U.S.S. Hornet. 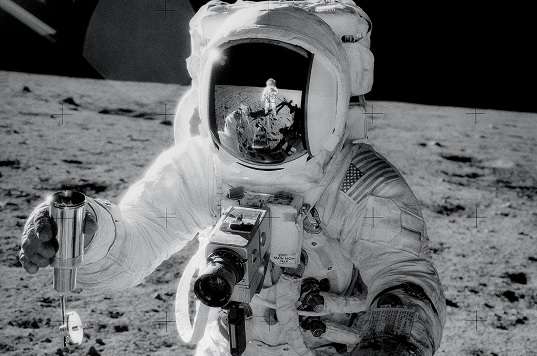 The second manned lunar landing took place on November 19, 1969. The lunar module of Apollo 12, crewed by Commander Charles Conrad and pilot Alan Bean, separated from the orbiting command module piloted by Richard Gordon. The two astronauts landed in the area called Oceanus Procellarum near Surveyor crater, and close to Surveyor 3, an unmanned spacecraft which had landed two and a half years earlier. The two men conducted experiments, took photographs and collected samples. Parts of Surveyor 3 were taken for later examination as well. After 31 hours and 31 minutes, they took off. After docking with the command module, the lunar module was jettisoned and crashed onto the Moon, causing the first recorded artificial moonquake. The astronauts splashed down safely near American Samoa and were recovered by the U.S.S. Hornet. 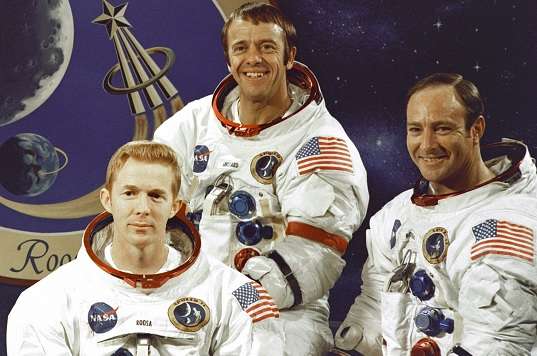 The third manned moon landing was made on February 5, 1971, by the lunar module of Apollo 14, crewed by Commander Alan Shepard and pilot Edgar Mitchell. They landed 13 miles (21 kilometers) north of the Fra Mauro crater. The astronauts collected samples, took photographs and conducted experiments, one of them being Shepard striking two golf balls. The lunar module lifted off on February 6, after 33 hours and 31 minutes spent on the Moon’s surface, to dock with the orbiting command module that was piloted by Stuart Roosa. On February 9, the crew splashed down in the Pacific Ocean, nearly 800 nautical miles south of American Samoa where they were recovered by the U.S.S. New Orleans. That was the last time recovered astronauts were quarantined. 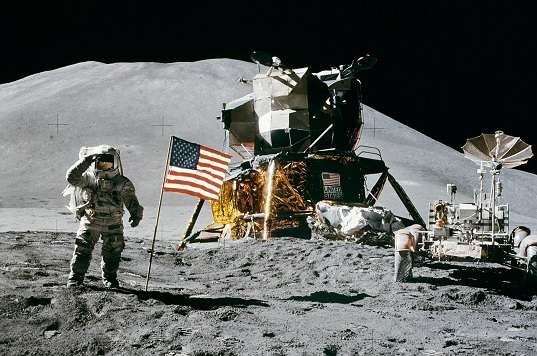 Apollo 15 was the fourth manned lunar landing which took place on July 30, 1971. After separating from the orbiting command module that was piloted by Alfred Worden, Commander David Scott and pilot James Irwin landed in the Mare Imbrium area, close to the Montes Apenninus. Scientific experiments were carried out, photographs taken and samples collected. The Lunar Rover was used for the first time, allowing the astronauts to explore a much larger area. After 66 hours and 55 minutes, the lunar module took off to dock with the command module. During the descent to Earth, one of the three parachutes didn’t open properly. Despite that, the craft splashed down safely 330 miles north of Honolulu. The astronauts were recovered by the U.S.S. Okinawa. 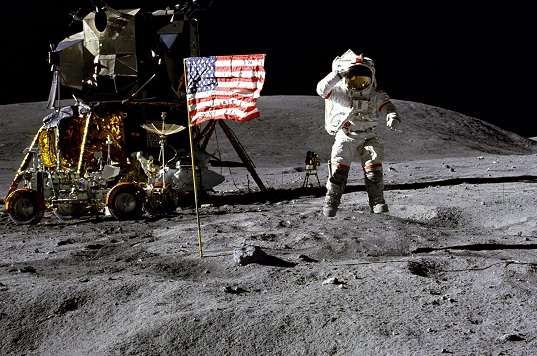 The fifth manned moon landing was made on April 21, 1972, by the lunar module of Apollo 16 that was commanded by John Young and piloted by Charles Duke. They landed in the Descartes area north of the Dolland crater, leaving pilot Thomas Mattingly in charge of the orbiting command module. The astronauts traveled 16.7 miles (27 kilometers) in the Lunar Rover vehicle, collecting samples and taking photographs as well as carrying out various experiments. On April 24, after a stay of 71 hours and 21 minutes, the lunar module lifted off and docked with the command module. On April 27, the crew splashed down some 200 miles southeast of Christmas Island where they were recovered by the U.S.S. Ticonderoga. 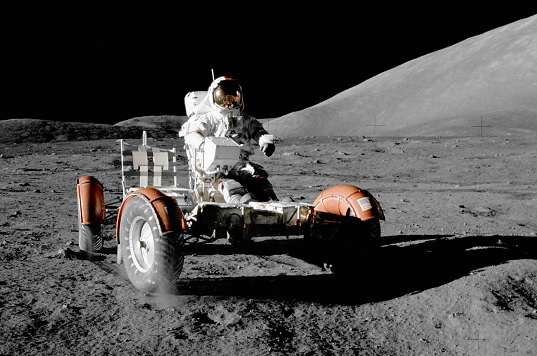 The last manned landing on the Moon to date, which took place on December 11, 1972, was made by Commander Eugene Cernan and lunar module pilot Harrison Schmitt who was also the first scientist on the Moon. Undocking from the command module piloted by Ronald Evans, Schmitt guided the spacecraft to land in the valley of Taurus Littrow, close to the southeastern edge of the Mare Serenitatis crater. They used a Lunar Rover vehicle to travel 18.6 miles (30 kilometers), collecting samples, taking photographs and conducting experiments. On December 14, after a 75-hour long stay, they lifted off and docked with the command module. On December 19, the astronauts successfully splashed down southeast of the Samoan Islands where they were recovered by the U.S.S. Ticonderoga.