Scientists estimate that over 500 million species have died out throughout evolution, representing over 99.9 percent of all species ever produced. This list does not contain extinct animals from prehistoric times (dinosaurs, mammoth and the like) but only those that died out since the 1800s and are relatively prominent. Most were eradicated directly (hunting) or indirectly (habitat destruction, import or introduction of alien species) by humans. 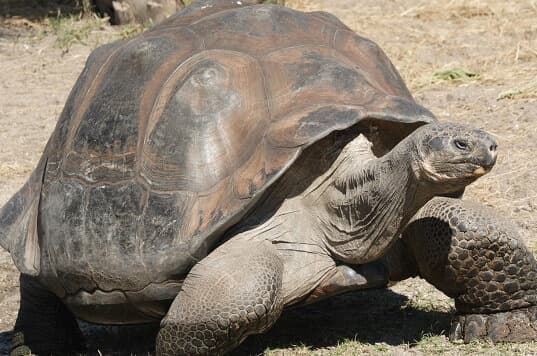 The giant tortoise of Pinta was a giant tortoise that had a shell the shape of a saddle, which favored the elongation of the neck upwards to feed on leaves present at a certain height from the ground. They lived endemically on the island Pinta of the Galapagos Islands, Ecuador. It is one of the ten species of giant tortoises native to that archipelago. By the end of the nineteenth century, most of the Pinta Island tortoises had been wiped out due to hunting. The last known individual was a male named Lonesome George who died on 24 June 2012. In his later years, he was considered the rarest animal in the world. 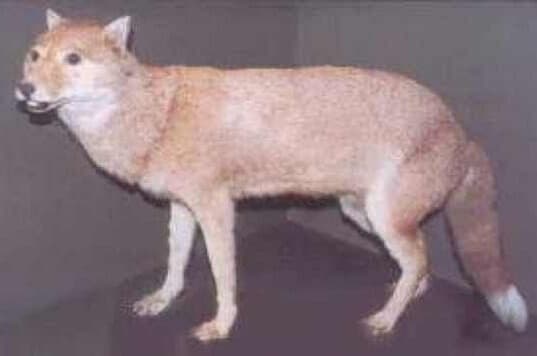 The Falkland Islands Wolf was the only native land mammal of the Falkland Islands. It is the only species of canine to have disappeared in historical times, and the last known specimen died in 1876 on the western island of the archipelago. The animal was hunted for his beautiful fur, and the shepherds, considering it a threat to the sheep, poisoned him. On the islands, there were no forests in which the species could take refuge, and its lack of fear towards man made it easy prey to kill. A live specimen was brought to London Zoo in 1868 and another in 1870. Neither of them survived long. 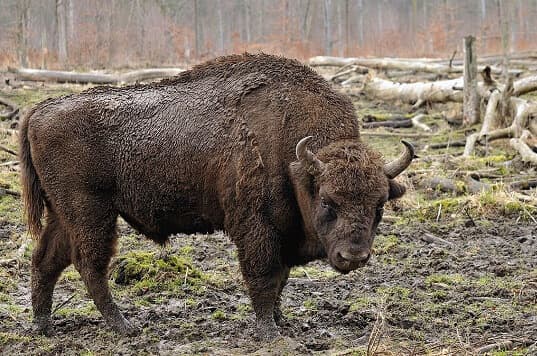 The Caucasian wisent which went extinct in 1926 (according to other data 1927) inhabited the Caucasus mountains, an intersection of Europe and Asia. They were a subspecies of the European bison, but their coats covered the body only leaving the front frame; also the mane was shorter. In 1910 their numbers were estimated in the hundreds. When state authority collapsed after the First World War and during the Revolution, the remaining population fell victim to poachers. The decline can also be contributed to an outbreak of foot-and-mouth disease that was introduced with cattle. 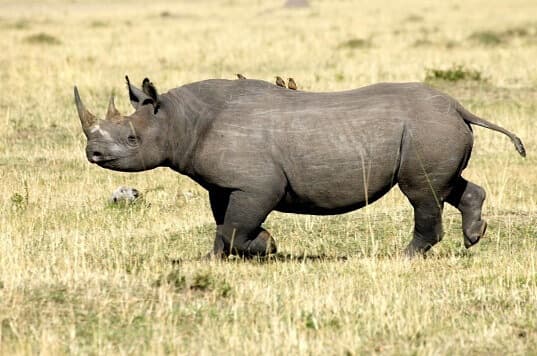 The western black rhinoceros was once widespread in the savannah of central-western Africa, but the population decreased because of poaching making them the rarest subspecies of black rhino. Until 2006, when an intensive study of northern Cameroon (the last habitat of this subspecies) did not find any specimen, but efforts to locate an example continued until 2011 when it was declared extinct after five years without any sighting. Widespread poaching and the insufficiency of the courts when issuing sentences to punish poachers contributed to the disappearance of the subspecies. 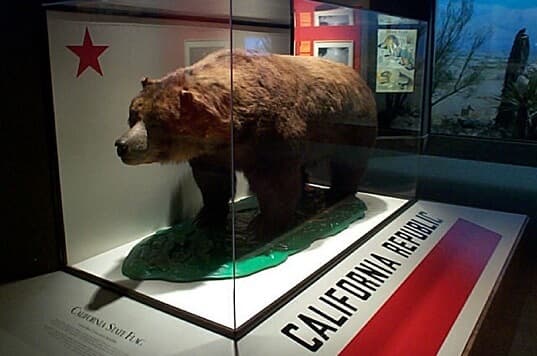 The California Grizzly was a subspecies of the brown bear native to North America. It is the official animal of the state of California and appears on its flag but disappeared in 1922 when the last specimen was shot in Tulare County. The California grizzly stood out from the grizzly for a slightly darker fur, a black spot on the forehead and the absence of the hump on the back. Nineteenth-century testimonies describe the Californian grizzly as an animal endowed with superhuman strength and aggressive temperament, therefore to be hunted, this may have been the reason for its extinction. 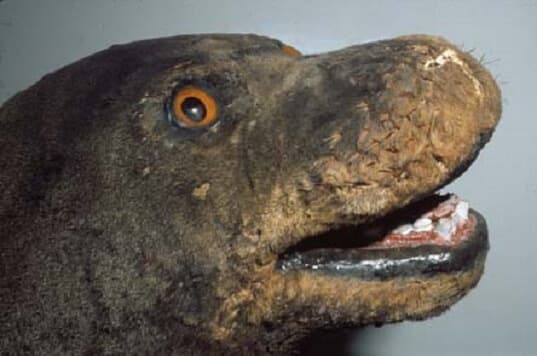 The Caribbean monk seal was the only seal that lived in clear tropical waters; they inhabited the waters of Florida to the coastal areas of Texas, the Great and Lesser Antilles, and the Yucatan Peninsula. Reports of visual sightings by divers still occur sporadically, but several systematic attempts to rediscover this animal have been unsuccessful. This species was listed on its 1994 Extinct List of Extinct Species by IUCN (International Union for the Conservation of Nature). The National Oceanic and Atmospheric Administration (NOAA) classified it as extinct in 2008, after five years of unsuccessful research. 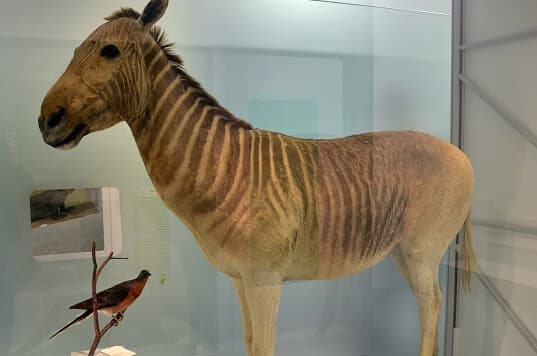 The quagga is an extinct subspecies of the plains zebra that lived in the driest parts of South Africa, in the grassy plains. It distinguished itself from all other zebras because it had the characteristic black stripes only on the neck and front of the body. Humans extirpated the quagga at the end of the nineteenth century when the animals were hunted for meat and leather. South Africa was also among members of the financially well-off upper class as a hunting paradise, which killed many animals for “sport.” The last quagga died at the Amsterdam Zoo in 1883. 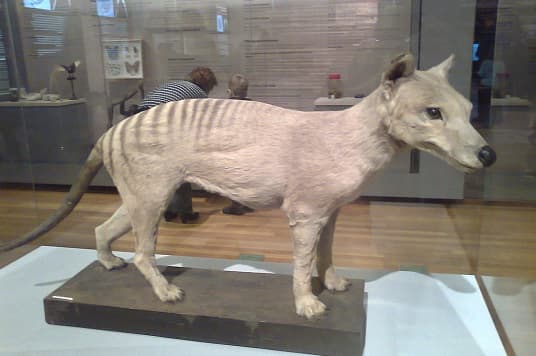 The thylacine more commonly known as the Tasmanian Tiger was a carnivorous marsupial mammal that lived in Australia, New Guinea, and Tasmania. The last known specimen died in 1936 at the Hobart Zoo in Tasmania. The Tiger was very scarce in the continent even before the arrival of the European settlers, but their extinction can be attributed to intense hunting as they were considered a pest for livestock and hunted by settlers, combined with the alteration of its habitat due to deforestation and the introduction of dogs. 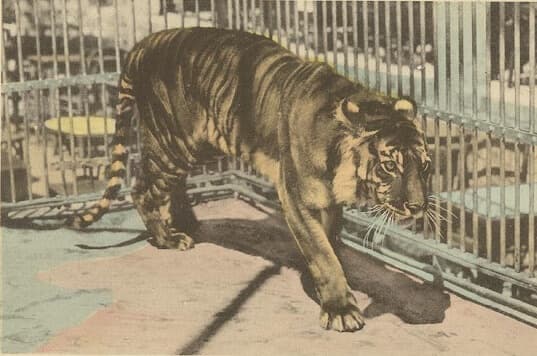 The Javan tiger is an extinct subspecies of the tiger that was native to the Indonesian island of Java until it was declared extinct. Compared to the Bengal tiger and the Siberian tiger, the Javanese racers were small and characterized by fine stripes and a narrow snout with long carnassials. Very little data was gathered about their behavior before they were driven to extinction. When Java was deforested for rice fields by 1975, only 8% of the forests remained. The rarefaction of its two main prey species, the red deer and the wild boar, and the modification of its habitat led to the extinction of the subspecies in the 1980s. 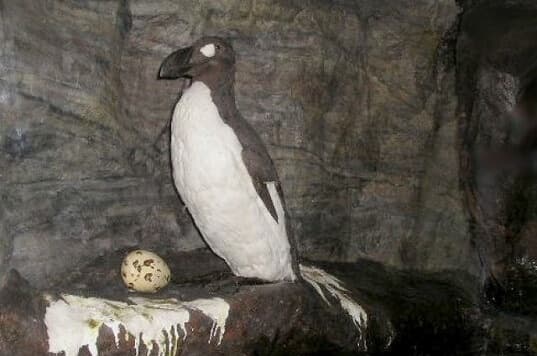 The great auk was a flightless seabird from the Alcidae family and is the only species of this family that has died out in historical times. He lived on the edge of the Atlantic Ocean. Its main predators included killer whales, white-tailed eagles, polar bears and humans who hunted the great auk for more than 100,000 years. When scientists realized how much their population was threatened, various laws were promulgated to try to save that bird, but they proved insufficient. Its growing rarity attracted the greed of museums and private collectors who sought eggs and penguin skins. The last reliable sighting of this species took place in 1852.