French Impressionist painter Claude Monet (1840-1926) painted his famous Water Lilies series from the 1890s until his death in 1926. The scene of all was a water lily garden he had created near his home in Giverny. In total, he painted some 250 Water Lilies which are today the highlights of art museums throughout the world. Occasionally, individual paintings from private collections appear on the market. In June 2014, one was sold at Sotheby's in London for nearly £32 million ($54 million). Below is a list of 10 Claude Monet's Water Lilies which can be admired in some of the world's finest art museums and galleries.

Reflections of Clouds on the Water-Lily Pond (c. 1920)

The Reflections of Clouds on the Water-Lily Pond is a 78.74 x 167.244 in (200 × 424.8 cm) oil on canvas triptych which was completed approximately in 1920. It is housed in the Museum of Modern Art (MoMA), New York City, which acquired it in 1959 from the painter’s son as a replacement for two Water Lilies paintings that were destroyed by a fire one year earlier. 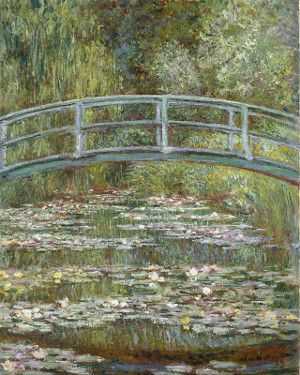 Also referred to as the Japanese Bridge, the Bridge over a Pond of Water Lilies is featuring a Japanese-style footbridge over the painter’s water lily garden in Giverny. Painted in 1899, the 36.5 x 29 in (92.7 x 73.7 cm) painting is owned by the Metropolitan Museum of Art, New York City, which acquired it in 1929 as a bequest from Mrs. H. O. Haverneyer. 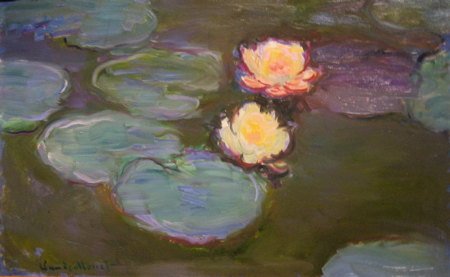 Titled the Nympheas (French for Water Lilies), the 26 x 41 in (66.04 x 104.14 cm) oil on canvas is one of the earliest Water Lilies paintings. Painted c. 1897-1899, the masterpiece is owned by the Los Angeles County Museum of Art which acquired it as a bequest from Mrs. Fred Hathaway Bixby. 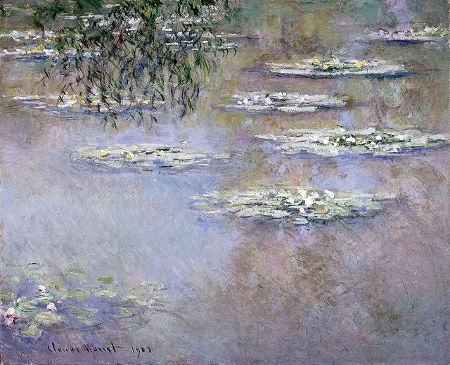 Painted by Claude Monet with oil on canvas in 1903 as indicated in the left corner, this Water Lilies painting is considered one of the finest from his lily series. The masterpiece is owned by the Dayton Art Institute (Ohio) and is a part of the Art Institute’s permanent collection but it is occasionally also loaned to other art museums and galleries. 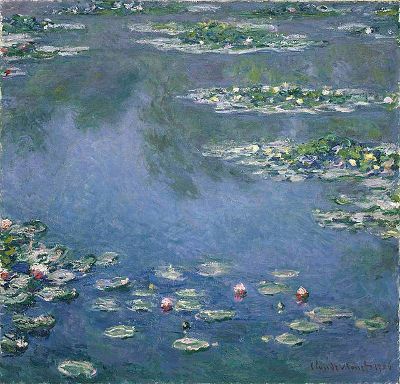 Reminiscent of other Monet’s paintings from the lily series, this 35.4 x 37 in (89.9 x 94.1 cm) oil on canvas nevertheless stands out from the rest due to the painter’s exceptional attention to detail and the effect of light and shadow on the color. Completed in 1906, the painting is since 1933 owned by the Art Institute of Chicago when it was donated to the Institute by Mr. and Mrs. Martin A. Ryerson. 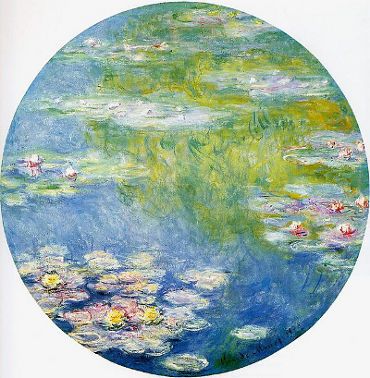 Donated to the Dallas Museum of Arts by the Meadows Foundation Incorporated, this oil on canvas is one of only a few circular Water Lilies. Painted in 1908, the artwork with a diameter of 31.5 in (80 cm) is displayed in the European Painting and Sculpture Galleries and is one of the museum’s greatest treasures. 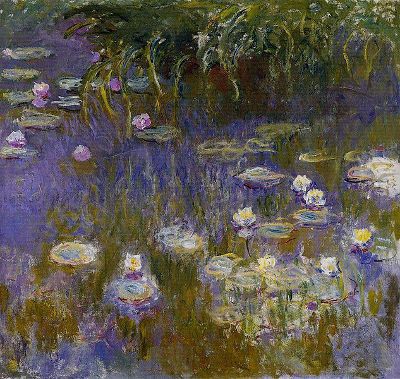 This water lily masterpiece was painted around 1922. Like many other paintings in the series, it too is simply titled Water Lilies and depicts the blossoming water lilies in the painter’s pond in Giverny. The 79 x 84 in (200.7 x 213.3 cm) oil on canvas is on display in the Toledo Museum of Art (Ohio) that bought it with funds from the Libbey Endowment. Upon his death in 1925, the founder and first president of the museum Edward Libbey left the art museum $1 million endowment fund. 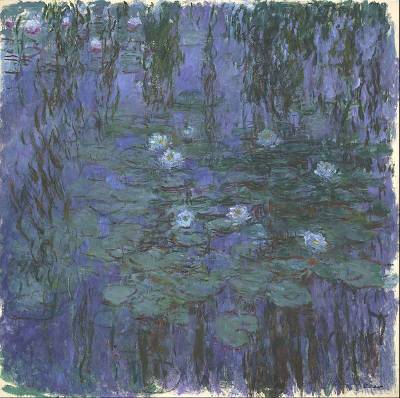 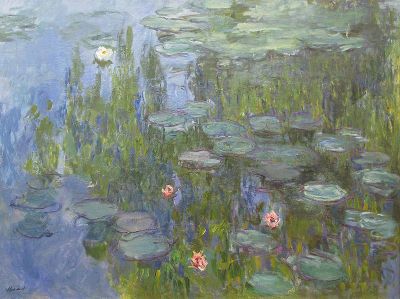 This 59.6 x 79.1 in (151.4 x 201 cm) oil on canvas is among the greatest treasures of the Neue Pinakothek (Munich), one of the most preeminent museums of the 19th century art in the world. Painted in 1915, the masterpiece was acquired for the museum’s art collection by purchase in 1978.

Painted between 1914 and 1926, the Water Lilies – Setting Sun is owned by the Musee de l’Orangerie, an art museum of Impressionist and Post-Impressionist era paintings in Paris which is home to eight paintings from the lily series. They are displayed in two oval rooms that were built in the 1920s and opened to the public less than six months after the painter’s death.