Thirty foot wide stained glass window was made by Louis Comfort Tiffany’s Glass Company in 1889-90. It was installed at the Yale University’s new library that was built in memory of Mary Harwell Lusk, a daughter of the University’s patron Simon Baldwin Chittenden. Tiffany’s Education was removed in 1970 as a safety precaution before the protests in New Haven Green. It then misidentified and forgotten for a number of years. And it was the misidentification which is thought to save the masterpiece because stained glass that has been mistakenly labeled as Tiffany meanwhile disappeared from the University’s basement. 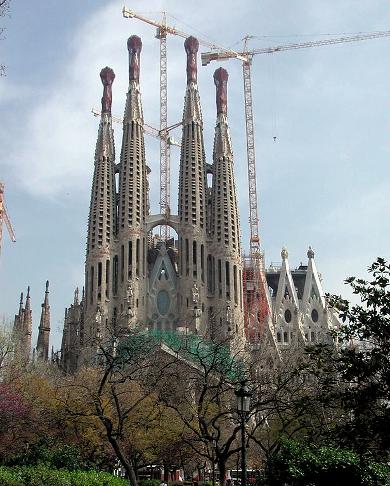 Officially named Basilica I Temple Expiatori de la Sagrada Familia is the finest creation of the renowned Catalan architect Antoni Gaudi. The architect devoted over four decades to the church but at the time of his death in 1926, the spectacular building remained uncompleted. In fact, it is scheduled to be completed only in 2026, on the 100th anniversary of Gaudi’s death. But despite the fact that it is not finished, the Sagrada Familia is an UNESCO World Heritage Site since 1984 and Barcelona’s prime tourist attraction for decades.

Lithograph poster by the celebrated Czech Art Nouveau artist reveals Mucha’s distinct style which had a major influence on Art Nouveau movement. The 216 x 74.5 cm poster was created in 1894 for the Victorien Sardou’s play Gismonda featuring Sarah Bernhardt. She is depicted on the poster wearing a costume from the last, fourth act of the play. Mucha’s Gismonda can be seen as a part of the exhibition Alphonse Mucha: An Insight into the Artist in Tokyo, Japan, from early March 2013.

The Kiss by Gustav Klimt 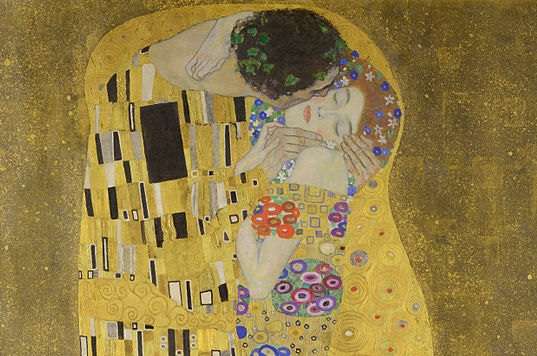 The painting marks the height of the artist’s “golden period”. Klimt painted one of his greatest masterpieces between 1907 and 1908, using the traditional oil paint and gold leaf layers. But despite the spectacular depiction, the only features are virtually the faces and hands of the two lovers who are kissing on the edge of a cliff. The painting is owned by the Österreichische Galerie Belvedere in Vienna, Austria, where it is currently featured in a special exhibition in honor of the 150th anniversary of Klimt’s birth. 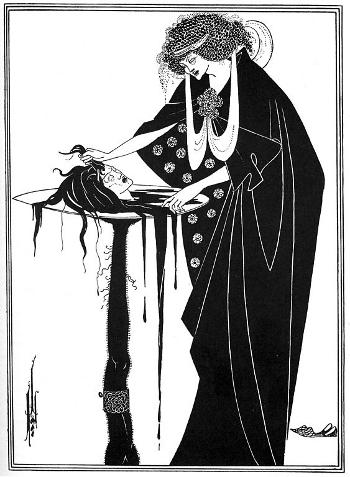 The illustration for Oscar Wilde’s play Salome depicts Salome with the head of John the Baptist and justifies Beardsley’s reputation as one of the most controversial artists of the Art Nouveau movement. His black ink drawings were dominated by dark themes and grotesque erotica featuring large genitalia, especially those that have been inspired by Japanese shunga. Nevertheless, he had a major influence on other Art Nouveau artists of his era as well as many later artists. 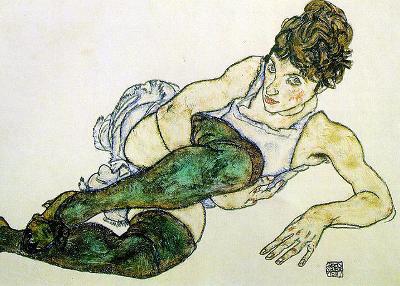 The painting that was created in 1917, one year before the artist’s death belongs to the classics of the so-called Schile’s women. It emphasizes female sexuality in both appealing and controversial way. His style that also includes elements of Expressionism caused a lot of controversy and even got him in trouble. In 1912, he was imprisoned for his sexual portrays of very young female models that were viewed as obscene. Schiele’s Reclining Woman with Green Stockings is in private collection.

At the Moulin Rouge by Henri de Toulouse-Lautrec 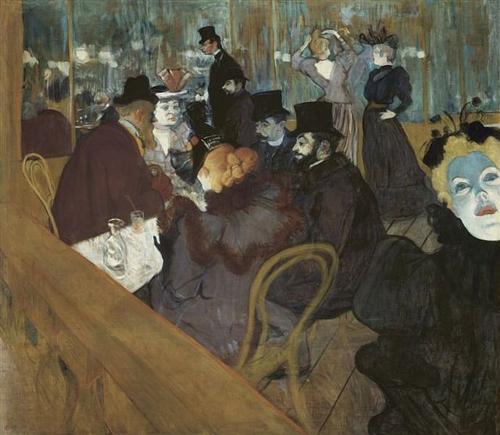 The oil-on-canvas painting depicts the Moulin Rouge cabaret that opened in 1889. The painting portraits three men and two women sitting at a table, the artist himself with his cousin and physician Gabriel Tapie de Celeyran in the background, the French can-can dancer La Goulue in the background and English singer May Milton in the foreground. The section that shows the singer’s face was at some point removed from the rest of the painting either by Lautrec or his dealer but it was later reattached. The painting that was created between 1892 and 1895 is a part of the collection of the Art Institute of Chicago.