Henri Matisse (1869-1954), one of the most admired and respected French artists of the 20th century was the foremost figure of Fauvism, a style of painting that emerged in the early 20th century France. Adopted by a small group of artists (next to Matisse, some of the best known Fauvists include André Derain, Raoul Dufy, Maurice de Vlaminck and George Braque, to mention a few), Fauvism was an extremely short-lived but as it would turn out later, very influential art movement. The same goes for Matisse who is widely considered as one of the leading figures of modern art. Also a brilliant sculptor and printmaker, the French artist is nevertheless most famous as a painter. Listed below are only 12 of many outstanding paintings by Henri Matisse:

The Dessert: Harmony in Red 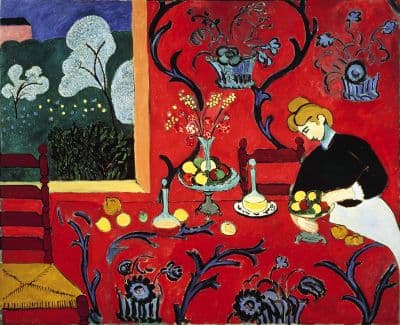 The Dessert: Harmony in Red (French original: “La Desserte rouge”), also known as The Red Room was painted in 1908, at the height of Matisse’s Fauvist period. Interestingly, the Russian businessman and art collector Sergei Shchukin (1854-1936) commissioned it as “Harmony in Blue”. However, the artist changed it into red because he didn’t like the original blue version. The painting is besides its distinctively Fauvist style also characterized by lacking the central focal point which reveals the influence of Impressionist painting. Like many other artworks from Shchukin’s art collection, The Red Room is now displayed in the Hermitage Museum in St. Petersburg.

Notre-Dame, une fin d'après-midi ("A Glimpse of Notre-Dame in the Late Afternoon") 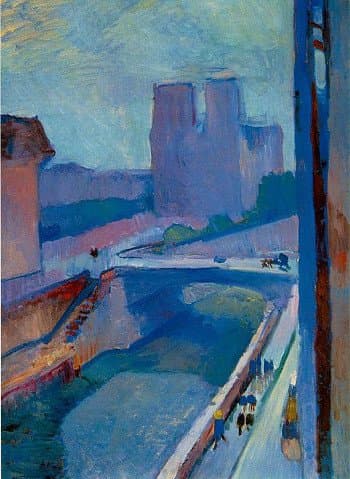 Painted in 1902, the Notre-Dame, une fin d’après-midi (English: “A Glimpse of Notre-Dame in the Late Afternoon”) is a painting from Matisse’s “pre-Fauvism” period. It was actually created during what is known as the Matisse’s Dark Period which was marked by the preference of dark colors. Between 1901 and 1903, the artist was going through a tough period due to a financial scandal involving his wife’s family and his personal problems showed on his work. The painting which depicts a view of the Notre Dame Cathedral in Paris is today a part of the collection of the Albright-Knox Art Gallery in Buffalo, New York. 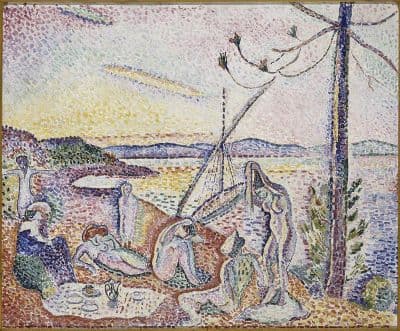 Another masterpiece from Matisse’s early period, the painting Luxe, Calm et Volupté (English: “Luxury, Calm and Pleasure”) is notable for employing the so-called Divisionist technique which was very popular with Neo-Impressionist painters. However, it also includes distinctively Fauvist elements which is why it is often cited as the early example of Fauvism. The painting’s style is thought to be influenced by the French Painter Paul Signac (1863-1935) who was vacationing with Matisse in St. Tropez on the French Riviera in 1904 when he created the painting. The latter is today housed in the Musée d’Orsay in Paris.

Woman with a Hat 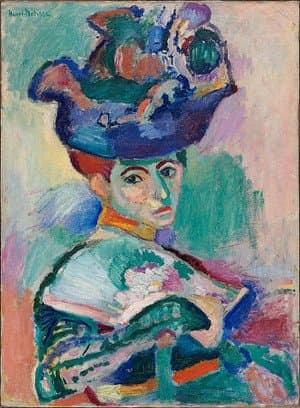 Without a doubt one of Matisse’s most famous paintings, Woman with a Hat (French original: “La femme au chapeau) is also one of the finest examples of Fauvism. Created in 1905, the painting was displayed in the same year at Salon d’Automne along with works by Vlaminck, Derain and other artists whom art critic Louis Vauxcelles (1870-1943) pejoratively called fauves (English: “wild beasts”). Ironically, the term later came to be used to describe their style of painting - Fauvism. Woman with a Hat which depicts the artist’s wife Amelie is today housed in the San Francisco Museum of Modern Art. 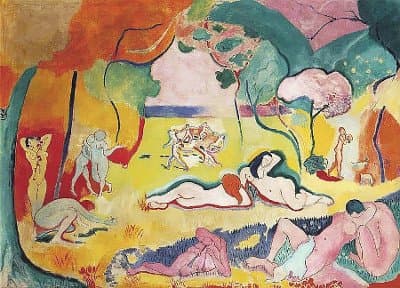 Though causing a lot of controversy and outcry when first exhibited in 1906, Le bonheur de vivre or “The Joy of Life” in English translation is viewed not only as one of the greatest masterpieces of Fauvism but is also considered as one of the defining works of Modernism. Depicting a group of nude people - both men and women - in a landscape, the painting is characterized by the use of vivid colors and flattened space, both of which created massive shockwaves. But they also inspired many Matisse’s contemporary artists including Pablo Picasso who is thought to be under a major influence of “The Joy of Life” when creating one of his greatest works - Les Demoiselles d’Avignon. Matisse’s masterpiece is today in the art collection of the Barnes Foundation in Philadelphia. 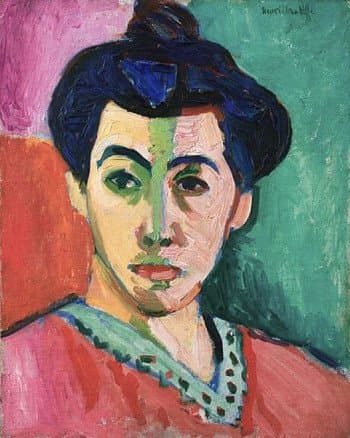 The Green Stripe (French original: “La Raie Verte”), also called the Portrait of Madame Matisse is a portrait of the artist’s wife Amelie. The painting is notable for lacking the use of light and shadow to add depth and create the illusion of a third dimension. However, the same effect is created by a brilliant use of colors. The painting which was created in 1905 was named after the green stripe in the middle of Amelie’s face which serves as the shadow line. It can today be admired at the National Gallery of Denmark in the Danish capital of Copenhagen. 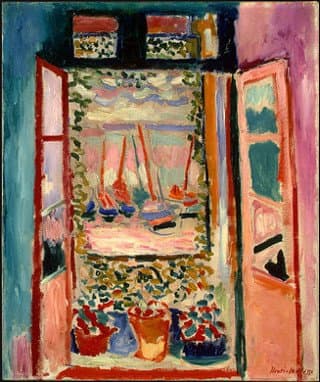 Matisse had a particular liking for the theme of open window and he produced a number of paintings on the theme. The most famous and admired, titled simply The Open Window (sometimes also referred to as Open Window, Collioure) was painted in 1905 in a small coastal town of Collioure. Depicting the view of the fishing port as seen from the artist’s department, the painting was first exhibited at the Salon d’Automne in 1905. Since 1998, it can be seen at the National Gallery of Art in Washington D.C. The latter acquired it in the same year by bequest from Mrs. John Hay Whitney. 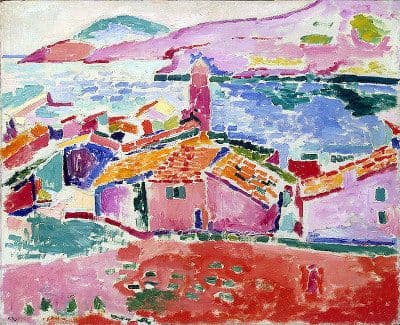 Les toits de Collioure (English: “The Roofs of Collioure”) is another outstanding Matisse’s painting that was created in Collioure while he stayed there with his fellow artist André Derain. He traveled to the small town in southern France in summer of 1905 to find inspiration for work. And he did; even more, he created some of his most celebrated paintings while staying at Collioure. This painting depicts the coastal town and the surrounding landscape in a style typical for his early Fauvist period, involving a highly liberal use of vivid and “wild” colors. It is now housed in the Hermitage Museum in St. Petersburg, Russia. 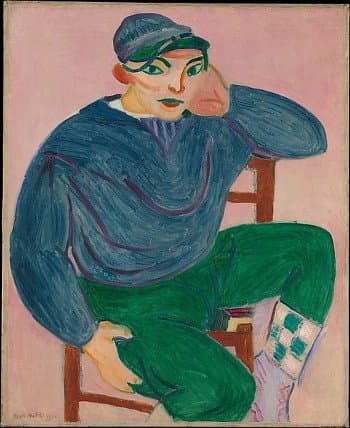 The Young Sailor II (French original: “Jeune Marin”) is the second version of a painting that was created during Matisse’s stay at Collioure in 1905. Just like the original, this version depicts an 18-year-old fisherman Germain Augustin Barthélémy Montargès from Collioure but in a pronouncedly Fauvist manner. The painting which was created in 1906 can be admired in the Metropolitan Museum of Art in New York City which acquired it as a donation in 1998, while the “first” Young Sailor remains in private collection. 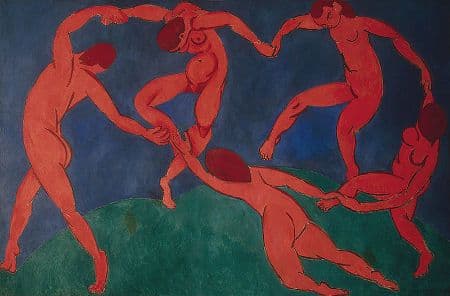 One of Matisse’s most important works and one of the central pieces of modern art, the Dance (French original: “La Danse”) is another masterpiece that was created for the Russian art collector Sergei Shchukin in 1910. The second version of a painting commonly referred to as Dance (I), which was created one year earlier as a preliminary work, depicts five nudes dancing in a circle as well. But they are painted in an intensively red color to create a greater contrast with the blue sky and green landscape - the same as the figures in its companion painting Music. Just like the later, the Dance is now in collection of the Hermitage Museum in St. Petersburg. 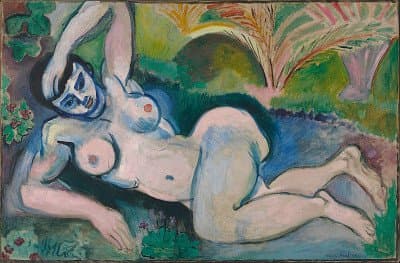 This controversial oil painting was finished in 1907. As indicated by the title, the Blue Nude (Souvenir de Biskra) (French: “Nu bleu, Souvenir de Biskra”) depicts a nude woman with shades of blue highlighting her figure. However, it wasn’t the use of blue color that made it one of the most controversial paintings of its time but rather the artist’s unconventional representation of the woman’s figure. It caused such an outrage that it was even burned in effigy when displayed at the 1913 Armory Show in Chicago. The painting which was inspired by a shattered sculpture is today on display at the Baltimore Museum of Art. 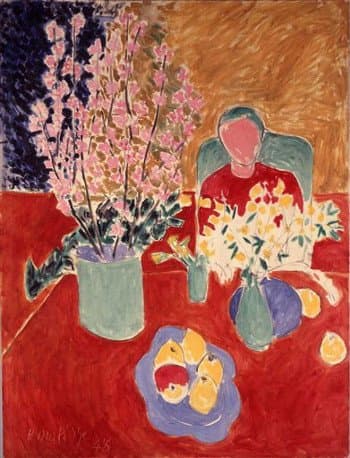 The Plum Blossoms (French: “Prunier en fleurs”) is one of the last Matisse’s paintings as in 1950, the artist gave up painting and focused on paper cutouts. Depicting a faceless woman sitting at the table featuring multiple vases with flowers and a fruit bowl, the painting forms a collection of 7 paintings known as the “Vence interiors”. These were created in Matisse’s studio in the town of Vence in south France between 1947 and 1948. Until acquired by the MoMA in 2005, The Plum Blossoms hasn’t been seen since 1970 when it was displayed at an art exhibition in Paris. In the same year, it was sold to a private collector and remained largely unknown to the public until bought by Mr. and Mrs. Kravis who donated to the MoMA.