Gustave Dore (Paul Gustave Louis Christophe Doré, 6 January 1832 - 23 January 1883) was a world-renowned French artist, illustrator, and sculptor, specialized in wood engravings. Today, Gustave Dore is best known for his illustrations of Dante's The Divine Comedy. Now it may seem unbelievable, but this magnificent work was originally self-published. Dore couldn't find a publisher who was willing to take a financial risk on the extravagant edition he imagined. He decided to take the risk himself and publish this amazing artwork in 1861. The illustrations of The Divine Comedy became an instant success. Now, the century and a half later, these images still provoke our deepest reactions. This is a hand-picked list of Gustave Dore's illustrations that show us the most interesting and exciting episodes of Inferno.

Virgil pushes Filippo Argenti back into the River Styx 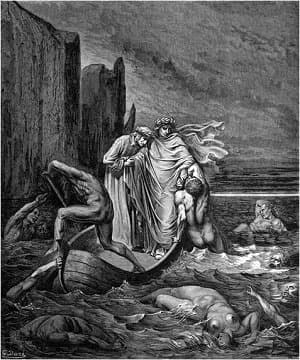 This illustration depicts a disturbing moment from Canto 8 when Dante and Virgil encounter one of the sinners they despise the most. Wandering around the Fifth Circle of Hell, Virgil and Dante meet the boatman Phlegyas, who takes them across the Styx at Virgil’s request. On the way, they stumble upon a sinner called Filippo Argenti. Dante recognizes him and, instead of feeling pity, curses him. When the sinner tries to get to the boat, Virgil pushes him back into the river. Both Dante and Virgil feel righteous. They have no sympathy for Argenti and eagerly watch the other sinners attack him as they go away. Virgil feels proud of Dante and so he hugs and kisses him. 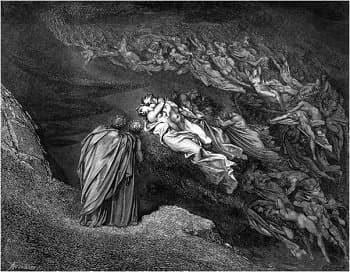 The poignant story about forbidden love between these young people makes the central theme of the Canto 5 which describes Dante’s and Virgil’s journey through the Second Circle of Hell, where they encounter the souls of the Lustful, like Semiramis, Dido, Cleopatra, Helen of Troy, Paris, Tristan… Dante feels compassion for the souls that are damned by love and wants to speak with them. One of the punished women, Francesca, answers him and tells her story. She was forced into a loveless marriage with an old man. She eventually fell in love with her husband’s younger brother, Paolo. Once they sat together reading an Arthurian tale about the love of Lancelot and Guinevere and they began to notice the existence of their own secret love. They shared a kiss, her husband found out immediately and killed them. This story seems to be too disturbing for Dante, and he faints. 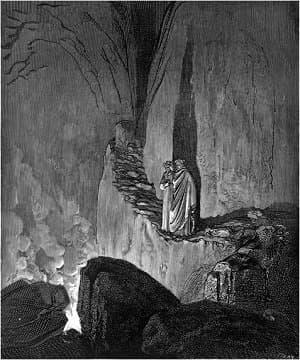 Virgil and Dante are walking through the Eighth Ring of the Eighth Circle of Hell, where they encounter numerous flames shivering in a deep, obscure valley. As they approach nearer, Virgil explains that each flame has a sinner in it. Dante notices two souls contained together in one flame: Ulysses and Diomedes. They are both facing consequences of the fraud they committed during the Trojan War. During this episode, Ulysses tells them about his death. In one of his numerous adventures, he sailed beyond the rim of the world, which was the western edge of the Mediterranean. An old legend says that death awaits anyone who dares going beyond that point. After five months, a huge storm arose and sank his ship.

Dante and Virgil before Farinata 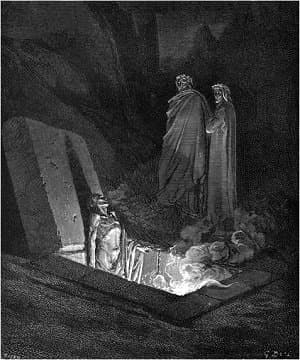 In the Sixth Circle of Hell, Dante and Virgil walk between the burning tombs of the Heretics. The lids of the tombs are open. As they approach the group of the Epicureans, a voice from one of the tombs calls Dante because the sinner has noticed his Tuscan accent. The voice belongs to Farinata, a powerful political figure of Dante’s time. Farinata was a leader of the Ghibelline party, the sworn enemy of Dante’s Guelph party. 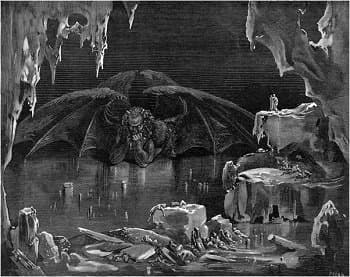 At the very center of Hell, Dante and Virgil see the arch-sinner, Lucifer or Dis, who is frozen mid-breast and surrounded by fog. His wings are still free to move and they produce a cold wind that continuously freezes the ice around him, as well as the other sinners. This place is known as Judecca. It is placed in the fourth ring of the Ninth circle, which is reserved for the worst sinners, the betrayers to their benefactors.

Lucifer is a giant with three heads, three horrible faces of different colors, and six eyes that are crying. It is even more interesting to see what is inside of his three mouths. In each of these, there is a sinner. The mouth in the center chews Judas Iscariot, the traitor to Jesus Christ. The other two mouths chew Brutus and Cassius, the betrayers and murderers who killed Julius Caesar. Lucifer’s mouths are eternally tearing the sinners to pieces, without completely killing them. This image is ultimately horrifying and even Dante remains speechless in the presence of Lucifer, the greatest sinner of all and the one who suffers the most.

Titans and other giants 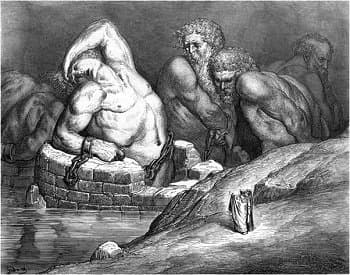 As they approach the pit in the center of the Eighth Circle of Hell, Dante sees something that looks like a city with tall towers in the mist. However, these towers are actually alive - they are giants. The upper parts of their bodies are at the same level with the Eighth Circle, but their feet are at the bottom of Hell - in the Ninth Circle.

The first giant they stumble upon is Nimrod. He was a king of Babylon who caused the confusion of different languages in the world by making the Tower of Babel. Next, they meet Ephialtes, a giant who took up arms against the gods. As a result, his arms are now immobilized, but he is still scary. Trying to get out of his chains, he shakes himself, which causes an earthquake. Finally, Dante and Virgil meet Antaeus, who picks them up and helps them get to the next, Ninth Circle of Hell.

Minos, judge of the damned 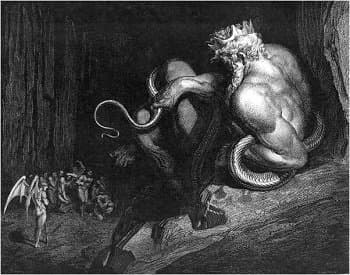 At the entrance of the Second Circle of Hell, there is Minos, once the first king of Crete, and now the monster that stands before an endless line of sinners, judging them and picking appropriate punishments. The souls confess their sins to Minos, who then twines his enormous tail into coils around himself, demonstrating the number of the circle to which the soul must go. He warns Dante and Virgil to be cautious, and then they move on.

Charon, ferryman of the dead 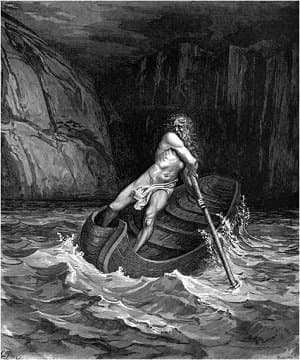 From the banks of the mythological river Acheron, which marks the border of Hell, Virgil and Dante see a boat that approaches. The old man inside is Charon, the ferryman that takes the souls of the death across the river. At first, he refuses to take the living passengers to the other side, but Virgil informs him that their journey is important and that they have a permission from above to visit Hell. They are already half the way across the river and Virgil finally explains Dante why Charon refused to take them at first: only damned souls can cross Acheron. This knowledge, as well as a sudden earthquake, makes Dante so frightened that he faints. 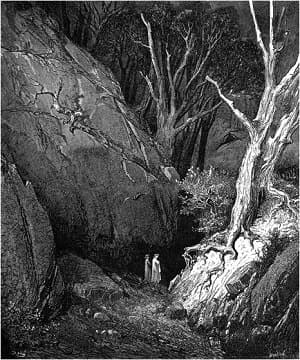 At the beginning of Inferno, Dante finds himself lost and frightened in a dark wood. A divine woman, Dante’s beloved Beatrice, notices him and sends Virgil to guide him. Their journey will take them through the circles of Hell and that they will eventually reach Heaven. The dark wood is an allegory. It symbolizes man’s straying from the virtue. Dante appears to have abandoned the rightful and straight path of moral truth. That’s why he gets lost in the dark wood at the first place.

Spendthrifts running through the wood of the suicides 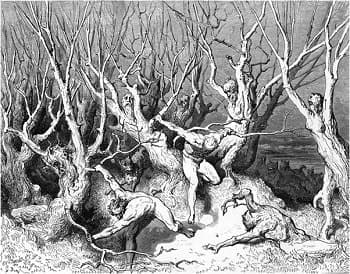 The Second Ring of the Seventh Circle of Hell is the Wood of the Suicides, in which the souls of the Suicides are altered into twisted, thorny trees, surrounded by Harpies. After one of the trees finishes the story of his life and suicide that caused his present, painful state, Dante notices two shades (Lano da Siena and Jacopo Sant’ Andrea) run through the wood, pursued by ferocious dogs. This is the punishment of the spendthrifts who wasted their goods to satisfy their lowest needs. As they race through the wood, they additionally hurt the suicides and produce further suffering.