The Early Italian Renaissance art refers to an artistic movement that started in Florence and other rich north Italian cities in the early 15th century and marked the beginning of a major cultural change in Europe. The Early Italian Renaissance artists began to show an increased interest in the beauty of the nature and human body as portrayed in classical antiquity. But they did not break with Gothic art completely. They did, however, set the stage for the widespread of the Renaissance movement in the late 15th century that ended the transition from the "dark and backward" Middle Ages to the Early Modern Period.

Gates of Paradise by Lorenzo Ghiberti 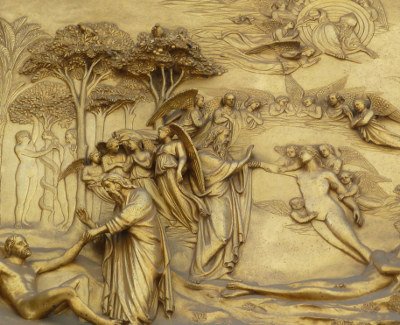 Lorenzo Ghiberti’s Gates of Paradise are a set of bronze doors that were made for the Florence Baptistery and took the celebrated Italian artist 27 years to complete. The doors that depict Old Testament scenes on 10 panels were finally installed in 1452 and profoundly influenced his contemporaries as well as the next generation of Italian Renaissance artists. The Gates of Paradise that are today admired in the Baptistery, however, are a copy. The original Ghiberti’s doors are held in the Museo dell’Opera del Duomo that is located just a few steps from the Baptistery.

Procession of the Magi by Benozzo Gozzoli 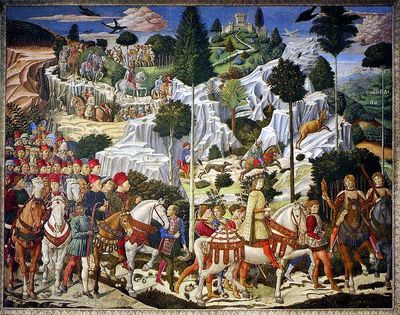 The Procession of the Magi, a series of frescoes that were created by Benozzo Gozzoli between 1459 and 1461 are considered the artist’s greatest masterpieces. The frescoes cover three walls of the Magi Chapel in the Palazzo Medici Riccardi of Florence, each depicting one of the three kings bringing gifts to baby Jesus. The procession starts on the east wall with the youngest king, continues on the south wall with the middle king and ends on the west wall with the oldest king. The procession of the youngest king with retinue also includes portraits of the Medici family and artist’s self-portrait.

Expulsion from the Garden of Eden by Masaccio 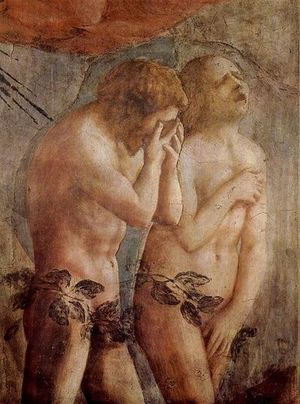 Like its title suggests, the fresco depicts the expulsion of Adam and Eve from the garden of Eden. It was created ca. 1425 and is a part of a larger fresco cycle in the Branacci Chapel of Santa Maria del Carmine in Florence that also includes frescoes by Masolino. Masaccio’s fresco, however, reveals a striking difference from Masolino’s late Gothic depiction of Adam and Eve on the opposite wall of the Brancacci Chapel. Unlike expressionless and static Masacio’s portrayal, Masaccio’s Adam and Eve reveal a great deal of emotion, while the Eve’s style of covering her naked body is nearly identical to the statues of the ancient Greek goddess of love Aphrodite (Venus Pudica). This suggests that the artist was probably inspired by classical antiquity.

Donatello’s bronze David, created ca. 1435-1440 for Cosimo il Vecchio de’ Medici was the first life-size nude statue since antiquity. It depicts Biblical David wearing only a hat and boots, with his foot resting on the head of the defeated Goliath. But the statue that has almost a feminine form also represents the ideal beauty of a male body. Donatello’s David was originally located in the courtyard of the Medici Palace in Florence but it was moved several times until the 1860s when it was placed to the Bargello museum where it remained until the present-day.

The Annunciation by Fra Angelico 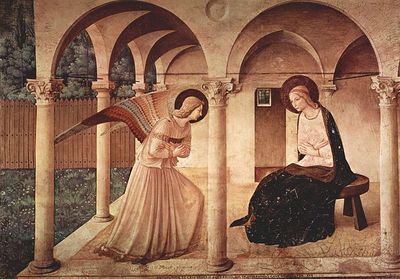 While the central themes of Fra Angelico’s artworks are conservative, his technique reveals that he followed the latest artistic trends of his time. The monk-painter’s Annunciation is the finest example of his brilliance which justifies his reputation as one of the finest Early Italian Renaissance artists. The fresco that tells the story of Virgin Mary being announced that she is pregnant by the angel Gabriel reveals an outstanding depth and sense for newly discovered central perspective. But at the same time, it also reveals a strive for simplicity, humility and chastity which corresponds with the rules of his Dominican order. The fresco was painted between 1438 and 1445, and can be admired in the San Marco convent (today a museum) in Florence.

St. George and the Dragon by Paolo Uccello 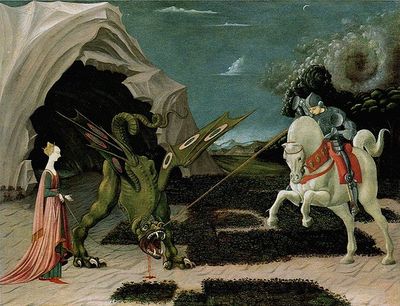 The painting tells the story of the 13th century legend about St George killing the plague-bearing dragon and rescuing the princess. It is a unique blend of International Gothic style and typical, Early Renaissance central perspective. The depiction of the rescued princess corresponds with the “rules” of the International Gothic style, while the dragon’s left wing intersects his lair exactly in the middle of the painting, forming a “V”. St George’s spear is perfectly aligned with the dragon’s wing as well as with the storm eye above St George, suggesting a divine intervention. The painting that was created about 1470 is on display in the National Gallery in London. 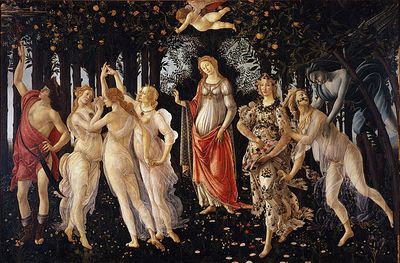 Botticelli’s painting depicts the Roman goddess of love Venus who is accompanied by the dancing Flora (on the right) being chased by god of wind Zephyr. On the left are depicted three Graces and the messenger of the gods Mercury. The meaning of the painting, however, remains a matter of debate. Most art historians believe that it represents Neoplatonic love but the most recent explanation is that Venus represents the goodwill or Humanitas who distinguishes spirituality (left) from material values (right). The painting that was created between 1477 and 1482 is on display in the Uffizi Gallery in Florence.

The Birth of Venus by Sandro Botticelli 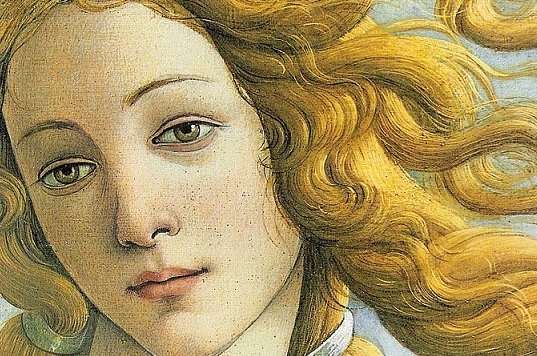 The most famous artwork by Sandro Botticelli and one of the greatest masterpieces of Early Italian Renaissance art depicts the goddess Venus emerging from the sea on a sea shell. The nude Venus who shyly covers her breasts and genitals in the style of Venus Pudica is blown by two wind gods to the shore where she is awaited by a nymph with a cloak. The painting is thought to represent the beauty of love in the Neoplatonic sense. The Birth of Venus was created for the Medici between 1482 and 1485 and just like Botticelli’s Spring, it can be admired in the Uffizi Gallery in Florence.

Flagellation of the Christ by Piero della Francesca 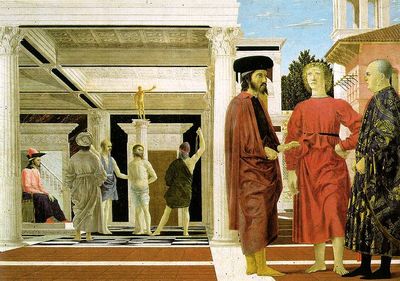 The Flagellation of the Christ is probably the finest example of Francesca’s outstanding sense for perspective. The title and subject of the painting are a well known scene from the passion of the Christ but the main focus is not the flagellation. Instead, the focus is on the three figures on the right, while the flagellation is set in the background. Whom the three figures represent and what is their connection with the Christ’s flagellation is unknown just like most things about the painting. It is unknown by whom it was commissioned, while the date of its creation – 1455-60 is an approximation. Francesca’s masterpiece that is only 23 x 32 inches is on display in the National Gallery of the Marche (Galleria Nazionale delle Marche) in the city of Urbino, Italy.

Lamentation over the Dead Christ by Andrea Mantegna 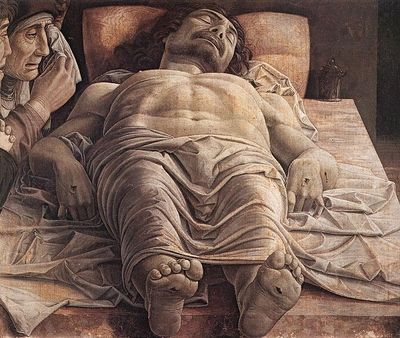 The Lamentation over the Dead Christ is a masterpiece by Andrea Mantegna whose works are admired for outstanding perspective and illusionist painting. Although the subject of the painting – mourning of the dead Christ – is a common theme of both the medieval and Renaissance art, Mantegna’s lamentation also reveals the influence of Classicism and interest in anatomy of the human body that would dominate the later Renaissance artworks. The painting is thought to be created around 1490. It is held by the Pinacoteca di Brera in Milan, Italy.