You are here: History Lists · Architecture · ﻿﻿﻿List of 20 Most Spectacular Art Deco Skyscrapers in the U.S.

List of 20 Most Spectacular Art Deco Skyscrapers in the U.S.

Art Deco was an art and architecture movement which emerged in France shortly before the outbreak of World War I in 1914 and spread around the world in the 1920s and 1930s. Named after the International Exposition of Modern Industrial and Decorative Arts (French: Exposition Internationale des Arts Decoratifs et Industriels Modernes), the style was hugely popular in the United States where it profoundly influenced the design of many architectural projects of the era, but in particular of skyscrapers. Some of the most spectacular Art Deco skyscrapers in the U.S. include: 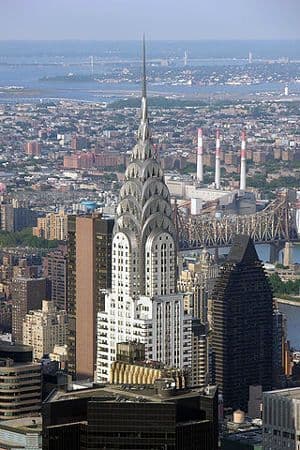 One of the finest examples of Art Deco skyscraper architecture, the Chrysler Building was built in 1930 to the design of the American architect William Van Alen (1883-1954). When completed, it was the tallest building in the world, rising 1,046 feet (319 meters) high. However, it held the record for less than a year. In 1931, it was surpassed by the Empire State Building. Despite that, the Chrysler Building remains one of the most famous skyscrapers, not only in New York City, but in the world. From 1930 to the mid-1950s, it served as the headquarters of the Chrysler Corporation. 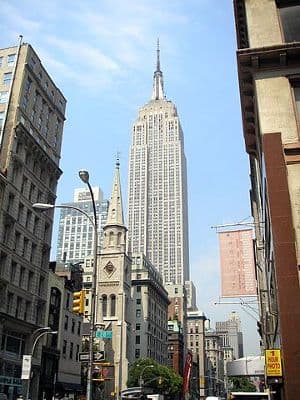 Another spectacular Art Deco skyscraper which was designated as the New York City Landmark and added to both the U.S. National Register of Historic Places and the U.S. National Historic Landmarks, the Empire State Building was designed by the American architect William F. Lamb (1893-1952). Rising 1,454 feet (443 meters) high, the Empire State Building became the world’s tallest building when completed in 1931, holding the record until 1970 when it was surpassed by the North Tower of the WTC Center. From the 9/11 Attacks in 2001 to the completion of the One World Trade Center in 2013, it was once again the tallest skyscraper in New York City. 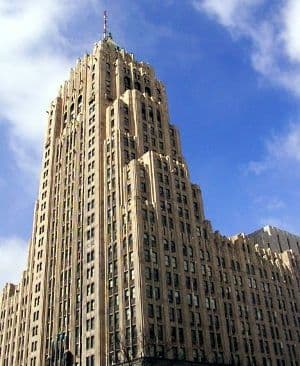 The Fisher Building may not be as tall as the Chrysler Building or the Empire State Building, but for Detroit, it is what the latter two are for New York City. Ever since its completion in 1928, the 444 feet (135 meters) tall skyscraper has been viewed as one of Detroit’s most beautiful buildings. But it is also regarded as one of the greatest masterpieces by Joseph Nathaniel French (1888-1975) who was its chief architect. Built by using marble and granite, both inside and outside, and topped with a tower covered with golf leaf tiles, the magnificent skyscraper came to be called “Detroit’s Largest Art Object”. Unfortunately, the tower was later covered with green tiles. 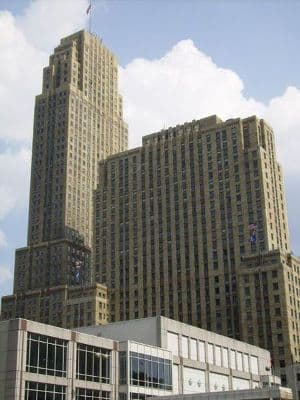 Cincinnati’s tallest building for nearly 80 years, the Carew Tower rises 574 feet (175 meters) high. Built between 1927 and 1931 to the design of Walter W. Ahlschlager (1887-1956), the Tower was surpassed only by the Great American Tower at Queen City Square in 2010. But while it is no longer the tallest building in Cincinnati, it is most certainly one of the most impressive ones. It is said to have a major influence on William F. Lamb who used it as the inspiration for his design of the Empire State Building. Also known as the home to the exquisite Hilton Cincinnati Netherland Plaza Hotel, the skyscraper was named after the former Carew Building over which it was built. 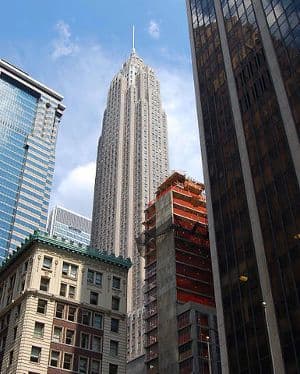 Now known as 70 Pine Street, the American International Building is a 952 feet (290 meters) tall Art Deco skyscraper in Manhattan, New York City. The former headquarters of the American International Group (AIG) was originally called the Cities Service Building after its commissioner - the City Service Company (predecessor of today’s Citgo Petroleum Corporation). Built from 1930 to 1932 to the design of architectural firms of Holton & George and Clinton & Russel, the iconic skyscraper is currently owned by Rose Associates and Eastbridge Group. The new owners converted much of the former office space into luxury rental apartments. 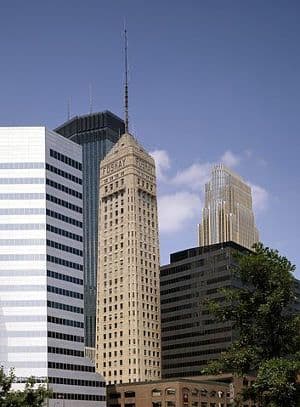 The Foshay Tower is a 607 feet (185 meters) tall skyscraper and one of the most famous landmarks in Minneapolis, Minnesota. It was built in 1929 to the design of the French-born architect Léon Eugène Arnal (1881-1963) who modeled it after the Washington Monument. Named after its commissioner, the controversial businessman Wilbur B. Foshay (1881-1957), the Tower was Minneapolis’ tallest building from its completion until 1972 when it was surpassed by the IDS Center. After an extensive renovation that lasted from 2006 and 2008, the landmark building reopened as a luxury hotel under the name of W Minneapolis – The Forshay. 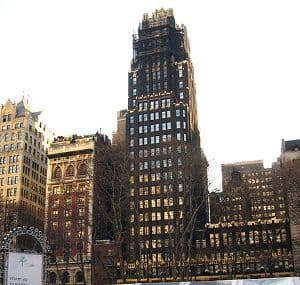 This New York City Landmark is a splendid example of the so-called Gothic Art Deco style which, like its name suggests, is a mixture of Gothic and Art Deco architectural styles. Later renamed to the American Standard Building, the black-and-gold masterpiece was built to the design of architects Raymond Hood (1881-1934) and J. André Fouilhoux (1879-1945) for the American Radiator Company from 1923 to 1924. In 1998, the 23-story skyscraper was bought by the American real estate magnate Philip Pilevsky who converted it into a hotel (The Bryant Park Hotel). 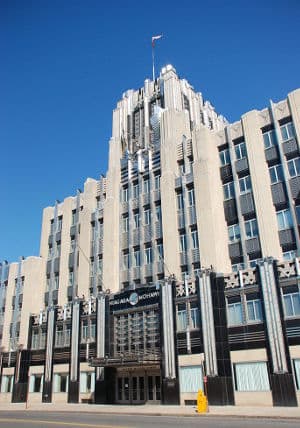 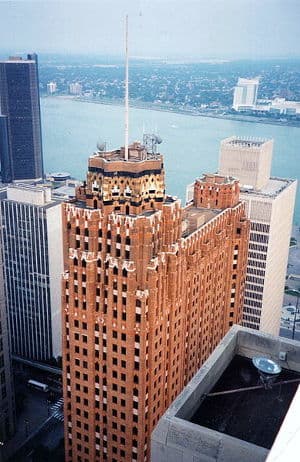 Also referred to as the Detroit’s Cathedral of Finance, the Guardian Building is one of Detroit’s finest Art Deco skyscrapers. It is also considered one of the prime examples of the Mayan Revival architecture which was popular in the 1920s and 30s, and included elements inspired by the pre-Columbian Mayan architecture. Initially called the Union Trust Building, the skyscraper was commissioned by the Union Trust Company. It was completed in 1929 to the design of architect Wirt C. Rowland (1878-1946) from Smith, Hinchman & Grylls (since 2011 known as SmithGroupJJR). Since 2007, the Guardian Building has been owned by the Wayne County.

Chicago Board of Trade Building 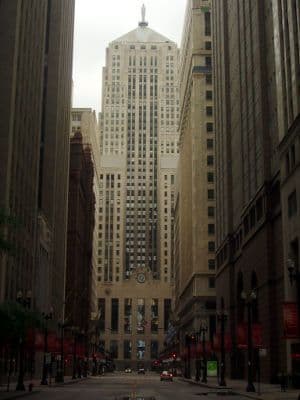 Also known as the tallest Art Deco skyscraper outside New York City, the Chicago Board of Trade Building is today only in the 41st place of the tallest buildings in Chicago. But at the time of its completion in 1930, it was the tallest building in “The Windy City”. And its height - 605 feet (184 meters) - remained unsurpassed until 1965. Also referred to simply as the CBOT Building because it was built for the Chicago Board of Trade (CBOT), the Chicago icon was in 2012 purchased by GlenStar Properties LLC and USAA Real Estate Company. Its design is the work of the architects from Holabird & Root. 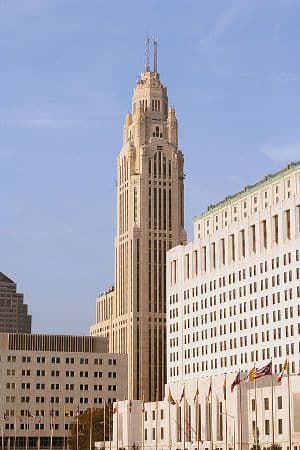 The LeVeque Tower is an impressive Art Deco skyscraper in downtown Columbus, Ohio. It was intentionally built to stand 555.5 feet (169.3 meters) tall in order exceed the height of the Washington Monument for 1 foot. The building’s commissioner, the American Insurance Union (AIU), thought it would be good for promotion. The tallest building in Columbus from its completion in 1927 until 1974 was designed by architect C. Howard Crane (1885-1952) who is also known for designing the Fox Theatre in Detroit. Originally called the American Insurance Union Citadel, the LeVeque Tower has been undergoing renovation since 2011 when it was bought by the Tower 10 LLC. 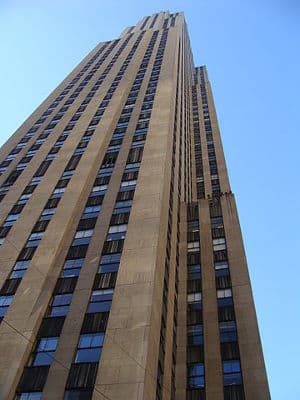 The Rockefeller Center is a complex of two sets of buildings which were built by the Rockefeller family in the heart of Midtown Manhattan. The first set encompasses 14 buildings that were built in Art Deco style in the 1930s, while the second set consists of 4 skyscrapers in international style from the 1960s and 1970s, and the 2001 completed Lehman Brothers Building. The complex is dominated by the 30 Rockefeller Plaza (formerly known as the GE Building) which is best known for being home to the National Broadcasting Company (NBC). On July 1, 2015, the Raymond Hood’s 1933 completed Art Deco masterpiece was renamed after the NBC’s owner Comcast to the Comcast Building. 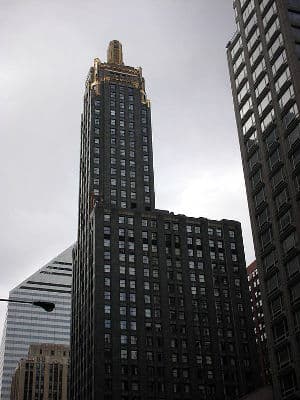 The Carbide & Carbon Building is a 503 feet (153 meters) tall Art Deco skyscraper which, while it may not be among the tallest buildings in the Chicago skyline, is definitely one of its most iconic structures. Covered with polished black granite and adorned with green terra cotta featuring gold leaf details, the skyscraper was built in 1929 to the design of the Burnham Brothers - Daniel (1886-1961) and Hubert (1882-1968). They were the sons of the celebrated American architect Daniel H. Burnham (1846-1912) who was one of the central figures in history of the skyscraper. Since 2004, the Carbide & Carbon Building has been home to the Hard Rock Hotel Chicago. 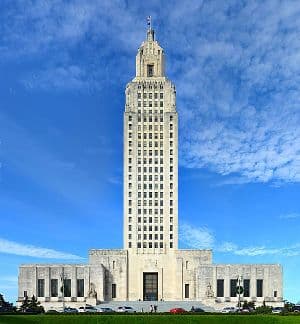 Rising 450 feet (137 meters) high, the Louisiana State Capitol is the tallest building in Baton Rouge and the tallest seat of state government in the United States. Home to the House of Representatives, the Senate and the Governor of Louisiana, the skyscraper-capitol was built in Art Deco style between 1930 and 1932 to the design of the architects from Weiss, Dreyfous and Seiferth. They are said to be inspired by the design of the Nebraska State Capitol which was at the time still under construction. The building of the Louisiana State Capitol was initiated by Huey Long (1893-1935) after being elected the Governor of Louisiana in 1928. 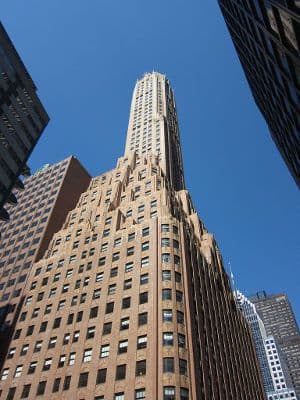 Also referred to as the 570 Lexington Avenue (after its location), the General Electric Building is a 640 feet (195 meters) tall office building in Midtown Manhattan. It was originally called the RCA Victor Building to indicate its commissioner - the RCA-Victor which, however, would soon move to the 30 Rockefeller Plaza (now Comcast Building). The 1931 completed Art Deco skyscraper at 570 Lexington Avenue, on the other hand, became the headquarters of the General Electric. Currently owned by the Feil Organization, the General Electric Building was designed by architect John Cross (1878-1951) from the architectural firm of Cross & Cross. 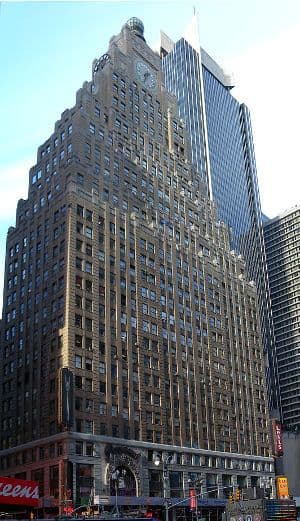 When completed in 1927, the 1501 Broadway was the tallest structure in the Times Square. Also called the Paramount Building, the 391 feet (119 meters) tall skyscraper was built as the headquarters of Paramount Pictures. Its spectacular design is the work of the brothers Cornelius Ward Rapp (1861-1926) and George Leslie Rapp (1878-1941) from the Chicago-based architectural firm of Rapp and Rapp which specialized in the design of movie palaces. In addition to housing Paramount Pictures offices, the Art Deco icon in the Times Square also used to house a 3,600+ seat movie palace. Unfortunately, it closed in 1964 and was later converted into office and retail space. 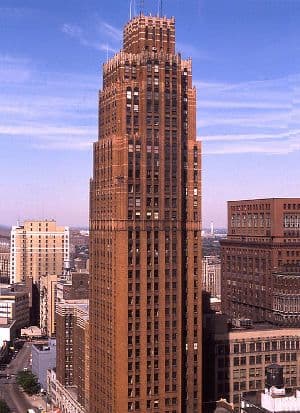 The David Stott Building is a 437 feet (133 meters) tall office building in the heart of Detroit, Michigan, that was built to the design of John M. Donaldson (1854-1941) and Walter R. Meier (1887-1931) from the architectural firm of Donaldson and Meier. Completed in 1929, the Art Deco masterpiece was commissioned by the Stott Realty Company which named it after its founder, the Detroit businessman David Stott (1853-1916). The building changed hands many times over the following decades, most recently in 2015 when it was purchased by Dan Gilbert’s Bedrock Real Estate Services LLC. 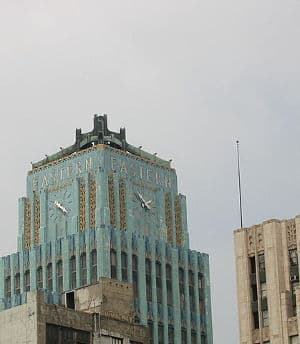 Also called the Eastern Columbia Lofts, the Eastern Columbia Building is according to many the most beautiful Art Deco building in Downtown Los Angeles, California. Built in 1930, the skyscraper rises 264 feet (80.5 meters) high even though the upper height limit in Los Angeles was at the time was only 150 feet. The Eastern Columbia Building was allowed to exceed that limit because its four-sided clock tower was exempt from height restrictions. Built to the design of architect Claud Beelman (1883-1963), the skyscraper originally housed offices and store of the Eastern Outfitting Company and the Columbia Outfitting Company. In 2004, it was converted into a luxury apartment building. 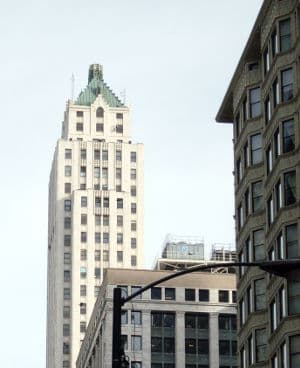 Rising 551 feet (168 meters) high, the Pittsfield Building is an Art Deco masterpiece featuring Gothic elements. It was designed by the architects from Graham, Anderson, Probst & White, an architectural firm which built some of the greatest Chicago landmarks and profoundly influenced the city’s architecture. The Pittsfield Building was commissioned by the heirs of Marshall Field (1834-1906), the founder of the Marshall Field’s. They named it after the city of Pittsfield, Massachusetts, where Marshall Field got his first job. Sections of the iconic skyscraper, which opened in 1927 as an office building, were in the early 2000s converted into student housing and apartments. 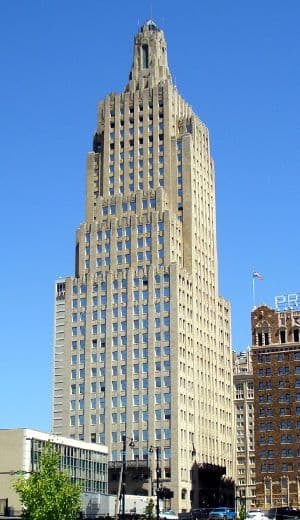 Also known as the KCP&L Building, the Kansas City Power and Light Building is a 476 feet (145 meters) tall Art Deco skyscraper in the heart of Kansas City, Missouri. It was built in 1931 and served as the headquarters of the Kansas City Power and Light until 1991. The tallest (habitable) building in Missouri from its completion until 1976 when it was surpassed by the One U.S. Bank Plaza, the skyscraper was designed by the local architectural firm of Holt, Price & Barnes. After several failed attempts of redevelopment since the early 1990s, the renovation works and conversion into more than 200 luxury apartments finally started in 2014.