You are here: History Lists · Architecture · 10 Stonehenge Facts and Information about its History

10 Stonehenge Facts and Information about its History

There are countless legends about the origin of Stonehenge and its purpose, but it remains one of the worlds great enigmas. Who built it? How was it made? When was it built? And most intriguing of all. What was Stonehenge used for? Below are ten facts about Stonehenge that look to answer these age-old questions. 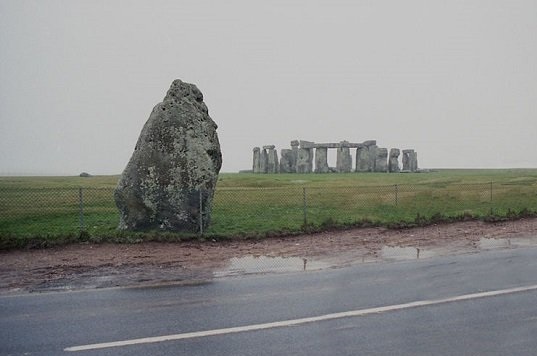 Stonehenge is unique because there is nothing else like it the world. It stands on a UNESCO World Heritage Site in Wiltshire, England, 2 miles west of Amesbury and 8 miles north of Salisbury and its giant stones can be seen from miles around. Less than half of the incredible structure still stands, but it remains an icon of Britains prehistory, and dates back to a time before ancient Egypt built its first pyramids.

When was Stonehenge discovered? 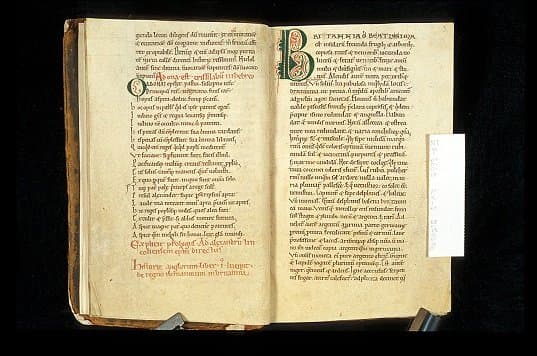 The ancient culture who built it must have had a name for it, but by the time the Romans invaded Britain in 54 BC, Stonehenge was already 2000 years old, and its history had long been forgotten. The first documented reference to Stonehenge was in AD 1130 when Henry of Huntingdon was commissioned to write a history of England and record its natural wonders; This was the first time that people became aware of Stonehenge as a remarkable place.

What does Stonehenge mean? 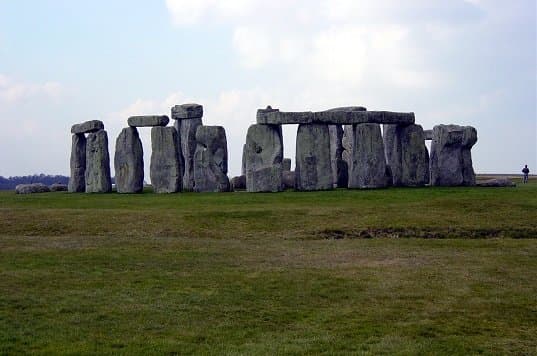 The word Stonehenge is early English and translates literally into hanging stones. The “Henge” suffix has been given to numerous monuments in the British Isles. Archaeologists use it as a generic term describing any prehistoric circular earthwork enclosed by a bank and a ditch. The irony is Stonehenge doesn’t quite a fit the definition. 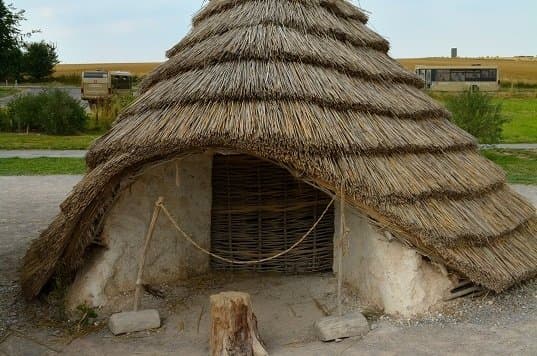 Around 3000 BC at the very dawn of civilization a simple farming people with only primitive skills and tools flourished for a time then around 1200 BC society in Britain began to change, it became more militarized, and the landscape was soon dominated by forts rather than sacred monuments which were forgotten. We refer to this period as prehistory before written language making it very difficult to look back that far in the archeological record and see who they are; This leaves several possibilities for who was responsible for building Stonehenge. It’s also possible that different peoples built different parts at different times.

When was Stonehenge built? 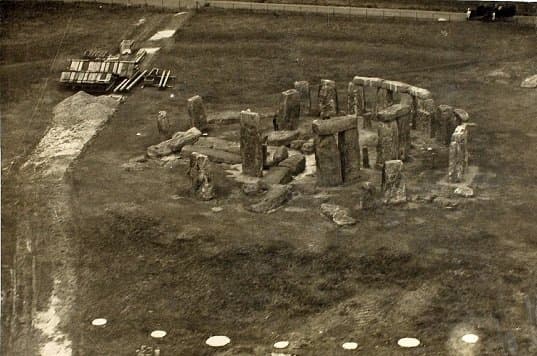 Richard J. C. Atkinson, a professor of archeology, concluded that there were three phases of construction. Stonehenge was erected first around 3000 BC as little more than a circular bank and ditch with the main structure built of wood. Stonehenge II began about 2150 BC and continued for 150 years; this was when the first of the bluestones were moved into place. And the last changes were made in the early Bronze Age, between 2100 to 1500 BC which brought the outer circle and trilithons; this is the ruins of Stonehenge that we see today.

What was Stonehenge made of? 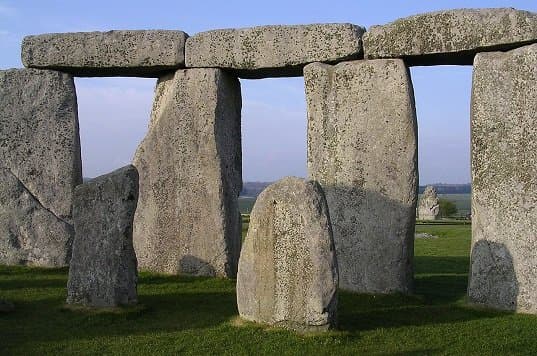 The largest stones are made of sarsen, likely local origin no more than 24 miles away at Marlborough Downs. But each of these stones weighs up to 50 tons which are as heavy as about six elephants. It remains an enduring mystery as to how precisely they were moved, especially through the marshes, valleys, and woodland. The smaller more ancient bluestones are made from spotted dolerite, a volcanic rock which is only found in one place in Britain, Preseli Mountains in South Wales. There has been a big controversy how our prehistoric ancestors got the bluestones weighing up to four tons each such a vast distance, more than 125 miles away. One theory is that they were brought downriver through the Bristol Channel on prehistoric rafts, then hauled overland by teams of men and oxen.

How was Stonehenge built? 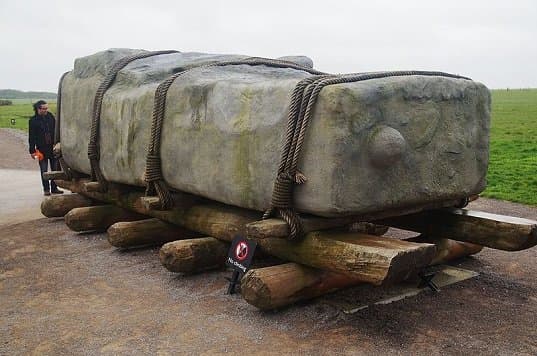 The enormous sarsen stones, a local sandstone, are three times harder than granite yet they had to be shaped by the ancient stonemasons using the only tools the builders had at the time, which were made of bone, stone, and wood. So shaping them would have taken many years. The upright sarsen base was sunk deep into the ground and tapered at the top to form protuberances which fit hollows on the bottom of the lintels similar to carpentry style joints. Amazingly the top of the lintel is perfectly level to within inches despite the fact that the ground below them is uneven. Precisely how these enormous stones were raised into place remains speculation, but most likely using a system of leavers. 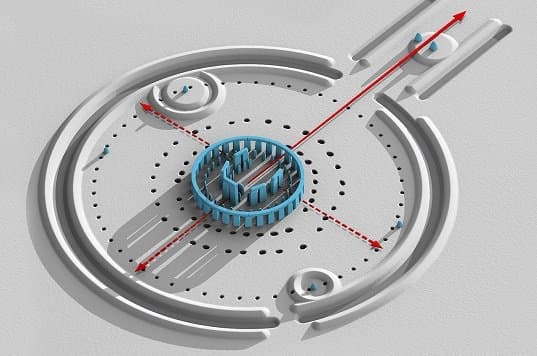 After the final build phase in 2100 BC, the enormous blocks of sarsen stone formed the outer circle of the monument. Immediately within the sarsen circle are smaller upright stones called bluestones. Inside the bluestone circle is a horseshoe arrangement of five trilithons. Made of sarsen stones each trilithon consists of two uprights topped by a horizontal lintel. The trilithons are unique to Stonehenge, and their purpose and intent are unknown. At the center is the Altar Stone which is neither sarsen nor bluestone and therefore may have had a special significance for the builders of Stonehenge.

What was Stonehenge used for? 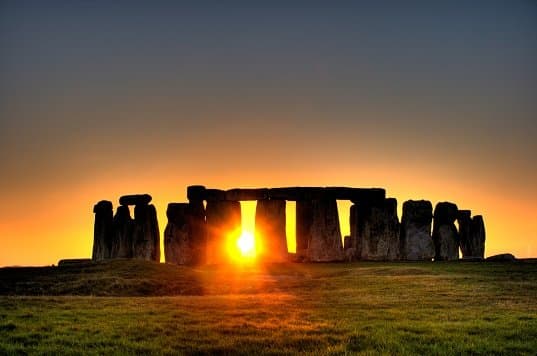 There is still no consensus as to precisely why Stonehenge was built, but it was likely a ceremonial center where people gathered for ritual and festivity. In 1965, professor Geral Hawkins put forward a hypothesis that Stonehenge was used to mark significant times of the year, especially the approach and arrival of the summer and winter solstices, the longest and shortest days of the year. And experts now agree that the axis of Stonehenge is solstitially alined, and that was almost certainly deliberate; This suggests that Stonehenge was a solar temple.

What are the solstice celebrations at Stonehenge? 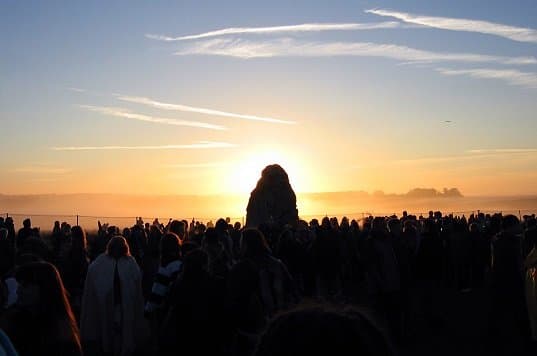 For many, Stonehenge is a spiritual and magical place, and for two of the most sacred days for Pagans, Druids, and Witches, thousands of people gather around the Stonehenge monument. On the summer solstice to celebrate and watch dawn break on the longest day of the year. On the winter solstice, the celebration takes place after the longest night of the year, looking ahead to the start of spring which marks the “rebirth of the sun.” It told the people that the cycle of life would soon begin again. That soon it would be time to plant and the earth would bloom again.